Mama and The Help 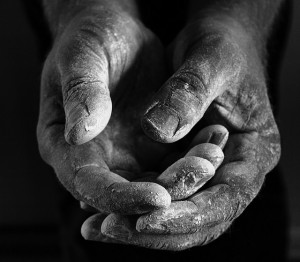 In memory of my mother

Across the street at the neighbor’s, Lula wore men’s white cotton socks with sandals and came outside to greet the mailman every afternoon. She was slow moving and wide, with skin the color of wood varnish.

“Come and let me love on you,” she’d say, but Mama always stiffened a bit, as though she were not quite comfortable.

We were in the utility room. Mama hauled a pile of tangled wet sheets out of the washing machine, then dumped them into a plastic laundry basket on the floor. The corners of the basket were split and bit my skin when I stuck my fingers inside them.

“Maids steal,” Mama said, lifting the basket over her head and tramping down the hall.

I wanted to know if she could balance it on top of her head like the African women in the National Geographic, but when I asked, Mama smacked her lips and acted like she didn’t know what she was talking about.

I followed her through the family room where the television, always on, was blasting The Days of Our Lives (“Like sands through the hourglass,” some man named McDonald Carey always said at the beginning of the show) and out the back door into the yard. The screen door flapped shut, trapping the cold breeze from the Fedders air conditioner inside the house.

Mama dropped the laundry basket into the grass under the clothesline that was strung back and forth between two metal fans that looked like television antennas. One time not long after she and Daddy had gotten married, she told me, when they were still living in Monticello, they had a maid who stole Daddy’s medical fraternity pin right out of the jewelry box on the bedroom dresser.

I asked what a fraternity was, and Mama explained that while sometimes it just meant a group that men joined in order to socialize, in this case it meant a special club for men who were going to be dentists, that you had to be asked to join. You couldn’t just volunteer, she said, lifting a yellow and orange striped sheet from the pile in the basket. She flapped it open and pinned one end to the line with a wooden clothespin, the grabbed another clothespin out of the basket to clamp down the other side.

The sun was high in the sky and the air was filled with the hot smell of cut grass. The maid’s name was Francine. That fraternity pin was eighteen karat gold, Mama said, and was trimmed with real pearls. What was a maid going to do with a thing like that?

She hauled another sheet out of the basket, one that was printed with giant pink and yellow daisies, then asked me in a completely different tone, like the way she would talk to somebody at the store: “Would you hand me a clothespin, please ma’am?”

I grabbed a clothespin from the basket and held it out to her. I noticed that all of the sheets in the basket were either striped or flowered or had swirls on them that Mama called paisley, and seeing them there, all jumbled together, I wished that we had sheets like the ones in detergent commercials on TV, snowy layers of just plain white, the kind that babies crawled around in.

I flopped on my back in the grass and closed my eyes, but I could still feel the sun sting through my eyelids.

Mama’s voice moved back and forth as she continued to hang the sheets. Another time, she said, they had a maid who had shown up for work one day with a cut lip and two black eyes because her boyfriend had beaten her up the night before.

That was when the children were small, she said. Because I was the youngest, my mother never referred to me as one of “the children.”

She told my Daddy had made the maid a cold pack, then took her down to the colored hospital and talked to Dr. Washington himself.

Both of them were worried sick, she said. She added, “That one’s name was Opal.”

After Integration and all, she said, maids were too much trouble. Even in this country club town with all these crazy people.

The sun flared behind my eyelids. Francine, Opal, Lula—names that sounded like the birthstones you could get at the drugstore. Mine was August, something called peridot, but I wanted to be May, which was emerald. Emerald was cool, like the way Lula’s hands always felt when she said, “Let me love on you,” and put them around my shoulders.

I sat up and opened my eyes; the sun poured into them and I squinted. I saw that the entire clothesline was hung with sheets, stretched from end to end, hanging down almost to the ground, their hems curling and their middles puffing out slightly in the hot air, all of the designs and colors running together.

They were not a jumble anymore, but a magic tent, a wild castle. I scrambled up from the grass and walked down through the cool waving aisles, running the palms of my hands down the wet cotton. It was a place for princesses or fairies.

I came out and Mama was lifting the plastic laundry basket to carry it back inside. I saw that her face and neck were red and her gray hair, which she had fixed in a puff at the beauty parlor every Saturday morning, was drooping and coming out of its curl. My own neck and arms were sweaty under my T-shirt, which was damp and stuck to my skin.

“I don’t see as we even need a maid,” she said, looking at me once before she started off across the grass. Those eyes. “Haven’t I done enough?”

The photo above is credited to Magnus Branden, used under the Creative Commons License.

March 2, 2015 Exercises for Lent
Recent Comments
0 | Leave a Comment
Browse Our Archives
get the latest from
Catholic
Sign up for our newsletter
POPULAR AT PATHEOS Catholic
1