God in the Godforsaken Places 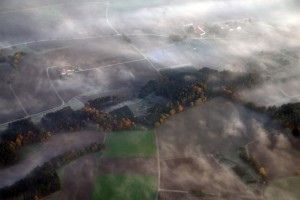 I live in the shadows of Washington, D.C. It’s a big place and said to be a very important one in geopolitical matters. I trust them on that. But I’ve found that in most cities its size—in most cities of any size, for that matter—many of the citizens share a rather parochial disposition about the rest of the country.

The other day, a longtime resident who comes to this metropolis by way of an even larger one was telling a story at work. Though an educated man, and a world traveler, he didn’t really know where the action in his narrative took place. So he gestured towards the west with a dismissive flip of the hand and named a few states, randomly: “Kansas, or Nebraska, or some other Godforsaken place,” and went on to finish the tale.

I smiled at that, because even though it was not the case this time, whenever that expression is used—be it in reference to states or towns or general vicinities—it is with fair regularity that one or two of the places named include those where I was born or grew up or went to school.

If not, then it’s in reference to a neighboring spot that’s just like them. And even when the place mentioned is some locale I’m not attached to, I get the idea: “Some Godforsaken place” means a spot that no sane person would want to be in if he could help it.

Demographers could point to the numbers that show metropolitan areas growing larger as they pull within them, like planetary satellites, an ever-increasing population. And social scientists could explain how civilizations move from agricultural economies, which need fields, that in turn support towns and hamlets, to industrial economies, which need transportation infrastructures, that in turn support cities, to what we have now—which is from what I can tell a kind of telecommunications economy, which doesn’t need the land at all, that in turn supports only a few little guys who know how the thing works, and who can hold the rest of us bloody hostage whenever they feel like it.

I have nothing against urban dwellers; I appreciate the fact that they probably couldn’t live in the places where I’ve lived. The charms I find there would not resonate for them, nor would they last very long even if they did. What I pine for—miss deeply, in fact—not all would; but then I was raised in places without airports and am comfortable in them.

But all that aside, the expression itself—“some Godforsaken place”—pre-dates any of the civilizational shifts I’ve mentioned. It existed even when the world mostly farmed or lived beneath smoke stacks. And back then, when it was spoken, its original intent was that the place referred to had been deserted by destiny—a barren wasteland devoid of any comforts to human society, one that God himself would not shine his face upon.

The irony of it all is that the modern-day speakers of the phrase have often forsaken God themselves; and the places that they mention are often those rural, remote locales where he’s still believed in. God is alive and well in the hinterlands and backwaters, and that is precisely the reason that the urbanites forsake them—not because he isn’t there, but because he is.

Which brings up the question of what such people mean by “God,” since at this point he is surely only a metaphor for them. If God is the organizing influence in one’s life, which is probably the most they’d concede, then the concept is no more or less than the zeitgeist—venues, restaurants, music—high culture.

The lack of such things in the frontier of what they call “flyover country,” whose dwellers must content themselves with an occasional Applebee’s on the frontage road, the terpsichorean delights of line dancing at an American Legion hut, or social extravaganzas revolving around duck season, make their regions like the vaguely-perceived lands depicted on those New Yorker covers from not too long back, a “New Yorker’s Map of America”: Manhattan, Boston, and Connecticut are clearly delineated; the rest of the country is amorphous and marked with “There Be Dragons” signs.

I, who believe God is a being, agree that he is in the things the city dweller loves. But the difference is that the city dweller would argue high culture exists, and shines its brightest, because urban areas are not benighted by the likes of something so primitive as the concept of “God as being.” I’d say they are often the only remnants of him left in such places. The churches may be empty in the metropolis, but the forum is full, since God rests in the clefs and the trebles, resides between the plié and the entrechat.

God forsakes no place, but lives richly in the interstices that man has squeezed him into. God is ligament and cartilage, and the beauty of the grand gesture on the majestic stage is enabled because he is there—quiet, unseen, but nevertheless vital.

Perhaps he is most noticeable in places where the cultural resume is sparse—the fortune-blasted towns of shuttered stores and peeling steeples; perhaps that is their true wealth. But in any event, that he is, and what he is, and where he is, does not depend upon such things as the length of a French menu, or the dazzle of a Broadway marquee.

God does not confuse himself with what Zagat and Baedeker have to say, or with how many stars they have to give him. He made the stars, and is therefore wholly unperturbed by their opinion of him.

A. G. Harmon teaches Shakespeare, Law and Literature, Jurisprudence, and Writing at The Catholic University of America in Washington, D.C. His novel, A House All Stilled, won the 2001 Peter Taylor Prize for the Novel.

Picture above by Doc Searls, used through a Creative Commons license.

March 9, 2015 Sojourners in the Darkness
Recent Comments
0 | Leave a Comment
""It doesn’t matter when you start the Sinatra Christmas playlist or put up your tree. ..."
C_Alan_Nault How to Win the War on ..."
"Yup."
Max Marvel Finding My Inner Calamity Jane
"I an confused by the use of "aural" here: "In The Gutenberg Galaxy, he explained ..."
William G II The Gutenberg Imagination
"My friend is looking for a Pepper Smith he served in the army with, was ..."
Christine Budnack The Love Song of Pepper Smith
Browse Our Archives
Follow Us!