Sojourners in the Darkness 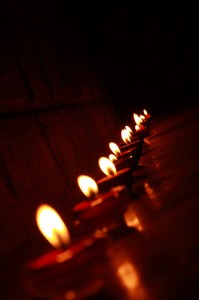 My mother, an uneducated woman in her sixties, said she would ask [his murderer] to enter her house and ask God to open his eyes because he was the reason her son entered the kingdom of heaven.

—Beshir Kamel, brother of the martyrs Bishoy and Samuel

A footnote in my Bible at the end of Genesis reads: “The life that began in Paradise ended in a coffin in Egypt.”

What ended was the beginning of a story that commenced when man insisted on seizing the creation pen for himself, only to find that his words spring from poisoned lips. So faithful Joseph was tucked into the earth, his last plea lingering in the ears of his brethren: “Don’t leave my bones behind when you depart this land.”

Gershom was the firstborn of Moses, and his name means sojourner there. Sojourner there, because when your heart dwells in a different home, there is the name of every other, lesser place. Gershom was named before Christ came as the doorway, preaching the coming kingdom and the kingdom already present, bridging there and here and claiming it for children. Such a curious kingdom, arising from a tale so at odds with the stories men write.

Gershom was a sojourner, as was his father and his father before him, as were his people. They came to Egypt seeking bread and they learned slavery there. The place of their salvation became a den of bondage, and they were so ready to stoop to the plow for a pot of meat, so quick to lash out at troublemakers like Moses and Aaron, come to liberate them in the name of this strange God in a cloud, God in a tent, God who bestows power on shepherds rather than kings, God who doesn’t tell the story right.

They were slaves and they were well-suited to it, as we all are, because men are forever eating the pigs’ food and making graves of their beds.

We are forever digging our graves, and God is forever yanking us from them, as Joseph from the pit, as Noah from the ark, as Jonah from the whale’s gut. Joseph’s brothers came to Egypt seeking bread, and they died with their bread, and their children after them. When eventually God came to set Jacob’s descendants free, they did not want to go, not when they saw that freedom requires faith, and faith demands a price.

But God would not let go. “Let there be darkness over the land of Egypt,” he said, “a darkness that may be felt.”

These stories are now fantasy to us, or nearly so. Abraham holds the knife to Isaac’s throat, Jacob wrestles a holy messenger, David fells Goliath—the action rises and falls in an old familiar tale of sin and blood and redemption, of endless genealogies, of a recalcitrant flock, of a bitter vine, and we grafted onto that vine thanks to Jesus, sweet Jesus, Jesus teaching, healing, then climbing his cross, and after that dread day, the empty tomb and the upper-room church, then the letters from Paul and a few others, then something about the end times, hallelujah, and now a Bible in every house and praise choruses on our tongues, and after these our Sunday dinners and perhaps the shake of our heads at the bad news coming from those ancient territories, those darkened world’s corners so very far from the God-blessed U.S.A.

God’s people traveled into Egypt for food, even as their remnant now travels from it seeking work, as thirteen young men traveled from their Nile village of El-Aour, along with eight from other locales, these twenty-one joining scores that departed villages and towns, hoping to feed their families just as Joseph’s brothers once did. They were sojourners there.

And we are here. Sometimes we forget here isn’t home, just as we forget the people sojourning there are our brothers and sisters. They shuffle the same windswept and sandy roads our adoptive forefathers traveled, darkening the sand with their blood, with their tears and with blood.

“Their blood,” said Pope Francis of the twenty-one Egyptian fishermen beheaded on a Libyan beach, “confesses Christ.” Their blood confessed after their throats could not, and if you want to know where Christ is in the world, look to this beach, to this blood-reddened surf so very far from us. Look and wonder at God’s restraint, and at the awful price of faith.

The people of Israel bowed and worshipped when they saw the signs Moses bore from God, but when Pharaoh increased their burdens as punishment for asking to worship God in the desert, they rebuked their prophet. It’s easy to have faith in signs and wonders, but another thing entirely to persevere when miracles cease.

“Signs,” says another note in my Bible, “are for unbelievers.” But who among us is willing to labor without them?

I need a sign every day, weak as I am, every day. What then to say about the man from Chad, working alongside twenty Egyptian Christians, an unbeliever who witnessed their unshakeable faith in captivity, who chose, subsequently, to kneel alongside them, to have his own throat laid open on that beach? What to make of his voice added to theirs, crying Ya Rabbi Yasou—O My Lord Jesus—asking to be remembered in the kingdom?

O my Lord Jesus, he said, they said, while in my comfortable here I demand, like the thief on Christ’s left, a sign. Descend this cross, I say, and take me with you. But his place is there, for his people are there, every day, every day, and who among us has the faith to join them?

Tony Woodlief lives in North Carolina. His essays have appeared in The Wall Street Journal and The London Times, and his short stories appeared in Image, Ruminate, Saint Katherine Review, and Dappled Things. His website is www.tonywoodlief.com.

The picture above is credited to Asha Susan, used under a Creative Commons license.

March 10, 2015 The Art of Evil
Recent Comments
0 | Leave a Comment
""It doesn’t matter when you start the Sinatra Christmas playlist or put up your tree. ..."
C_Alan_Nault How to Win the War on ..."
"Yup."
Max Marvel Finding My Inner Calamity Jane
"I an confused by the use of "aural" here: "In The Gutenberg Galaxy, he explained ..."
William G II The Gutenberg Imagination
"My friend is looking for a Pepper Smith he served in the army with, was ..."
Christine Budnack The Love Song of Pepper Smith
Browse Our Archives
get the latest from
Catholic
Sign up for our newsletter
POPULAR AT PATHEOS Catholic
1