The Arts and Faith Top 25 Films on Memory 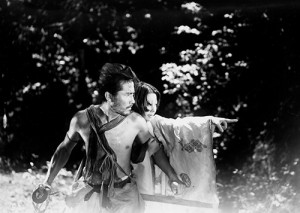 For me, there is no more acute reminder of the passing of time than the Academy Awards’ “In Memoriam” montage. Every year, as I watch the parade of faces and names that will never again illuminate the screen, it’s a reminder of the fragility and brevity of life. Even the great icons are inevitably absorbed by the past.

Cinema, after all, is a kind of collective memory. Films are both time capsules, preserving the original period of their release, and a collection of thoughts and ideas that extend from the artists and craftsmen that lived in its time.

Thus, the Arts & Faith Top 25 Films on Memory is an exercise in commemoration. It is an attempt by Image’s Arts & Faith online community to celebrate and examine the unique ability of cinema to speak to the theme of memory.

Appropriately, this list conveys something of the broad arc of cinema history. These twenty-five films, voted on by the Arts & Faith members after a lengthy nomination and voting process, cover numerous genres, cultures, and decades, featuring films by some of the most widely acclaimed and influential filmmakers of their time.

These movies all speak to the experience of memory, a theme that cinema is particularly well-suited to explore. The edit—one of the most foundational elements of cinematic language—allows images to be linked together in the space of time. This technique allows film to capture the associative patterns of memory perhaps better than any other art form.

These connections are both obvious and mysterious. Filmmaker Raul Ruiz wrote that “when we see a film of 500 shots, we also see 500 films,” speaking to the sometimes inexpressible way that the images in a film seem to be independent, even as they are part of a whole. The interplay between images and a film’s soundtrack adds further complexity, further room for connections.

So it should not be surprising that there are numerous films on this Top 25 that attempt to convey something of a psychological state, as is the case with David Lynch’s Mulholland Drive or Terrence Malick’s The Tree of Life. These films pursue emotion rather than plot, spiraling from fear to hope, despair to joy. These films reach out for inexplicable and inexpressible, the fears too great to recognize or the hopes too glorious to explain.

The idea of memory is of particular interest to the Arts & Faith community, a group comprised of cinephiles shaped by a mutual interest in faith and spirituality. After all, religion is built upon a kind of collective memory, enshrined in traditions and preserved teachings and experiences, shared records of hopes and faith. It follows that the list features the work of filmmakers of faith as well as those whose work resonates with the essential yearnings that lie at the center of religious traditions.

But memory also cuts to the very center of personhood: memories are what define and shape us, give us personality, give us life. Many of the films on this list are fascinated by the thorny epistemological issues that lie in the intersection of thought and memory. Citizen Kane presents a human being as an unsolvable puzzle, assembled only from the fragments of other individuals’ testimonies. Memento explores what happens to an individual when he no longer has memory to anchor him. 2046 follows one man’s recollections as he attempts to comprehend the common thread between his disparate romantic experiences, revising the narratives as he revisits them.

What is suggested over and over again by the films on this list is that the exploration of memory is, in and of itself, a kind of spiritual quest, a quest for transcendence or truth. To navigate the world, we must consider the testimonies of others as well as the testimonies we give to others about ourselves, perpetually sorting lies from truth.

This is a difficult struggle and it will not always be a successful one—many of these films are dark visions about what happens when we get lost in the corridors of memory—but the essential questions and yearnings remain the same.

Akira Kurosawa’s Rashômon, which tops the list, is the perfect introduction to this cinematic conversation. This masterpiece, in which the facts of a murder are retold in conflicting versions by different witnesses, so perfectly captures the thorny and profound questions surrounding memory. What happened? Who was there? Who were they? What did they do? What does this mean for us and the future?

So when you look at the Arts & Faith Top 25 Films on Memory, what you are looking at is really an ongoing conversation about a dialogue that has occurred throughout cinema history, between and within these films. I hope you find it as fulfilling and fascinating as we have.

Ryan Holt is a member of the Arts & Faith community and is the founder of the film blog I’ve Seen That Movie Too. His essay, “The Road to the Paradise Café: The Spirituality of Brian De Palma,” was recently published in the third volume of Faith and Spirituality in Masters of World Cinema.

March 4, 2015 Remember You Are Dust
Recent Comments
0 | Leave a Comment
""It doesn’t matter when you start the Sinatra Christmas playlist or put up your tree. ..."
C_Alan_Nault How to Win the War on ..."
"Yup."
Max Marvel Finding My Inner Calamity Jane
"I an confused by the use of "aural" here: "In The Gutenberg Galaxy, he explained ..."
William G II The Gutenberg Imagination
"My friend is looking for a Pepper Smith he served in the army with, was ..."
Christine Budnack The Love Song of Pepper Smith
Browse Our Archives
get the latest from
Catholic
Sign up for our newsletter
POPULAR AT PATHEOS Catholic
1