The Bible, Science, and Higher Education 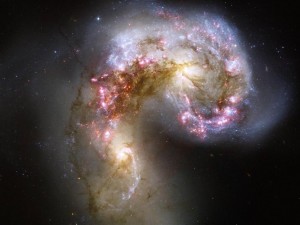 In an evening church service at Thomas Road Baptist Church in Lynchburg, Virginia, in 1979, Jerry Falwell explained the academic foundation for Liberty Baptist College (which became Liberty University in 1984). He said, “We give all kinds of academic freedom, as long as it agrees with this book.”

Picture, if you will, Falwell behind his massive pulpit, holding up a black floppy Bible. “If it doesn’t,” he said, “it isn’t academic.” He continued, “I want you having all the academic freedom you want, as long as you wind up saying that the Bible account is true and all others are not.”

In 2008, a little over a year after Falwell’s death, I was in the midst of a career change. I had a chance encounter with a dean from Liberty University who told me of an opening in their English department. The rumors around town were that things were changing, loosening up, so I sent the dean my CV.

Several days later, I spent the morning touring Liberty’s campus and talking to various members of the administration. Before lunch, my faculty escort dropped me back in the English department for a meet-and-greet. After introductions and small talk, the lone woman in the group of teachers asked if I was ready for “The Inquisition.” The other professors laughed.

“What’s The Inquisition?” I asked.

“The doctrinal,” one of the men said.

On my itinerary was a two-hour block of the afternoon devoted to the “doctrinal.”

After a pleasant lunch with the dean and a couple other men, my escort took me to the doctrinal.

Three men and one woman sat at a long brown foldout table in the Demoss Hall classroom. On the table in front of each of them was a copy of my statement of belief, required since I could not sign the Liberty University doctrinal statement.

One man took lead and told me the meeting was simply to make sure we were a good fit for one another. He introduced the questioners: he taught business, the woman psychology, one man was from the seminary, and another taught biology.

The seminary professor started the questioning, asked me if a Muslim goes to heaven when he dies. I said I was not qualified to say what the afterlife might be like for a Muslim. He scowled and wrote.

“How old is the earth?” the biology professor asked me.

I said I was an English teacher and was happy to defer to geologists on that question.

I again played the geologist card. I wanted a full-time teaching gig.

The psychologist asked about the circumstances surrounding my divorce, my present relationship with my ex-wife, and the chances for reconciliation. The man in charge asked me how I planned to “incorporate a Christian worldview” into my teaching. The man from the seminary grilled me at length on eschatology. The biology professor asked me if I thought it was immoral to kill a baboon so a child could have its heart.

The Inquisition went on like this for the entire two hours.

I arrived at the dean’s office to find a stack of books and sample syllabi waiting for me. He discussed the job, quoted a salary, and asked if I would accept it. I did. He welcomed me and told me to show up the following Monday for new faculty orientation.

The next day, the dean called and said he had jumped the gun and had to withdraw the offer. No one had asked me about pedagogy beyond the Christian worldview question in the doctrinal, or about teaching English specifically. No one observed me teach a class (to be fair, it was summer). I had failed the doctrinal, and the committee had torpedoed my employment.

It was not Liberty University but Wheaton that Peter Conn criticized in his 2014 Chronicle of Higher Education essay “The Great Accreditation Farce.” He makes the argument that Evangelical colleges should not be granted accreditation. He writes:

“Skeptical and unfettered inquiry is the hallmark of American teaching and research. However, such inquiry cannot flourish—in many cases, cannot even survive—inside institutions that erect religious tests for truth.”

Conn writes that Wheaton cannot ever teach students to be disinterested observers, willing to follow unrestrained where their studies take them. As Bertrand Russell writes in his criticism of Thomas Aquinas:

“He is not engaged in an inquiry, the result of which it is impossible to know in advance. Before he begins…he already knows the truth…. The finding of arguments for a conclusion given in advance is not philosophy, but special pleading.”

The counterargument I see most often is that “secular humanism” is a religion as well—the religion of public universities (their claim to be “nonsectarian and nonpartisan” notwithstanding), and this is just as much the enemy of unfettered inquiry.

Robert P. George makes this claim in his book Conscience and Its Enemies: Confronting the Dogmas of Liberal Secularism. He writes: “We begin to understand the much misunderstood and abused concept of academic freedom when we consider the central importance of the interrogative attitude” which “will flourish only under conditions of freedom.”

George holds out for “freedom” because it “is as necessary to the intellectual life of man as oxygen is to his bodily life.” He is quick to qualify however that “the legitimate scope of expression is obviously narrower in institutions that are founded on particular religious and moral principles.”

If, when those like George call secularism a religion, they mean by religion a paradigm for making sense of the world, they are correct. If, when they claim secularism is hostile to their worldview, they mean the consensus in the academic and scientific community is that events in history and science happen without supernatural intervention, they are largely correct there as well.

If Conn is impugning all religious institutions, he is wrong. The problem is not with faith, but with a biblical literalism that insists one particular reading of the Bible is the absolute authority by which all knowledge—scientific, academic, or otherwise—must be judged.

As astrophysicist Marcelo Gleiser reminds us, “when you adopt the idea that there is only one way of knowing a thing, then you are robbing humanity of its value.”

Vic Sizemore is a former regular contributor to “Good Letters.” He earned his MFA in fiction from Seattle Pacific University in 2009. His short stories and novel excerpts have been widely published in literary journals. His fiction has won the New Millennium Writings Award for Fiction, and been nominated for Best American Nonrequired Reading and a Pushcart Prize. You can find Vic at http://vicsizemore.wordpress.com/.

Photograph above by Temari, used under a Creative Commons license.