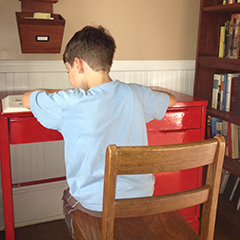 Seven-year old Isaiah found a small desk in the back of our garage and claimed it. “I want to paint it red,” he said. So we prepped it with a hand-sander, and I bought him a can of paint. Familiar with Tom Sawyer and being no fool, he recruited two of his brothers. Determined to let this be Isaiah’s project, I left them to their labor. Soon the desk was drying in the sun, and I was preoccupied with cleaning brushes along with whatever boy flesh I could lay hold of long enough to scrub it with mineral spirits.

Isaiah returned to the scene of the crime to survey his work. It was a damned atrocity. Paint ran haphazardly against the grain, tacky pools of it collected on the surface, and thick rivulets had crawled down the sides and hardened.

“Look at it,” the boy said, his arms spread wide. “It’s beautiful!”

Two days later I sat in my car beside a lovely city park and vomited. I texted my wife: “I think I just had a panic attack.”

I don’t think I had a legitimate reason to panic. I wasn’t being attacked by a bear, after all. But there was the feeling of panic, and there was definitely the vomit, and so there I was.

Oh God, I thought, I’m becoming one of those people. I don’t have a clear picture, mind you, of who those people are, beyond an impression of sensitive first-world souls who need yoga and medication to endure problems three-quarters of humanity would kill for.

Then again, I’d self-medicated with sex and booze for years, so maybe I have always been one of those people.

When I first courted her, Maggie lived in another state. When I visited, I stayed in her parents’ home, where she and they gave me sanctuary from my life’s wreckage. It was peaceful, and they were gentle-hearted, and I got sick every time.

Within a day I would experience shoulder-stooping fatigue, often accompanied by fever. Maggie would rub my shoulders, and her mother would make vegetable broth for me, and I would sleep ten hours a night. “Your body knows that you can rest here,” Maggie said. “That it’s okay to be sick.”

Maybe believing it’s okay to be sick is the first step toward healing. I may not be smart enough to understand how settling into an unexpected peace can evoke sickness, but even a fool knows that when a woman pours out that kind of love on his sorry carcass he’d best marry her quick and not look back.

Which I did. We’ve struggled through a pile of trouble to get to where we are, which is immeasurably better than any place I’ve ever been.

Yet there was that bag of vomit between my feet. My inner psychiatrist encouraged me to compile a list of my stressors. I wrote them in a work notebook and quickly realized I needed more than one page. None of them by itself was overly taxing, but there were plenty of them.

Welcome to life, pal. This is what goes through my mind when some whiner starts in about his troubles. Spend some time in a pediatric cancer ward and then talk to me about suffering.

You’d think at least the scrap of wisdom that emerged from my daughter’s terminal illness would be perspective. Yes, projects have piled up, and we need to sell our house, and find one, and help the boys make their way, and navigate an overtaxed calendar, blah, blah, blah, but my wife and babies are healthy.

What happens when they’re not?

That’s the crux of it, the single settling point for the myriad worries scrawled on this list I’m clutching. Any one of these tasks and irritants could go sideways, bringing real trouble. That’s what I’ve begun to see when I survey my calendar and to-do list: trouble in the making. So I scramble through each day, and in my heart I’m not building a cathedral, I’m piling sandbags on a floodwall.

I suppose I’m not the only one overcome by that feeling. Wiser people embrace that weakness. They let themselves be sick in order to be healed. But not me. I don’t puke in the face of trouble, not after the storms I’ve weathered. I am a rock.

Which is a silly thought, because a rock doesn’t get hit by a wave and spend the rest of its life worrying when the next is coming. A rock receives sun and wave alike, and is shaped by them, sometimes into a gorgeous pillar, sometimes into sand—it’s not up to the rock to say which.

I threw away my vomit bag and went to visit my grandmother, who’s in the ICU. You want to talk about trouble? That woman’s seen her share. I fed her chicken broth and later while she slept I prayed over her. And my stomach was fine.

I’ve made the wrong list. Instead I should name that appalling red desk, and the beaming face of the boy who loves it, and his brothers who refrain from telling him how it really looks, and my grandmother stubborn in the face of death, and every other scrap of sun warming my shoulders receive amidst the waves.

I suppose each of us must choose which list to cradle in our hands and read as a litany every day, every day, until we have no more voice with which to protest or praise.

May 26, 2015 Self-Hating Jew: A Love Story, Part 1
Recent Comments
0 | Leave a Comment
""It doesn’t matter when you start the Sinatra Christmas playlist or put up your tree. ..."
C_Alan_Nault How to Win the War on ..."
"Yup."
Max Marvel Finding My Inner Calamity Jane
"I an confused by the use of "aural" here: "In The Gutenberg Galaxy, he explained ..."
William G II The Gutenberg Imagination
"My friend is looking for a Pepper Smith he served in the army with, was ..."
Christine Budnack The Love Song of Pepper Smith
Browse Our Archives
get the latest from
Catholic
Sign up for our newsletter
POPULAR AT PATHEOS Catholic
1

A Heart of Stone
There was a stone in my pocket. I kept forgetting it...
view all Catholic blogs
What Are Your Thoughts?leave a comment
Copyright 2008-2021, Patheos. All rights reserved.
error: Content is protected !!