The Confessions of X: An Interview with Suzanne M. Wolfe, Part 1 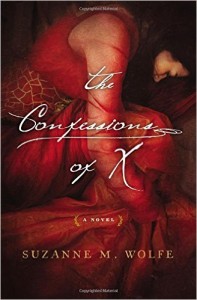 GW: So I guess doing this interview with you is a case of raw nepotism. You OK with that?

GW: Your second novel, The Confessions of X, has just been published. What is it about?

SMW: It’s the story of St. Augustine’s concubine told in her own voice—her “Confessions,” if you will. She is a shadowy figure in Augustine’s Confessions. He simply refers to her as “Una”—the One. The first chapter begins with her as an old woman waiting in the courtyard outside the room in which Augustine is dying in the city of Hippo Regius. As she waits for night to fall, she recounts the story of her life and how she came to meet Augustine in Carthage, became his concubine, and bore him a son. And what happens to her after he famously casts her off.

GW: Why did you decide to write her story?

SMW: In religion class at my convent school when I was twelve, I raised my hand and asked who this mysterious woman was in Augustine’s Confessions. Sister Bernadette replied: “No one knows. She is lost to history.” That phrase “lost to history” stayed with me. I thought of all the great women in history whose lives have been eclipsed by the men they loved. Forty years later, I decided to go looking for the concubine so she could tell her story.

GW: We use the term “concubine” rather loosely, I believe. You’ve said that “common law wife” would be a more accurate term. Could you explain a bit about that, since it affects how people understand this story?

SMW: To our contemporary ears “concubine” sounds synonymous with “mistress” or even “prostitute.” In the ancient world this wasn’t the case. The reason I liken a concubine to a common-law wife is that concubinage involved a monogamous sexual relationship when the man and woman were not, or could not be, married for societal reasons.

This was almost always due to a man of higher social status falling in love with a woman of low social status. One of the most famous examples is Caelis, the freedwoman and concubine of the Emperor Vespasian. Frequently, concubinage was voluntary on the part of the woman and her family as it involved a means by which she could attain economic security. To be labeled a concubine was not a derogatory term in the ancient world and was often inscribed on tombstones to denote the status of the deceased.

GW: Augustine has the reputation of being sexually promiscuous—in part, because of his own language condemning his sins—but he was faithful to the concubine, wasn’t he?

SMW: Yes, he was faithful to the concubine all the years they were together. After she was sent away, he had a brief fling with his housekeeper. I think that he was so ashamed about this “affair” that he castigates himself too harshly about it in the Confessions, hence the lasting impression in history that he was promiscuous. By today’s standards, and perhaps any age’s, he was a model of chastity.

GW: Augustine never names her in his own Confessions, even though he names all the other principals in his life. So she remains nameless, and you’ve stayed true to that by never giving her name in the book (hence “X”)…

SMW: At first, I was mad at Augustine for not naming her. I thought that it suggested that he was ashamed of his relationship with her. But the great biographer, Peter Brown, believes that she may have been living at the time the Confessions was published and Augustine was trying to preserve her anonymity. I agree.

It is clear that Augustine loved her passionately. In the Confessions he says: “The woman with whom I had been living was torn from my side as an obstacle to my marriage and this blow crushed my heart to bleeding because I loved her dearly.”

In the earlier drafts of the novel, I named her at the very end. But then it occurred to me that the voice that emerges in the novel is so singular, so vibrantly alive, that it is this that gives her a more lasting and unique identity and that her name was no longer so important.

GW: In the novel, X is the daughter of a mosaicist or a mosaic artist—or whatever the term is. Why did that appeal to you?

SMW: At some point in the narrative, X’s father describes his craft as “the art of broken things.” The creation of a mosaic from tesserae is a wonderful metaphor for the memoir—the careful selection of particular memories to make a retrospective narrative of X’s life from childhood to old age. She is, in so many ways, her father’s daughter—she builds up a compelling picture of her life and the ancient world of Carthage, Rome, and Milan for the reader. And her life is tragic but she takes these broken pieces and makes a beautiful whole out of them.

GW: Augustine and X were very young when they entered into their relationship. I suppose part of the poignancy of the story for both of them is that they couldn’t foresee what was to come, right?

SMW: Absolutely. We know Augustine was seventeen when he met X in Carthage. She was probably younger by a year or two. So they were both only teenagers, for heaven’s sake. And we know how reckless and passionate teenagers are [here Suzanne and Greg, parents of four adult children, exchange small, slightly weary smiles].

In addition, Augustine belonged to a Gnostic sect, the Manichees, so nothing indicated that he would one day convert to Catholicism, that he would become a priest and bishop. The sad thing is that, even if he had not converted, Augustine would not have been able to rise in his profession as rhetor and, later, as orator to the imperial court in Milan, unless he made an advantageous marriage to a woman of his own social rank. In hindsight, one could perhaps predict that they would have been parted by events, but what young love can look that far into the future?

Suzanne M. Wolfe grew up in Manchester, England, and read English Literature at Oxford University, where she co-founded the Oxford C.S. Lewis Society. She is Writer in Residence at Seattle Pacific University and has taught literature and creative writing there since 2000. Wolfe is the author of Unveiling: A Novel (Paraclete Press, 2004) and co-founder, along with her husband, of Image, a journal of the arts and faith.  Suzanne and Greg have also co-authored many books on literature and prayer and are the parents of four grown children. They live outside of Seattle.

January 29, 2016 The Confessions of X: An Interview with Suzanne M. Wolfe, Part 2
Recent Comments
0 | Leave a Comment
Browse Our Archives
get the latest from
Catholic
Sign up for our newsletter
POPULAR AT PATHEOS Catholic
1