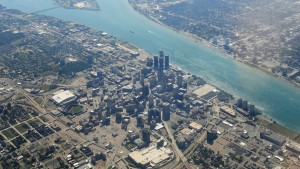 Detroit is the only major city in America, people will tell you (even if you haven’t asked), where you drive south to get to Canada. The southerly orientation of our otherwise-northern neighbor is due to an odd strip of Canada that squeezes in between Lake Huron and Lake Erie. That strip extends all the way to the outskirts of the Motor City. There, just across the Detroit River, is the city of Windsor, which is located in Ontario, which is a province of Canada.

You can stand at the bottom end of Belle Isle—a Detroit city park on a small island connected to the rest of the city by a bridge—and observe, if you are so inclined, the goings-on in Canada just a stone’s throw away. (You are not encouraged, however, actually to throw stones.) That man jogging along the path just across the water there? He’s a Canadian.

Why is it so striking, this Canadian proximity? One answer is that we’re in Detroit, and Detroit, more even than other American cities, seems to be so very much an American city. Perhaps this is because of Motown, that most American of American Pop music. Perhaps it is because of cars, American cars: General Motors, Chrysler, Ford.

Back many years ago, being an American and owning a Ford were practically synonymous. Even Gertrude Stein owned a Ford. She named it after her Aunt Pauline.

But the fact that Detroit is, geographically speaking, practically a Canadian city is intriguing and unsettling for reasons that seem to delve deeper than Motown or cars.

After all, today, there aren’t really any cars being made in Detroit. Assembled, to some degree. But not manufactured. The manufacturing happens in China and other places far away. Somehow, though, Detroit—in all its misery and decline—still manages to project a distinctly and even aggressively American aura.

That aura has taken on a life of its own. It has outstripped its causes, ripped out from the moorings of history, economics, politics.

This aura issues forth from the center of downtown Detroit along its spokes—the great broad avenues that radiate geometrically like a halo in a Fra Angelico painting, out past the eight-mile boundary of the city, only dissipating far, far away, somewhere out there in Michigan, where the influence of the city finally fades into farmland, forest, rurality and river.

Even fifty miles past Detroit to the north or west or east you can still feel and smell the city—figuratively and, on some days, literally. But not to the south. The city does not travel that way.

The Detroit aura can’t penetrate Windsor. Even in earlier decades when Detroit was confident in its triumphs, before it had fallen into its present semi-convalescent state, the city turned its back on Canada, ignoring her and thereby acknowledging, if grudgingly, that America’s powers were neutralized by the international border that floats invisibly out there somewhere in the middle of the Detroit River.

Out in that river, deep in the water, is a border that divides two very different modes of being. Making a right-hand turn on Jefferson Avenue, and you enter a tunnel that moves through the river and on to Windsor. You emerge from that tunnel into grayness and a light drizzle that bounces raindrops off the pavement in Windsor just as it’s doing in Detroit.

It is the same. Yet it is not the same. The rain in Detroit, if you were to cross back over the river, carries with it the scent, the suggestion, of menace.

That menace—from where does it come? It is born, no doubt, of desire and frustration and long-lingering resentments, the initial causes of which are buried so deep they can hardly be articulated. When it rains in Detroit, the city soaks up the moisture, and soaking, produces a kind of steam, an effervescence that cannot be detected by meteorological devices or any other sort of scientific instrument.

The steamy effervescence is, nonetheless, undeniably and irreducibly real, comforting, cloying, and dangerous all at the same time.

The rain in Windsor does not have that same effervescence. For all the wetness, the rain in Windsor is a dry substance. The long smear of gray across the sky above Windsor muffles the city and is silent. The atmospheric event creates no atmosphere. It doesn’t Sturm in Windsor; it doesn’t Drang. Perhaps the laconic dryness of Windsor plays some secret metaphysical role in Detroit’s being Detroit, and vice versa.

Gazing out at the Detroit River and the odd, invisible boundary between modes of being that can be found there, a passage from Proverbs drifts to mind. The passage contains a strange bit of advice, counterintuitive and, seemingly, in complete contradiction with the advice found elsewhere in the Bible about being straightforward and transparent.

The passage (Proverbs 11:13 KJV) goes like this: “A talebearer revealeth secrets: but he that is of a faithful spirit concealeth the matter.” There is a surface meaning to this parcel of wisdom, no doubt. Don’t be a gossip. Don’t spread rumors.

But there is another meaning, harder to define. It is about the value of concealment in itself. It is about the necessity of secrets to the structure of reality. That’s to say, there must be secrets. The content of the secrets doesn’t even matter so much. Just that they be.

There is revealing and there is concealing. And there shall be no revealing without an attendant concealing, which is exactly how it feels today on the empty roads outside of Windsor, the clouds hanging low over a giant, stretched-out horizon that wanders north as far as the eye can see, and is notable, if nothing else, for its calm indifference to the ebbing and flowing of the worldly fortunes of Detroit.

Image produced above is by Barbara Eckstein, licensed by Creative Commons.

May 5, 2016 The Lone Ranger’s Easter Narrative
Recent Comments
0 | Leave a Comment
Browse Our Archives
get the latest from
Catholic
Sign up for our newsletter
POPULAR AT PATHEOS Catholic
1

Hearing God a Second Time
Have you ever worried that you missed what God had planned for...
view all Catholic blogs
What Are Your Thoughts?leave a comment
Copyright 2008-2020, Patheos. All rights reserved.