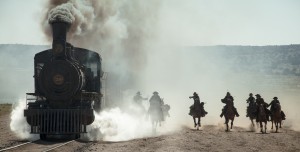 His back to us and to the camera, the hero walks silently away. His work in this particular community is done. He has restored the community to its better self.

This is the closing image of the classic 1947 film The Bishop’s Wife, which I watched recently. Cary Grant as the angel Dudley—sent to guide the bishop away from his egotistical ways and back into the arms of his neglected wife—has effected this conversion not only in the bishop but in other characters as well.

And as I watched Dudley walk away from us and from the community where he has intervened for the good, I suddenly thought: I’ve seen this scene before. My husband and I are on a kick of viewing 1940s and 1950s Westerns, which often end this way (though the departing hero might be on horseback rather than walking).

“Shane! Come back!” is the famous plea at the very end of Shane (1953). It’s much the same as the legendary ending of John Ford’s The Searchers (1956), with the John Wayne character—having rescued the young girl who’d been kidnapped by Indians and returned her to her family—walking slowly away from us and from the family, into the wilderness.

Then there’s The Lone Ranger TV series of 1949-1957, which my husband and I are also watching. (Don’t worry: we’re not bingeing. We restrict ourselves to one episode per evening.) Each episode ends identically: the Lone Ranger has restored justice to the frontier town that had been overtaken by outlaws. As the key “good” characters chat in smiling relief, Tonto and the Lone Ranger slip silently away from us and from the town. The final shot is of them riding off into the distance.

It might seem odd to place The Lone Ranger in the same category as the The Bishop’s Wife. Dudley effects an inner conversion on the characters who had gone astray. The Lone Ranger, while occasionally moving a “bad guy,” or a conflicted guy, to inner conversion, is most often restoring the externals of justice: the bad guys end up behind bars.

Still, there’s a deus ex machina methodology in both cases (literally in Dudley’s case, since he’s an angel sent from above to do his job).

Now you’re probably wondering why I’m devoting so much time to these “good conquers evil” tales. I’m wondering, too. Part of the fun of watching The Lone Ranger is simply its silliness: it’s my half-hour escape at the end of each day. But there’s something more about all these 1940s-1950s Westerns, and about The Bishop’s Wife too. They’re all, I’d say, art shaping itself to a very human longing: the longing for a restoration where evil is indeed conquered by good.

It’s no accident that this is the Christian narrative as well, which we celebrate especially at Easter.

The tough facts of our real human lives—as individuals and as communities, whether local or global—are of course messy, complex, a tangle of good and bad motivations and actions. But I don’t think this makes the “triumph of good” stories mere fantasy. They represent our deepest desire: we ache for the good in ourselves and in our world to win out.

When I get snippety with my husband, I ache for this evil habit to be transformed by my better self. When terrorists bomb yet another target, we ache for the Lone Ranger to come and wipe them all out in a half hour.

I don’t want to get too heavy here. The Bishop’s Wife is a delightful comedy. The Westerns I’ve been talking about aren’t meant to be deep. But the light, and even sometimes frivolous, entertainment that these films offer connects by a sort of Wi-Fi to a need at our core.

That’s why they’ve become classics. Initially, the Western cowboy genre as it developed in the 1940s and 1950s might have been expressing the post-war triumphant relief of the U.S. and its allies at having defeated the definitely evil Nazis. But that historical context has faded, while these films have held up now for sixty to seventy years.

Finally, I want to return to the image I began with, the image that closes these films. Why, I’m wondering, must the figure who has brought about good then slip silently away? I think maybe it’s because he can’t have an ego.

“This mask stands for justice,” the Lone Ranger says in nearly every episode. Justice must get our final attention, not its human (or in Dudley’s case, angelic) agent.

And yet it’s not only that he can’t have an ego. Leaving aside the Lone Ranger, whom we never get inside of at all (he’s wonderfully, consistently superficial), these other heroic figures have made some sort of personal sacrifice in the course of bringing restoration to the community. As they walk away, solitary, they’re aware of what they’ve chosen to give up in order to effect the good of others.

Image above is reproduced by the U.S. Departure of Agriculture, licensed by Creative Commons.

May 5, 2016 Evil’s Share
Recent Comments
0 | Leave a Comment
""It doesn’t matter when you start the Sinatra Christmas playlist or put up your tree. ..."
C_Alan_Nault How to Win the War on ..."
"Yup."
Max Marvel Finding My Inner Calamity Jane
"I an confused by the use of "aural" here: "In The Gutenberg Galaxy, he explained ..."
William G II The Gutenberg Imagination
"My friend is looking for a Pepper Smith he served in the army with, was ..."
Christine Budnack The Love Song of Pepper Smith
Browse Our Archives
get the latest from
Catholic
Sign up for our newsletter
POPULAR AT PATHEOS Catholic
1