The Day My Daughter Found Herself

The Day My Daughter Found Herself October 6, 2016 Tania Runyan 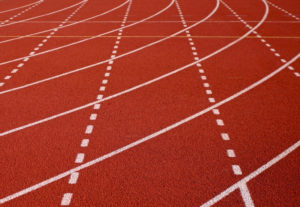 I want you to watch me run.

My daughter Becca sent me that text last Friday morning, just a couple hours into her first “24-Hour Challenge.” For weeks she’d been anticipating the annual event at her middle school, during which students run ten miles in half-mile installments around the track, breaking to sleep (or at least pretend to) in tents overnight before finishing in the morning. A major community event, the fields come alive with loud music, tents decked out with posters and lights, colorful signed shirts, and best friends walking arm in arm as they warm-up every forty minutes to run.

Mom. She texted me again. Are you coming soon?

I’d just come off of two sleepless nights, once again beset by conflict created by my own lack of interpersonal discernment. Questions wrestled in my gut: How do I help people mend their destructive lives without destroying my own? Is it possible to love wholly and purely without risking pain? I started to think I’m not cut out for fellowship. Maybe I need to stay away from everyone, I thought, except for my own family.

Indeed, my husband had brought me flowers that week, and I didn’t want to let them out of my sight. I carried the orange, yellow, and purple mums and roses from room to room like talismans. I had no appetite but kept sniffing the flowers, inhaling molecules of petals, breathing particles of sun to survive.

Can I come watch you when I bring you your lunch? I responded to my daughter. I had just left a therapy session and sat in a parking lot, drinking an Americano and watching the September light try to push itself through the ragged clouds.

So I drove to the school, passing the simmering goldenrod of unincorporated fields. As I pulled into the lot, I felt that familiar intimidation as other moms, women with professionally highlighted hair who seemed always in tune with their children, pulled wagons laden with home-cooked brunches to their sweaty offspring. As I walked onto the field by myself, I felt the terror of that wide-open social space. Can I trust anyone again?

As soon as Becca saw me, she jumped and waved.

“I’ve won every run!” she shouted, then did a little Egyptian dance. “I’m beating everyone!”

She popped her earbuds in and skipped to the start, where several dozen other sixth-graders lined up for the next heat.

It would be her eleventh half-mile around the track. Instantly, her long, lean legs propelled her to the front of the pack of boys and girls. Her face remained relaxed and serene as her body tilted slightly around the curves. On this overcast day, her two French braids emitted their own copper light, which I followed until she finished her first lap and high-fived me, smiling into the sky.

Becca would stay up front until the end of the race. She would do this every time, until once, concerned a classmate was gaining on her, she slipped and fell. After a couple sore half-miles, Band-Aids on her knee and hip, she came in first again. And again and again. Teachers talked. Parents pointed out her form. The track coach approach her, told her he expected to see her in the spring.

When I was young, I discovered I wanted to be a writer in relative isolation.  My babysitter had introduced me to writing stories, but she couldn’t see my spirit bounding around the track inside me, my pigtails bouncing. In fact, I wrote stories by and for myself for years until a seventh-grade teacher read them aloud and I began to relish writing as a spectator sport.

But when I saw Becca run, I witnessed the day, the actual moments of her self-unfurling, an electricity I hadn’t seen in her dance recitals, paintings, or soccer games. The gift was almost too beautiful to bear, my problems crumbling under the swift footprints of a surprise star in clearance Payless shoes.

I am not living through my child. I am trying to live better because of her.

“It’s time to talk about boundaries,” the therapist had mentioned, to figure out a way to love suffering people, an apparent hobby of mine, without getting mired in their pain. While dealing with difficult people that week, people who had thrown me under their dilapidated buses and moved on, I had missed some of Becca’s excitement. While she circled around the house, counting the days until the 24-Hour Challenge, I had chatted on the phone and computer for hours, hidden my face in the flowers while trying to process my grief.

Of course hard things happen, and my kids need to see me deal with those events. But I also want to live within boundary lines that fall in pleasant places, as the psalmist says, kindly fencing off people who are not in my power to change and opening the gates for the ones I know are entrusted to me.

I want to be a boundary, a track in my daughter’s life. Not a helicopter that chops above her head, but an ever-expanding circle that allows her to run harder, faster, slower, backwards—whatever she needs to grow into herself—while still holding her safely inside. She won’t always see me, but I’ll keep her gently bound with new shoes and energizing food and loving encouragement as I watch her break records from afar.

On Saturday, when the 24-Hour Challenge came to an end, Becca limped through the field as my husband and I carried her duffel and tent. “I can barely walk,” she moaned, and spent the rest of the day in bed.

I took a walk myself, toeing the bright lines of honey locust leaves that gathered at the edge of the sidewalk like the strands of Becca’s hair sticking in every brush in the house. They followed me like the flowers. The wind picked them up from time to time, blowing them around my arms and face, and, eventually, away.

The above image is by Dean Hochman, used by permission of a Creative Commons license.

October 7, 2016 Poetry Friday: “Intercession: For My Daughter” by Brett Foster
Recent Comments
0 | Leave a Comment
""It doesn’t matter when you start the Sinatra Christmas playlist or put up your tree. ..."
C_Alan_Nault How to Win the War on ..."
"Yup."
Max Marvel Finding My Inner Calamity Jane
"I an confused by the use of "aural" here: "In The Gutenberg Galaxy, he explained ..."
William G II The Gutenberg Imagination
"My friend is looking for a Pepper Smith he served in the army with, was ..."
Christine Budnack The Love Song of Pepper Smith
Browse Our Archives
get the latest from
Catholic
Sign up for our newsletter
POPULAR AT PATHEOS Catholic
1