Painting Brings the Ancestors Around 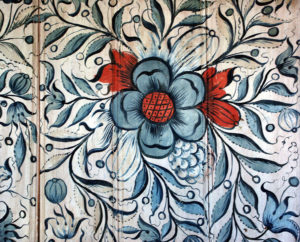 On a November evening last year, I walked to my rosemaling class and sat around a table of women. We represented a wide range of ages and backgrounds, but we were all raised with rosemaling—breadboards and spoons and carved horses and Välkommen plaques all made of basswood. We were all trying to invoke the people we’d lost, the people who’d taught us who we were.

Rosemaling, traditional Scandinavian folk-painting, depends heavily on brushstrokes and pattern, but it doesn’t ever feel right, doesn’t bring the spirits around, if you don’t mix the pigments just so.

Yellow ochre with enough titanium white to give it opacity. Red oxide on its own; that’s the one you don’t try to improve. Burnt sienna and titanium for a salmon pink.

And a surprise: Yellow ochre and a touch of carbon black—never yellow and blue—for a forest-floor, a ferny, mossy green.

Never blue on its own! Prussian blue and raw umber for the sea, and sometimes it makes a strange aquamarine. White always toned with yellow ochre and raw umber until it’s a jaundice that brings the composition together.

There’s alchemy to it beyond experimentation. Sometimes I have to work hard, slapping paint around with my knife, and it’s never right. Sometimes I mix up the paint fast, and there on the palette is a lost part of childhood rushing back fast.

Pigment brings the ancestors around. I get a feeling when the spirit of my great aunt is around, not a chill or a shock, just an Oh, hey. It’s usually after I’ve been mixing paint. Something there that wasn’t there before, something intrisically her. She sits at my painting table, and I can almost hear her: Yellow with a bit of black. That’s the trick, kid.

On Alla Helgons Dag (All Saints Day), I put out small cups of coffee for my great aunt and her four siblings: my grandpa, her twin sister, and the two twin boys—one dead at ninety-nine, the other gassed in a French field.

I don’t feel the others, perhaps because I was so attached to my great aunt, to the idea of her as culture-bearer, when she was alive. Visiting her apartment each time, I tried to memorize the colors of the rosemaling and think of names for each shade, realizing that the pigments were deep notes in my belly, something old and lost and clawing its way up.

Driving through the forest on I-35, watching for deer and listening to a nyckelharpa CD. The smell of birch bark and swamp rot. All these ways I try to recall myself to myself, to not let the ancestral-old parts of me fall away. Leaving her apartment each time, I memorized one line from the Desiderata hung in the entryway.

With all its sham, drudgery, and broken dreams, it is still a beautiful world. Be careful. Strive to be happy.

I don’t believe in a veil between worlds that thins at certain times of the day or year, though I’ve seen (at the time, or only in memory?) air suffused with color, a tint to things, a shift caused by a true presence or the weight of many heavy hearts around a table smeared with the colors of our ghosts.

If there’s a veil, it’s one dividing heaven and earth in billions of sloppy temples of the Holy Spirit, a veil that tears from top to bottom over and over as if Christ can’t stop giving.

Holy of Holies, a place only God could enter to be closer to his people, or a priest on the Day of Atonement, and then only if he brought blood. The colors of the veil: tekhelet, argaman, and shani. Where are these colors now? Do they ever appear in a sudden shift in the air?

Paul said all the sacrifices stopped with Christ, though Paul said a lot of things and told people he never spoke for God. Eh, don’t listen to me, in that way that makes you want to listen just to understand what God saw in such a loudmouth. Maybe the giving never stopped and the veil just moved house.

“We have confidence to enter the Most Holy Place by the blood of Jesus, by a new and living way opened for us through the curtain, that is, his body,” wrote Paul to the Hebrews.

One of my first memories is five of my ancestors hanging out with me as I lay in bed, listening to my parents and their friends speak downstairs. That sacred space when a child ought to be sleeping and the house is wide-awake and apart from her. Five years old; I didn’t know their names then. Wilhelmina with the burned hands because she caught a coal-burning stove about to fall on my baby great aunt and didn’t let go until she’d pushed it back into place.

And I don’t remember anything other than their presence—no words, expressions, no purpose for being there—and the air that was all life-soaked red: carmine, sanguine, cochineal, incarnadine, shani.

In class, I grab sienna instead of umber, always mistaking the two because of their shared raw and burnt descriptors. I want to make earth and instead make flesh, the color exactly recalling each page of my book of dissected cadavers from grad school. Desanguinated, we lose the ability to look hurt and thus to look human.

But this toned pink is beautiful on the palette, and it feels familiar. It’s a barely-there hint that a grey sky is just about to snow, and it might become something like memory if I let it. I forget about painting earth and change my composition a little to apply the flesh.

Above image by Frode Inge Helland, used with permission under a Creative Commons License. 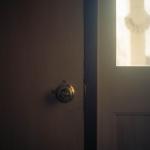 September 25, 2017
Questions for the One Who Waits
Next Post 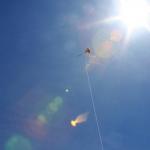 September 27, 2017 My Kite Boy
Recent Comments
0 | Leave a Comment
Browse Our Archives
get the latest from
Catholic
Sign up for our newsletter
POPULAR AT PATHEOS Catholic
1 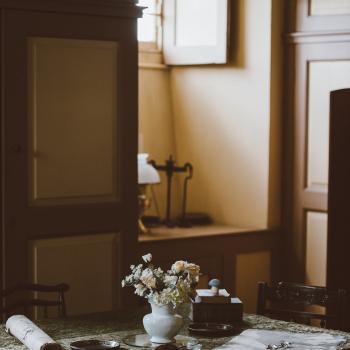 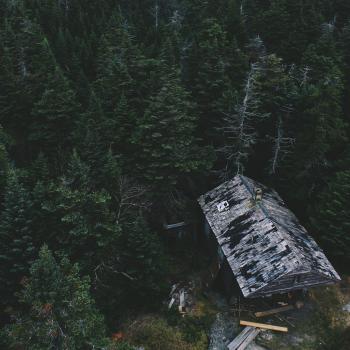 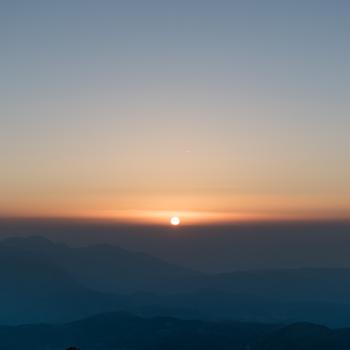