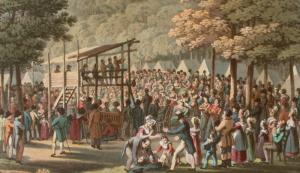 We’re familiar with the genre called “historical fiction.” But in “Camp Meeting: Old Saybrook, Connecticut, April 1827,” Marilyn Nelson has created what we could call “historical poetry.” She invents a narrator who attended this mammoth camp meeting with her evidently upper class girlfriends, and describes the meeting through the narrator’s eyes. The narrator is a bit scornful of the crowd “swarm[ing] like ants taking breadcrumbs home.” She notices, without emotion, people inside the tents “their hands in the air, / or swaying side by side, almost dancing.” What really moves her is when “that handsome Oliver Ingraham / (he’s in his last year at Yale)” smiles at her. “Oh, it was thrilling!” she exclaims, finding her excitement in the smile of this boy rather than in the preachers’ exhortations “to find Jesus / and to serve him by serving each other.” But there’s a twist in the poem’s final sentence. Surprising even herself, while leaving to catch the ferry back home” I couldn’t stop  longing to love my neighbor as myself.”

took the ferry to the big camp meeting
in Old Saybrook, where ten famous preachers
took turns exhorting us to find Jesus
and to serve him by serving each other.
The crowd swarmed like ants taking breadcrumbs home.
Wealthy Ann said smelling all those people
made her dizzy. But Ruhama and I
suggested her corset was laced too tight.
I didn’t count the big tents they’d set up,
but walking between them you could hear shrieks
pleading for mercy and offering thanks,
and people clapping their hands and singing,
preachers asking if you’re washed in His blood
and telling you that we must free the slaves
and feed the hungry and proclaim good news.
You’d glimpse people with their hands in the air,
or swaying side by side, almost dancing.
People more like us, and common people,
people who work for you, and sell you things:
sea captains’ wives and freedmen surrendered
to the ecstatic profession of faith.

We bought squares of a delicious corn-cake
from a baker with a basket of them,
who blessed us as we pressed coins in her palm.
And that handsome Oliver Ingraham
(he’s in his last year at Yale) smiled at me.
Oh, it was thrilling! But we had to leave
early, to catch the ferry back to Lyme.
Wealthy Ann, Othelia, and Harriet
giggled almost the whole way to the dock.
Hipsey was pensive. And I couldn’t stop
longing to love my neighbor as myself. 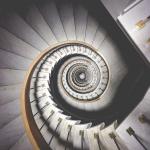 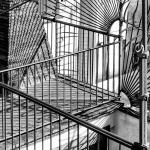 November 13, 2017 Letter from an Underground Karamazov to His Couple’s Therapist
Recent Comments
0 | Leave a Comment
""It doesn’t matter when you start the Sinatra Christmas playlist or put up your tree. ..."
C_Alan_Nault How to Win the War on ..."
"Yup."
Max Marvel Finding My Inner Calamity Jane
"I an confused by the use of "aural" here: "In The Gutenberg Galaxy, he explained ..."
William G II The Gutenberg Imagination
"My friend is looking for a Pepper Smith he served in the army with, was ..."
Christine Budnack The Love Song of Pepper Smith
Browse Our Archives
Follow Us!