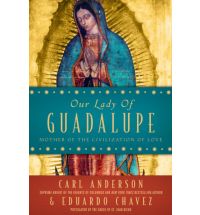 Our Lady of Guadalupe: Mother of the Civilization of Love by Carl Anderson (Author), Eduardo Chavez

Although I usually pay scant attention to Marian apparitions, ever since I first was exposed to the importance of the symbolism in the image of Our Lady of Guadalupe, I have been interested in her. Briefly, as In Conversation With God (Vol 7: Feast Days, July-December) sums up: The Blessed Virgin Mary appeared to Juan Diego on Tepayac hill near Mexico City on the 9th of December 1531 to ask for the construction of a church there in her honour. After the miraculous cure of his uncle, Bernardo, this Indian peasant brought to his Bishop some roses that he received from Our Lady as a sign of her request. As the flowers fell from his cloak to the ground before the astonished Prelate, the image of the blessed virgin, which is venerated in the Basilica of Guadalupe to this day, was miraculously impressed on the simple garment before their eyes.

For more about the well known aspects of how the symbolism would have spoken to Juan Diego and the Indians, see this post.

However, for the full scoop, you really must read this fascinating book which I was lucky enough to receive thanks to Random House. This book helped me see not only how well Our Lady spoke to the Indians in the past but also how she continues to carry a message of love, unity and hope for us today. Authors Carl Anderson, chief executive officer and chairman of the board of the Knights of Columbus, and Father Eduardo Chavez, one of the most renowned experts on the Guadalupe apparitions, trace the history of the apparition and explore her as an important catalyst for modern religious and cultural transformation.

What has impressed me most is how completely every bit of symbolism was tailored to speak to the Indians of the time. Here is an example.

After introducing herself, the Virgin revealed the reason for her appearance:

The Virgin then explained to Juan Diego how she needed him to deliver her message to Friar Juan de Zumarraga, the head of the church in New Spain.

Within the context of European Catholicism, the first apparition makes poignantly clear the Virgin Mary’s universal role as mother and her desire to bring all people closer to God through her loving intercession. Less obvious, though no less significant, is what the Virgin’s request for the construction of a chapel would have meant to a learned Indian. For the Aztecs, the temple was more than a religious building and the establishment of a temple was more than a ceremonial religious occasion. So central was religion to Aztec culture that the temple was seen as the foundation of society. Historically, the construction of a new temple marked the inauguration of a new civilization. In fact, the Aztecs built the Templo Mayor in the years immediately following their migration to the Valley of Mexico, and the common Aztec glyph, or pictogram, for a conquered people was the depiction of a temple toppling over, sometimes in flames. Thus the Virgin’s commission to Juan Diego was rich in meaning far beyond the construction of a building, and was made richer still by the fact that it had been given to an Indian.

This scholarly but accessible book has so very much more fascinating information that I am going to do a series of excerpts to help give you a sense of the book. I’ll list them at the bottom of the review as they are posted. Especially interesting to those who have read much about Our Lady of Guadalupe will be the appendices which include a transcription of Juan Diego’s testimony about his encounters with Mary.

My one criticism of the book is that there isn’t a good reproduction of the image on the tilma in the book for us to use in considering all the symbolism being explained. The best image is on the cover and is mostly covered by the title and other such information. I encourage you to seek out an image to put with the book so you really appreciate the information being shared by the authors. However, that is one oversight in an otherwise excellent book. I am not quite finished but wanted to get this review out there as it is being published August 4.

December 12, 2011 In My Ears: The All Pro by Scott Sigler
Recent Comments
0 | Leave a Comment
Browse Our Archives
get the latest from
Catholic
Sign up for our newsletter
POPULAR AT PATHEOS Catholic
1