These posts are not only for us in the south though – I am sharing information for both hemispheres, about both hemispheres.  So people in the northern hemisphere will hopefully find value in these posts as well – keeping in mind these are a bit 101 so if you’re an experienced Pagan, you probably already know most of what’s here anyway.  But you might not know about all the hemisphere differences, so you may still find this  series a worthwhile read.

In last weeks post, The Moon part 1, we looked at the usual lunar phases – the main difference between the hemispheres when it comes to the phases is how the moon looks during each phase, all a matter of perspective.  Despite looking different between the hemispheres, the moon phases don’t really pose much of a problem for southern hemisphere Pagans.  A waxing moon is a waxing moon and it means much the same thing wherever you are.  However, the full moons of the year are given names within different traditions, religions and regions, mostly to do with the seasons, harvest, plant cycles and animal behaviours.  From what I can tell these names and associations are exclusively northern – there isn’t any traditional or agreed upon list for the southern hemisphere.

But people do try to come up with lists for the full moons for the southern hemisphere.  Most common to see is when the list is simply given the 180 treatment, switching things by six months.  The following table images show some of the more common names for the full moons, including ones that use the 180 switch and some that are uniquely for Australia.

These lists leave us with a few problems.  A lot of these names are just not feasible for much of the southern hemisphere – especially Australia and New Zealand.  Beaver Moon?  Wolf Moon?  These things are of no help to us whatsoever – and therein lies the problem with the 180 switch method.  Every land is different and will have different animals and plants.  Sure, we have strawberries and honey and corn – but we might do better to look at native plants and animals.  Not only this, but even those that could be called universal – snow, thunder, storms – will only work for certain areas, and not others.  Australia is not covered in snow in winter, some mountainous areas sure, but the majority of this country is snow free except on rare occasions.

Which also means the Aussie specific ideas in the above Southern Hemisphere table are also not helpful for some of us.  Some of them are nice and can be used by me, and indeed are on my quick list, but they aren’t at the right times of year.  Some of them are useless – I can’t say I have ever seen a goanna or wombat around here.  Not to say they aren’t here, but they aren’t common – else I would have seen at least one of each in the almost 20 years I have lived in this town!

This is not unique to the southern hemisphere, but is true for the northern hemisphere too.  Not all places will have snow or beavers or wolves or deer.  So if you are going to use named moons in your Paganism or Witchcraft then you would do well to look at your specific region and create your own list.

Back in 2012, Ravenari, a member of the Pagan Veil, made this observation, “Most of the Acacia locally bloom here in August – so I call that moon ‘Acacia moon’ and work primarily with yellows and flower energies and so on. It might be that you know that certain birds migrate, or trees flower, and so on – and if you don’t, it will give a chance to research the cyclical changes that occur. It can be a really fun ongoing project, and gives you an opportunity to have a closer relationship with the land at the same time.”

So there is a good starting point, look at what flowers bloom when, what birds migrate when, when do the leaves change colour or fall and which trees does this happen to most noticeably in your area? When does the frost settle in, if it does?  What about insects?  For instance the crickets go crazy in my area all through summer – I remember times walking around town and having to walk around a massive pool of them writhing and chirping and waiting to (probably not) eat me.  When does the wind blow strongest?  For me, it’s in May.

Here is an example of how I might consider developing such a list based on my own area.

January: Cricket Moon.  Because of the crickets (bug, not sport), everywhere.
February: Fire Moon.  The worst bushfires often occur during this month in my area.
March: Mantis Moon.  The Praying Mantis begins its mating season and they are everywhere during this month.
April: Death Moon or Mourning Moon.  ANZAC Day and Samhain occur in this month.
May: Windy Moon.  Pretty sure my roof almost came off.
June: Darkening Moon. The days are getting shorter as we come up to the Solstice.
July: Winter Moon.  Pretty obvious, it is midwinter after all.
August: Whale Moon.  My town is not on the coast, but we are close to a town that experiences the joy of southern right whales returning to birth and raise their young every year.
September: Spring Moon.  It is Spring.  And I couldn’t think of a better name quickly.
October: Swooping Moon.  Any Aussie would get this one.  Magpies are the bane of our Spring existence, but they are awesome and funny birds the rest of the year.
November: Callistemon Moon.  No longer the correct botanical name, but I like it more for the bottlebrush plants that bloom so well at around this time in my yard.
December: Snake Moon.  Hot days, long grass in the nearby paddocks, snakes come a slithering.  Although living in Aus, the snake moon could be all year.

This is a quick list I just came up with on the fly, using information about my local area that I just happened to have randomly noticed without giving it much attention.  I had trouble with a couple of the months, obviously with such names as Spring Moon and Darkening Moon – this is mostly because last years spring was very odd, it started in August and that is not typical so I do not trust my observations for much of last year. But for the most part it wasn’t too hard to remember some basic monthly associations.  Actively paying attention to the world around you would give a lot more information to work with in formulating your own location specific moon names and correspondences. 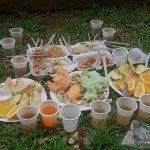 June 9, 2016 Who Do You Really Want In Your Bathroom
Browse Our Archives
Follow Us!

Flowers of the Dead
“From my rotting body flowers shall grow, and I am in them...
view all Pagan blogs
Copyright 2008-2020, Patheos. All rights reserved.