These posts are not only for us in the south though – I am sharing information for both hemispheres, about both hemispheres.  So people in the northern hemisphere will hopefully find value in these posts as well – keeping mind these are a bit 101 so if you’re an experienced Pagan, you probably already know most of what’s here anyway.  But you might not know about all the hemisphere differences, so you may still find this  series a worthwhile read.

The two pictures below will show the difference in our views, each picture shows new to waxing to full to waning to dark, from left to right. So the first moon shown in each picture is actually the exact same moon phase, at the same time, just seen from the two different angles.

In astronomy the New Moon is when the moon is between the sun and the Earth, the suns light shines on the side of the moon facing away from us and as such the moon cannot be seen properly from the Earth.  It is basically invisible.

In Paganism however the New Moon is generally just after this darkness, when the sun shines on a small piece of the moon which reflects back to us here and we can see a tiny sliver of the moon.

Correspondences, the Waxing Moon is the time of growth, the moon is increasing in power with each passing night.  This a great time for construction, for strengthening already existing things, whether that be material objects, relationships, long-term spells and rituals, or even your business.

In astronomy and Paganism the Full Moon occurs when the earth is between the moon and sun.  The sun is able to shine on the side of the moon that faces us and so we can see the entire “circle” shape brightly lit in our sky.  The date here is the same for astronomy and Paganism, though of course different for each month.  Most will attribute three days to the full moon, its actual date and the night before and after. Pagans and Witches may celebrate the Esbat on the full moon, which can be done with a group or coven or solitary.

Correspondences, the Full Moon is considered by some to be the most powerful of the lunar phases and any magic, spells or rituals performed will be amplified by this strength.  Anything done of a psychic nature is best preformed during the full moon, so divination, dream work, prophecy.  The moon is in its phase as the Mother Goddess, full of power.

In astronomy and Paganism the Waning Moon happens in the long period between the Full and Dark Moons.  It, like the Waxing Moon, will go through its own phases within astronomy and some Pagan traditions.  Waning Gibbous, Last Quarter and Waning Crescent.

Correspondences, the Waning Moon is when the moons power is being drawn slowly inwards, making it the best time for banishment or letting go of things, whether physical or mental, losing weight or ridding yourself of addiction or bad health.  Power of a negative nature is best done during this moon, that which destroys, weakens or lessens.

In astronomy there is no actual “dark moon”, though the moon is dark for a time each lunar month, in astronomy this dark period is called the New Moon.

In Paganism the Dark Moon occurs when the moon is between earth and sun, to find the dates for this moon just find the new moon on any astronomical lunar calendar.

Correspondences, the Dark Moon is a great time of bringing things to fruition, to an end.  It is great for banishing and binding, ridding yourself of anything that needs to be gone.  It is also a time for psychic work, much like the Waning Moon.  It is a time of darkness, of loss and hidden things, including hidden power.  Whilst many believe the Full Moon is the strongest of the phases, others believe the Dark Moon with its mystery and shadow is the more powerful. Following the Triple Goddess the Dark Moon is represented by the Crone aspect. 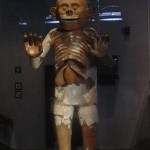 June 3, 2016 Closing the Veil
Browse Our Archives
Follow Us!

Flowers of the Dead
“From my rotting body flowers shall grow, and I am in them...
view all Pagan blogs
Copyright 2008-2020, Patheos. All rights reserved.