Aurboda of the Healing Herbs

Aurboda is a mountain-giantess, mentioned only a few times in the Eddas; and these mentions are pretty vague.  We know from both the Poetic and Prose Eddas that She is the mother of Gerd (who goes on to marry Frey) and the wife of Gymir, another giant.  But the most interesting tidbit about Her comes from the Svipdagsmál, part of the Poetic Edda.  In this story, a woman named Mengloth sits on a healing mountain that can cure any ailment, and around Her sit nine maidens – one of them being Aurboda.

From this we can gather that She is associated with healing, and it’s not much of a leap to say that a mountain-giantess and mother of the goddess of gardens would be specifically associated with plant remedies, or healing herbs.  This is a common gnosis among those who honor Her.

For me, it only gets really interesting when we read the next lines of the poem:

“Tell me, Much-wise, because I’m asking you,
and because I want to know;
whether they protect those who sacrifice to them
if there is need of this?”

“The wise women give protection, wherever men sacrifice to them,
in an altar-hallowed place;
no matter how dire the peril that comes upon men’s sons,

they save them from their straits.”
(from Carolyne Larrington’s translation of the Poetic Edda)

I don’t know about you, but to me that sounds an awful lot like lore-sanctioned sacrifices to a giantess!  To be honest, this very much surprised me when I first read it, but looking back it probably shouldn’t have.  We know that several giantesses were also counted amongst the goddesses, but usually they had ‘married into the family’.  Aurboda is unique in being described here as a girl – presumably before She birthed Gerd, and almost certainly before Gerd and Frey were married – giving protection whenever She is sacrificed to; and yet She is a giantess.

The garden in my backyard is dedicated to Gerd, but I have recently begun a little herb container garden that will be moved back inside to protect the more fragile perennials when winter comes.  This corner of pots is dedicated to Aurboda, who I offer to and who I believe grants my cooking and remedies more effectiveness, especially when I use the herbs from Her garden plot.

It is sometimes easy to overlook the more obscure deities in a pantheon, especially the Germanic ones where writers have a tendency to gloss many deity-names together.  But as a pretty firm hard polytheist, I think it is important to explore each spirit individually; especially if they carry out important functions that are relevant to our lives in a way that the bigger or more well known deities are not.  Aurboda has a great store of wisdom and a great deal of power relating to herbs, and also healthful diets that aid in controlling or preventing ailments; specialized knowledge that, for example, Frigga is not as concerned with.

So make an offering.  Begin to build a relationship, and see what happens.  The best part about obscure deities is getting to know them – there’s always something new to discover! 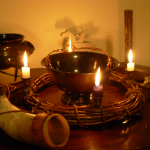 May 25, 2015 Heartland Pagan Festival Experience, Part One
Browse Our Archives
Related posts from Heathen at Heart