Why I am a Heathen

Pagan Church Lady wrote a fascinating post this past week that’s been circling around the various Heathen-leaning parts of the internet, titled Why I Am Not an Heathen (Though I Kind of Wish That I Could Be).  It’s an all-too relatable list of difficulties in the Heathen community: the complete rejection of UPG, dismissal of the larger Pagan community, a glaring disregard for solitary practitioners, right down to the “I’m not racist but..” stance of some in the community.

The comments are largely positive, though one individual does come in to helpfully suggest she “stop being such a fussbudget”.  It astonishes me sometimes what a firm divide seems to have come up in online Heathenry.

On the one hand, there’s people like me, who consider themselves Pagan as much as Heathen; at this point I consider ‘Heathen’ to be a further refining term, and I could go deeper and say ‘Anglo-Saxon inspired Heathen’ but that gets pretty long winded.  It’s not meant to divide me from my Pagan friends and co-religionists.

Largely, my side of the fence is accepting of and interested in UPG, trance work, and various kinds of ‘woo’.  Honestly, I don’t see how to build a religion out of Heathenry without those things – our lore is incomplete and heavily influenced by Christianity.  That doesn’t mean everyone has to practice these things; not everyone has the interest or the ability.  For the most part though, we accept that these ‘woo’ people in our community are having valid experiences.

We are also generally more vocal about social justice issues, and inclusionary of LGBT people and people of color.  While I’d like to say this is just because we’re good people, I think it follows pretty readily from the political split – this side of the fence is pretty liberal, like many Pagans; the other side tends more towards conservatism.

The other side of the spectrum (and like all things, it is a spectrum, though the divide seems to have gotten sharper) emphasizes Heathenry’s distict identity as separate from Paganism.  In the eyes of many, you are one or the other, and claiming both is a sure sign you’re not actually Heathen.

This type of Heathenry also places a heavy emphasis on the lore, and has its own special term for UPG – MUS (or Made Up Shit).  Of course, it’s rarely labelled MUS when it’s coming from the minds of the leaders of this brand of Heathenry, but I digress.  The purest distillation of this is seen on the Asatru Lore forums, where trusted members of my community have been handed threats partly because of their incorporation of UPG.

Obviously, I’m pretty biased here; I consider this other side of Heathenry just as toxic as Pagan Church Lady does, and I’m not thrilled to be associated with or share a label with these people.  But they are a big part of why I finally chose to identify as Heathen these past few years, even though I’d been devoted to a Germanic Goddess for most of my life.

I’m not going to let people scare me anymore.  In fact, I kind of want to scare them.  I’m here, I’m Heathen, and I’m bringing all my UPG, my spiritual woo, my leftist politics, my radical inclusion, my condemnation of racism with me.  I am one more voice adding to the chorus that will help to change the perception, and the composition, of Heathenry.  I am part of a wave that will push back and make room for the people who don’t feel welcome in my religion.  I am a Heathen because I don’t want anyone to “wish that they could be”. 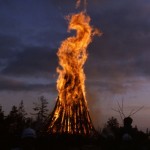 May 15, 2015
The Heathen at the Big Pagan Festival
Next Post

May 20, 2015 Aurboda of the Healing Herbs
Browse Our Archives
Related posts from Heathen at Heart