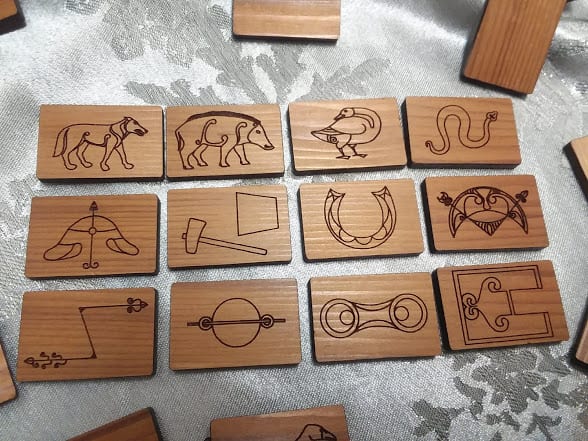 I have a bit of an obsession with history. Things left behind, sometimes easy to find but we can only guess at their meanings or uses. Symbols, pictures, difficult-to-interpret alphabets; I could look at them for hours, full of meaning that we are simply unable to understand.

So when I discovered the Pictish Oracle, 24 cedar wood tiles with mysterious symbols from pre-Christian Scotland, I was fascinated. The set is made by AlaskaLaserMaid on Etsy, who unfortunately is taking a break at the moment because of family and weather difficulty. Beverly King, creator of the Elements of Recovery Oracle, drew the symbols based on several standing stones found in Scotland and dated between the sixth and eighth centuries, and also researched and wrote a small companion sheet to suggest possible meanings.

Scholarship giving these fascinating symbols a definitive meaning is sparse, and arguably impossible with the current resources. There are many ideas, such as this article by Katherine Forsyth at the University of Glasgow. The stones are numerous, and contain around 40 different symbols according to Historic Scotland. They were almost certainly not used for divination, but their mysterious nature certainly lends them to that use in our modern times. 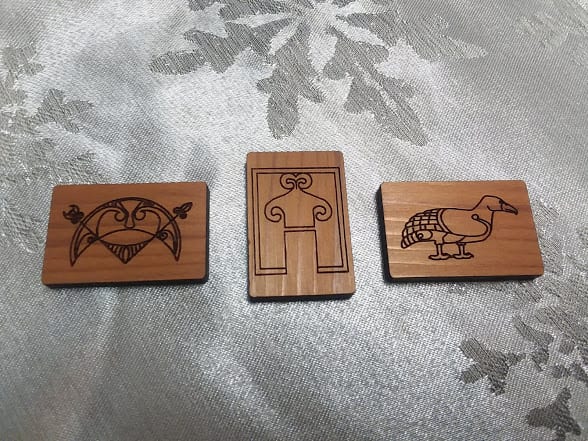 I drew three tiles to ask about my upcoming week, and drew the Crescent and V-rod, Notched Rectangle, and the Eagle. The suggested meanings for the Crescent and V-rod indicate it may be a sundial or other tool used to determine time or seasons, giving it a possible interpretation of the right time to undertake an action. The Notched Rectangle is proposed to be a doorway, and the Eagle is said to represent truth and authority.

I should say that I tend to view divination, outside of a ritual context asking for the input of a spirit or deity, with a rather lighthearted air. I don’t take it entirely seriously; rather it’s the combination of puzzling out a meaning and physically handling the tools that I find calming and centering. So I interpret this draw to be saying that it’s the right time for me to begin something or go somewhere new, while still staying true to myself. Maybe I’ll try a new recipe this weekend! 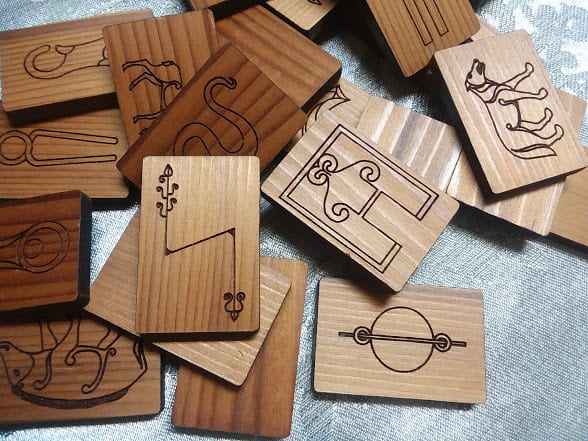 The symbols on the Pictish stones triggered a burst of creativity and interest for me; they may do so for you as well! The drawings are simplistic enough that creating your own oracle set should be relatively easy. A set of wooden chips from the craft store, a fine line pen, and the resources from the wikipedia article on the stones should be enough to get you started! 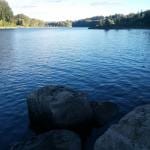 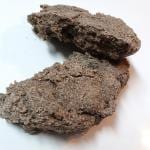 February 18, 2019 Celebrate the Full Moon of Solmonath
Browse Our Archives
get the latest from
Pagan
Sign up for our newsletter
POPULAR AT PATHEOS Pagan
1

Channeling a God, or Why People...
John Beckett
Related posts from Heathen at Heart

Channeling a God, or Why People Need to...
A medium to A-list celebrities charges $1111 an hour and claims to...
view all Pagan blogs
Copyright 2008-2021, Patheos. All rights reserved.