Racism Stole Heathenry’s Past and Threatens our Future

I hate Nazis just a little bit extra today. Don’t get me wrong, on any given day I think the alt-right movement here in the US is an abhorrent trend. I am horrified by the atrocities of historical Nazis and the loss that the Jewish people and the other victims of the Holocaust suffered. I don’t want to minimize or downplay the horrific actions of all involved in the Nazi party. However, I feel it’s important to also talk about the little crimes, the insidious fingers of history that are often unrecognized. Today I am a tiny extra bit angry because I feel that the history, and possibly the future, of Heathenry are being stolen from us.

The History of Nationalism

In my recent review of the Coelbren Alphabet, I learned a lot about the Welsh cultural revival of the late 1700s and early 1800s. Iolo Morganwg may have forged much of his work, but it nonetheless had the intrinsic value of good poetry, and it was one of the key inspirations of the modern Druid revival. The recent history of our world is full of stories like this. A rediscovery of pride in an Irish identity led to the establishment of Ireland as an independent country, and an interest in all things Gaelic by the wider world. The 18th and 19th centuries were a hotbed for this sort of cultural pride.

It was in Germany, as well as the wider Germanic countries such as Austria. But in Germany this pride in the land and the people took a very dark turn. It started out with ridiculous racist claims both scientific and mystical. Scientists at the time claimed that the German people, whom they dubbed Aryans, were proven to be better in every way than other, more degenerate races – particularly Jewish people, but also the Roma and often Slavic peoples as well. Mystics at the turn of the twentieth century, such as Guido von List, claimed that the Gods had given the Aryan people superiority. List went so far as to claim that Kabbalah was a Germanic invention corrupted by the Jewish people. This was all happening decades before the Nazis came to power.

What Do We Do About It?

This is abhorrent. Such obviously, openly racist discourse should never be allowed, let alone accepted as it generally was at the time. Here’s the trouble for modern Heathens. Many occultists and mystics in Germany at this time were coming up with interesting ideas, developing fascinating systems, writing beautiful and heartfelt words about their homeland; much like Iolo Morganwg in Wales. Is it all ruined by their racist ideologies, or can some of it be salvaged, the bad cut out and the good saved?

I personally must argue that it’s not okay. As much as I’d like to go through List’s book The Secret of the Runes and experiment with his Armanen system, I ended up getting about halfway through and giving up. I felt sick reading his little asides about the superiority of the German peoples; now we know the end of that story.

There are others who feel differently. Stephen Flowers, best known to Heathens as Edred Thorsson, translated The Secret of the Runes into English and made it available to a modern American audience. He spends the forward of the book earnestly white-washing List’s obvious racism and ideas of German superiority. He attempts to wave it away as “the culture of the time”. I come off as very biased here, but I simply can’t accept that. I hate that these historical figures with their keen minds and good ideas were taken in by such awful propaganda, but I can’t in good conscience use their material knowing that they were. Not only were they taken in, but in turn helped to promote their racist garbage.

The Future of Heathenry

And so we come to the future of Heathenry. As the alt-right movement has tried to move closer to mainstream acceptability, the swastika has become a less favored symbol. The Othala rune, the Algiz rune, the black sun, all of these have begun to be used by Neo-Nazi groups. Heathens Against Hate recently posted a video promoting the use of the Othala rune by inclusive Heathens as a way to keep the symbol from being associated exclusively with racist ideology.

I’m not sure how to feel about this. On the one hand, allowing religious symbols to become tools of those who advocate for such horrible philosophies is abhorrent to me. On the other hand, I do wonder if there’s any way to stop the corruption of these symbols. As terrible as it is, the alt-right movement outnumbers (and certainly out-publicizes) inclusive Heathens, especially those who are open about their spirituality with the world. It’s not fair that we should have to give up using certain symbols, but is it worth the association with Neo Nazis and white supremacists?

I think that’s a question every Heathen will have to answer for themselves; hopefully with some input from those who are most impacted by this hatred. I find myself angry and also sad that our history has been appropriated for hatred both in the past and again in the present. But what I find most abhorrent is that my runic tattoos – one of which reads “honor to the land” and the other “honor to the waters” – might cause anxiety or fear in people I don’t even know. That innocent and sacred things I love could hurt fellow human beings because of racist idiots both past and present sucks. 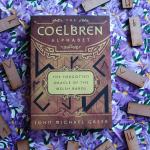 March 11, 2019
The Coelbren Alphabet: The Forgotten Oracle of the Welsh Bards
Next Post 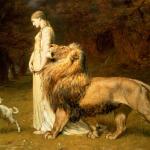 Why I Absolutely Loathe And Despise...
Tea Addicted Witch
Related posts from Heathen at Heart

Self-Initiation as a Solitary Practitioner: What Works and...
Initiation is never required, but it is often helpful. And while self-initiation...
view all Pagan blogs
Copyright 2008-2020, Patheos. All rights reserved.