The Liminal Space Between Science and Symbols

The Liminal Space Between Science and Symbols June 6, 2019 Molly Khan

“Truth” is a tricky word. When I first began exploring occult subjects as an early teen, I was fascinated with the I Ching, astrology, tarot cards. Everything seemed symbolic and mysterious. I remember vividly speaking with someone about the constellations: “But they’re all made up,” they argued. “They’re not real.”

Those are two different statements, though. I believe firmly that something can be both made-up and real. The idea of constellations was invented thousands of years ago, pictures drawn in the stars. It was an idea that resonated with humanity and became real. With our modern science, however, we come to another hurdle.

The constellations, the stars, they are millions and billions of miles away from us (and each other). They are spheres of gas burning in a constant nuclear reaction. They are huge beyond imagining, awe-inspiring; and by their existence defy thousands of years of human theory about our world. They do not actually revolve around us. Even our own sun does not.

Does that change their nature? For thousands of years, astrology and star magic relied on the idea that these pinpricks of light slowly rotated around us in a perfect celestial sphere. Does knowing the truth change the magic we work or the things we foretell?

The moon, the sun, anything out in space is an example of this. Mani and Sunna are deities, brother and sister. They are also physical objects that give us light, discs that seem to chase one another across the skies. And thanks to modern science, we now know they are enormous worlds in their own right, floating out in space beyond where most of us will ever reach. Mythology about the sun resting in a mythical realm each night seems outdated at times.

It’s still relevant on a smaller scale. Even small things are bigger than they once were. The stream near my home has its own spirit, but what happens to that spirit when the stream meets a river, and that river a bigger river, on and on down to the ocean? Ancient tribes worshiping an earth mother Goddess had no concept of just what the Earth meant, how much it encompassed. Our picture of our world as a whole, cohesive little globe floating in the dark is entirely modern. How do we, with our modern mindset, square the ancient perspectives with science and reason?

I argue that we don’t have to. Cognitive dissonance is a thing, but it’s possible to hold a thing in your mind as both a symbol and a reality. Sunna is a goddess, fiery and life-giving, warmth and life, who travels around our world each day in a blazing chariot. The sun is a giant ball of gas, a fire that will eventually go out, life-giver to everything on our planet, and a cure for my depression. All these things can be true at once.

Ambiguity is scary to us as humans. As children, one of the first things we learn is how to classify things. “Boys have short hair.” “Girls wear dresses.” Most kids are more rigid in their gender definitions than adults are, because they are just learning to classify and everything must be black and white. Grey is difficult to understand, to handle. Deep down, many of us are still like children in this way.

For me, learning to embrace that ambiguity gave me power. When I was very young and learning about Wicca, I took “harm none” to heart. It resonated with how I was raised: sit still, speak softly, don’t bother anyone or speak up about your needs. Just keep the people around you happy and cross your fingers they’re nice to you back.

Harming none is hard, though. I eventually learned it’s okay to disappoint others if it means caring for myself. Other people can be hurt (disappointed, angry) without me actively harming them at all. As a people-pleaser this lesson, that hurt feelings do not mean I shouldn’t have done something, is an ambiguity that’s changed my life for the better.

Most European-based Pagan religions, Heathenry included, find power in the liminal. The places in-between, neither here nor there, are where strength and understanding lie. Of course most of us believe the Earth is round and the sun is burning far away; but this doesn’t need to take away from the symbolism of our religions and deities. The Earth is also a brown and green Goddess of rolling hills that stretch out to the horizon. The sun is a fiery chariot of beauty and light. 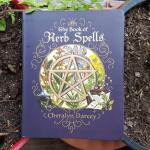 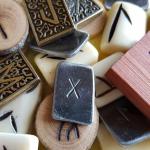 June 13, 2019 The Thrifty Heathen's Guide to Crafting Runes
Browse Our Archives
get the latest from
Pagan
Sign up for our newsletter
POPULAR AT PATHEOS Pagan
1

The Corner Crone: Ready or Not, Here Comes...
As the Spring Equinox approaches it feels as if I need to...
view all Pagan blogs
Copyright 2008-2020, Patheos. All rights reserved.