Huckabee and American Ministers Invigorated by the Power of the Cross in Poland, Seek to Harness that Power in America

A common theme arose throughout Gov. Mike Huckabee’s Journey tour with Christian leaders in Poland. They heard firsthand how Poland’s freedom from communist occupation was significantly possible because of Pope John Paul II. But equally important, was the Polish people’s struggle to maintain their national identity, which was deeply rooted in their Roman Catholic faith.

When the Soviets occupied Poland after World War II, they systematically destroyed churches, removed crosses in public and private locations, and eliminated any expression of their faith or face prison. Every aspect of their lives had been stripped away to the point that they did not know who they were and felt complete despair.

Much of communism required destroying and taking away land. One such area, a few miles from Krakow, had long been significantly fertile agricultural ground. The Soviets destroyed it to build their “model communist city,” Nowa Huta. Meaning “New Steelworks,” after the newly created steel industry. Nowa Huta was a centrally planned “ideal urban” housing community and specifically exclude all things related to God.

Within seven years the oppression of the Polish people caused them to long for God even more. They wanted God and a place to meet him, in church. On March 17, 1957, a cross was installed and consecrated on a site in Nowa Huta, a hopeful future site for a church building. However, by April 1960 the Soviets withdrew permits to build any structure and removed the cross. Riots ensued and thousands of residents, along with Archbishop Eugeniusz Baziak and then Bishop Karol Woityla protested on April 27, 1960. By 2001, twelve years later, the church was built. On the cross are hand imprints, referencing the Pope’s call “to cling to the cross.”

to “cling to the cross.”

Monsignor Jaroslaw Culecki, a Polish News Director at the Vatican, provides poignant insight from his experience at the time. He said,

On June 10, 1979, the Pope held a public mass in the Blonia park, known as the Blonia Krakowskie.

More than three millions Poles united together and heard the Pope’s admonition:

“With what argument, what reasoning, what value held by the will or the heart does one bring oneself, one’s loved ones, one’s countrymen and nation to reject, to say “no” to Him with whom we have all lived for one thousand years? He who formed the basis of our identity and has Himself remained its basis ever since…

From then on, there was no turning back.  The Poles sang, “we want God in the family circles, in the care of parents, in our children’s dreams.”

What happened next was remarkably told by the Solidarity Movement’s underground chaplain Wladyslaw Palmowski to Journey participants via a translator. He said, “Those who protested against communism were arrested and killed and thousands lost their jobs.” On December 31, 1981, he explained, “everything went silent.”

Martial law was enforced; many disappeared over night, many homes were broken into and the army surrounded the steel factories. He decided, “it was up to us, the church, whether our people would be alone or receive brotherly help.” From the beginning he encouraged people to come to church, and the confessional became the center of their community. He smuggled food and held secret masses, and spent more than 200 hours with prisoners at internment camps.

One of the most striking comment he made was that he could have been killed at any time because he was #4 on the Soviet’s secret police hit list. The only reason he was not killed, he maintains, was because of the Pope.

“The Pope,” he said, “was the buffer protecting us from the Soviets. He became a symbol of hope for us, telling us we are not alone in this world.”

After Palmowski spoke, Pastor Ken Graves of Calvary Chapel in Bangor, Maine, prayed for the group. Referring to John 2, he encouraged ministers to be inspired by zeal. Referring to Acts 19:15, (in which a demon says, “Jesus I know, and Paul I know, but who are you?”), Graves proclaimed, “may we as ministers be honored to be on the list [as Palmowski was.] To be unknown in hell as a minister is a great disgrace.”

Reflecting on Palmowski’s and Graves’ comments readily brought to mind my experience worshipping in a church in France, hearing for the first time hymns written and performed by Northern Irish hymn writers Keith and Kristyn Getty. In The Power of the Cross, the melodic crescendo increases with each phrase, so that while singing, one cannot help but be overcome with grief, humility, sorrow, and indescribable hopefulness.

In Communist-occupied Poland, Christians found their only freedom in their local church. They felt like foreigners in their own land, but the cross was powerful enough to change their lives and their country.

Because of this, the Poles knew what many take for granted: that Beneath the Cross of Jesus, Christians have a place to stand and belong. Those who cling to it receive indescribable hope and everlasting joy, something that even the communist secret police could not overpower. 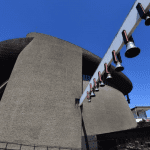