Christians believe that God created the Earth and everything in it. He also created three methods for societal order by establishing the government, the family, and the church, which together sustain right moral living and encourage human flourishing.

God cares about all of his creation, especially government, because without restraining evil, anarchy and lawlessness will prevail. Society’s natural state is self-serving destruction, which is why Christians are required to impart righteousness in all areas of life.

A state that is righteous honors and protects the life that God creates. Its leaders are primarily concerned with protecting their citizens from threats both foreign and domestic. A righteous state enacts and enforces just laws, promotes economic growth, and peaceful living.

The alternative, Plato warned is, “The price of apathy towards public affairs is to be ruled by evil men.”

Before becoming involved in politics, Christians must first petition God for mercy and forgiveness, pointing to his promise given in 2 Chronicles 7:14: “If my people, who are called by my name, will humble themselves and pray and seek my face and turn from their wicked ways, then I will hear from heaven, and I will forgive their sin and will heal their land.”

We must next appeal to government officials, fellow citizens, and people of faith to ensure that existing laws are enforced for ours’ and others’ well-being and protection.

Christians must not only hold elected officials and the news media accountable but also run for office themselves. Whether for the school board, county commissioner, city council, mayor, state or federal legislative positions, it is imperative they be involved.

This is not a call “to take our nation back” or to “Christianize America.” It is a call for Christians to embrace our purpose to glorify God in all of our endeavors, contributing to human flourishing and restraining evil. Understanding that the government, the law and human rights do not exist without the God who established them.

Because God created government — and in fact everything — every area of life, politics is spiritual.

Christians must point to the God who created our rights like the Apostle Paul, who claimed his rights under Roman law as a Roman citizen. “I appeal to Caesar,” he said in Acts 25:11.

And imitate Nehemiah, circa 445 B.C., who was an expendable slave and still successfully led the rebuilding of Jerusalem. “Professionally,” he was ill-equipped, but he successfully accomplished what was required of him. He first focused on national security by rebuilding Jerusalem’s walls— strengthening its borders from external threats.

Next, he rebuilt a government in complete disrepair. And after these monumental tasks were accomplished, he focused on getting his people, an entire nation, out of debt — which he did more than once.

If an expendable slave could rebuild Jerusalem, American Christians can rescue and defend those who cannot defend themselves (Prov. 31: 8,9; Isa. 1:17) and work to expose and prevent evil as much as possible (Ezek. 3, 33).

March 4, 2015
The Supreme Court and Pastors on Marriage [video]
Next Post 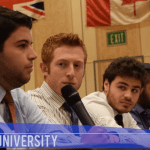 March 5, 2015 Jews Most Targeted Victims of Hate Crimes in America, on College Campuses [video]
Browse Our Archives
get the latest from
Evangelical
Sign up for our newsletter
POPULAR AT PATHEOS Evangelical
1