Iran (the modern name for Persia) represents one of the most ancient civilizations in the world. Its land and people are inextricably linked to biblical historical events and prophecy.

Despite decades of disastrous American foreign policy, 21st century American Christians should recognize their faith is linked to God’s promise to the people of Iran. He said: “In the last days I will restore the fortunes of Elam.” (Jer. 49:39)

Persians are direct descendants of Noah’s grandson, Elam, son of Shem. Under the Achaemenid Empire (550-330 B.C.) Persian kings publicly recognized the God of Israel and his people.

King Cyrus the Great was the first to make a public declaration of human rights for the Jews in an empire that included 127 provinces spanning from India to Ethiopia. One hundred years before Cyrus’s birth, the prophet Isaiah referred to Cyrus as “God’s anointed” and “God’s shepherd.” (Isa. 44:28; 45:1)

King Cyrus enabled the Jews to return to their homeland in Israel to rebuild their temple in Jerusalem. He also returned 5,400 Temple items of gold and silver to the Jews, which King Nebuchadnezzar had taken from Jerusalem to Babylon, present-day Bagdad, Iraq.

“The LORD, the God of heaven, has given me all the kingdoms of the earth and he has appointed me to build a temple for him at Jerusalem in Judah.” (Ezra 1:2-4).

King Darius I greatly admired Daniel, who first lived in captivity in Babylon, as a scribe in the court of Nebuchadnezzar. Later, Daniel lived in Susa, the Persian Empire’s capital, present-day Shush, roughly 150 miles east of the Tigris River, near Iran’s southwestern border. Its capital later became Persepolis, an architectural wonder.

“God, protect my country from foes, famine and falsehood. … I issue a decree that in every part of my kingdom people must fear and reverence the God of Daniel. For He is the living God and He endures forever… He rescues and He saves; He performs signs and wonders … He has rescued Daniel from the power of the lions.” (Dan. 6:26-27).

After efforts were made to halt Temple rebuilding efforts, King Darius instructed that, “full costs be paid to the Jews from the royal treasury out of the provinces beyond the River, and that without delay.” Additionally, those who protested against the Jews were ordered to provide them with food—daily— or be impaled against the beam of their homes, which would become a “refuse heap.” (Ezra 6)

Darius proclaimed: “May the God who has caused His name to dwell there overthrow any king or people who attempts to change it, so as to destroy this house of God in Jerusalem. I, Darius, have issued this decree, let it be carried out with all diligence!” (Ezra 6)

Darius I’s son, Xerxes I, married an Israelite, Esther, who as queen also lived in Susa. Darius responded to her plea to save the Jews, by not only saving them, but also by institutionalizing their legal rights in all 127 provinces under his reign. Couriers riding royal horses carried letters sealed by Darius’s signet, stating every Jew had “the right to assemble and to defend their lives, to destroy, to kill and to annihilate the entire army of any people or province which might attack them, including children and women, and to plunder their spoil.” (Esther 8)

Like Daniel and Esther, Nehemiah also lived in Susa. He and Ezra led the rebuilding of the Temple and wall in Jerusalem, interacting with Kings Cyrus, Darius I, and Xerxes’s son, Artaxerxes I.

Artaxerxes I decreed that Ezra, a Jewish scribe (who had “set his heart to study the law of the Lord and to practice it, and to teach His statutes and ordinances in Israel”) could go to Jerusalem with “any of the people of Israel and their priests and the Levites in my kingdom who are willing to go.” (Ezra 7)

Artaxerxes I not only gave the Jews safe passage to Jerusalem but also ordered his army officers to accompany Nehemiah and carry letters with his seal to each province’s governor expressing his support. Additionally, Artaxerxes provided Nehemiah with timber from his royal forest to build the fortress’s gates, the wall of the city, and the house where Nehemiah would live.

Prophets Zechariah and Haggai were integral to encouraging Jews whose reconstruction efforts were consistently interrupted over many years. Habakkuk, who also prophesied over Persia, died and was buried in Persia.

Many First Century Christians lived in, were missionaries and/or supported missionaries, throughout Persia. One notable missionary was Jesus’s disciple, Thomas, otherwise known as “Doubting Thomas.” (John 20:24-29). Most historians believe the second oldest church in the world is the Church of St. Mary, located in Northwestern Iran.

Today, Iranian Christians represent .08 percent of the population. Despite increased persecution their numbers are growing. According to the Joshua Project, there are 78 million people (86 unreached people groups) in Iran.

An incredible opportunity, and responsibility, exists for American Christians, specifically advocates of “a Christian America,” to provide tangible support for Iranian Christians who need of Bibles in various languages (even though illegal), and humanitarian and pastoral aid. 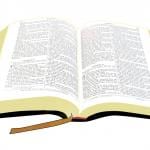