California churches are defying and suing Gov. Gavin Newsom over his most recent executive orders that prohibit church congregants from singing and holding in-person services.

On Sunday, Harvest Rock Church held in-person services, led by Pastor Che Ahn, who delivered a message to the governor that was posted on Facebook.

“As a pastor, I believe we’ve [the church] been essential for 2,000 years,” he said. “There is something larger at play here, there is a spiritual battle that is taking place over our nation and over our state.”

On late Friday, Harvest Rock Church and Harvest International Ministry Inc. sued the governor in federal court in Los Angeles. On Saturday, they filed an emergency request for a temporary restraining order to halt the threat of enforcement of the governor’s order. No scientific evidence exists to prove that singing spreads the coronavirus or poses an imminent danger to congregants or anyone else, they argue.

The churches are represented by the nonprofit law firm Liberty Counsel, which specializes in religious liberty litigation. Their lawsuit joins another filed last week against Newsom by three Sacramento area churches who also allege his order violates the Free Exercise clause of the First Amendment.

“The Governor cannot claim a compelling, legitimate, or even rational interest in his orders when he has permitted and encouraged mass gatherings of thousands of protesters to engage in the very activity he claims poses a massive danger to California if it takes place in Plaintiffs’ churches,” Harvest Rock’s 74-page complaint states.

Harvest Rock has 162 member churches throughout California, including campuses in Los Angeles, Orange and Riverside counties. It alleges that it “cannot fulfill its vital ministry and sincere religious beliefs without gathering together in person, and that it cannot effectively engage in its constitutionally protected free exercise of religion on the internet.”

The governor deemed religious institutions and houses of worship as entities providing “nonessential services,” ordering them to close in March. Restrictions subsequently eased after more lawsuits were filed.

Newsom then began walking back on reopening plans after the state reported a number of increased cases, and added a new ban on singing and chanting solely in places of worship, and again prohibited indoor services from taking place.

“Practices and performances present an increased likelihood for transmission of Covid-19 through contaminated exhaled droplets and should occur through alternative methods like internet streaming,” the state Health Department said.

Many have said they cannot in good conscience follow Newsom’s orders.

Fresno-based Cornerstone Church pastor Jim Franklin also held indoor services, after publicly stating that because of the extremely hot heat in California’s Central Valley, it was unsafe to hold church services outside. Franklin also sued Newsom in May over his order limiting church attendance.

Komush said Newsom is “targeting” churches to “make an example” of them. “Enough is enough,” he said. “We believe as Christians that we are being attacked. We can pray, and that’s a great thing, but at some point, you have got to take action too.”

Several California pastors have also called on President Donald Trump to intervene, pointing to the U.S. Department of Justice’s guidance warning governors, including Newsom, to not impose “unfair burdens” on houses of worship.

July 17, 2020
37 states have Blaine Amendments blocking public funds from religious schools in their constitutions
Next Post 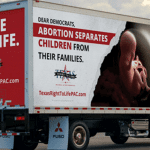 July 22, 2020 Storm brewing in East Texas over "criminal act" of abortion, "Sanctuary cities for the unborn"
Recent Comments
0 | Leave a Comment
Browse Our Archives
get the latest from
Hedgerow
Sign up for our newsletter
POPULAR AT PATHEOS Evangelical
1

The 2021 SBC and the Cost...
Anxious Bench
Related posts from Hedgerow