The Oneness In Silence Is Greater Than The Dualism In Words

The Oneness In Silence Is Greater Than The Dualism In Words May 17, 2017 Henry Karlson

Three Fathers used to go and visit blessed Anthony every year and two of them used to discuss their thoughts and the salvation of their souls with him, but the third always remained silent and did not ask him anything. After a long time, Abba Anthony said to him, “You often come here to see me, but you never ask me anything,” and the other replied, “It is enough for me to see you, Father.” [1]

It is common for those who become famous have all kinds of people who congregate around them, seeking their attention. Anthony was no different. He received many in his cell who came to him because of what rumors and gossip had said about him. His exploits in the desert became very well-known and talked about within the Christian community. It should not be surprising, then, many came to him, wanting to be his disciple, vying against anyone else who would come to Anthony seeking to be his disciple. They thought the way to do this was to make him aware of who they are and what they have already done, often asking questions in relation to what they have achieved as a way to show off their accomplishments. This is why it is not surprising to hear stories of Anthony in which other monks, who had already followed him into the desert, wanted to make their way to Anthony, to see him, to hear him talk, to ask him questions, all so they could receive guidance from Anthony and then show how worthy they were for his attention. What they sought was good, though perhaps it was excessive. Much of what they did and said could even have been for show. They said and did what they thought Anthony would approve so that they can receive his blessing and support in monastic circles.

And so, when we turn to this little story of three monks making their rounds and visiting Anthony, two of them made their presence known by making a lot of noise. The other one was silent. He enjoyed being in the presence of Anthony. It was enough for him. All other noise could be filtered out;  he understood that the good was to be had in a silence which transcended all such questions. The presence of Anthony helped because in Anthony he saw one who had been glorified in Christ, and the presence of grace in Anthony was able to help him far more than all the words Anthony could have given about that glory – the experience of glory was a greater motivation and aid than its explication.

The silent monk, therefore, chose the better path. the other monks still could be shown to have chosen a good path, for they could learn from the words of Anthony. The silent monk was able to appreciate the esoteric truths which need not be spoken, while his companions needed the exoteric guidance. We have, therefore, a similar circumstance as we saw  with Mary and Martha before Christ:

Now as they went on their way, he entered a village; and a woman named Martha received him into her house.  And she had a sister called Mary, who sat at the Lord’s feet and listened to his teaching.  But Martha was distracted with much serving; and she went to him and said, “Lord, do you not care that my sister has left me to serve alone? Tell her then to help me.” But the Lord answered her, “Martha, Martha, you are anxious and troubled about many things; one thing is needful. Mary has chosen the good portion, which shall not be taken away from her” (Lk. 10:38 – 42 RSV).

Martha wanted to show herself to Christ, and thought Mary also needed to do so. She loved Christ, it is true, and what she did was good. She wanted to render service, thinking it would help put her in greater graces with Christ. She was distracted with all kinds of external goods, with secondary goods which were good and with value, but because of that distraction, she could not entirely appreciate the good of being in Jesus’ presence; she was not yet ready for the meditative peace which her sister, Mary, was able to find. Mary had chosen the higher, greater good by emptying herself of those secondary goals, but Martha still did and desired good, and what Christ said was not to undermine that good but to chide her for her judgment of Mary and her misunderstanding of which good was the greater good, a misunderstanding which was behind her misjudgment, as Augustine also understood:

And yet it is not so; but as the Lord spake so it is. It is not as thou understandest; but it is as thou oughtest to understand it. So mark; “Thou art occupied about many things, when one thing is needful. Mary hath chosen the better part.” Thou hast not chosen a bad part; but she a better. And how better? Because thou art “about many things,” she about “one thing.” One is preferred to many. For one does not come from many, but many from one.[2]

Mary had chosen the better path because she had calmed her mind, emptied herself of all secondary thoughts, so that she could sit in front of Christ and receive the glory of his presence. Thus, Martha is seen to stand for the active life, the life in the world, the life still attached to secondary goods, while Mary stood for those who found a way to detach themselves from such secondary goods and to be entirely devoted to the higher, spiritual good which lasts. But, both the active and contemplative life, are necessary – those who seek an active life in the world still need to take time for themselves, to empty themselves and engage meditative peace, while those who seek a contemplative life must engage it while keeping open to the good of others, to the love for their neighbor, and so not abandon them selfishly for the sake of meditation. Of course, as Origen explained, those who properly follow the contemplative life are more likely to gain greater insight from it and so find themselves closer to perfection:

You might reasonably take Martha to stand for action and Mary for contemplation. For, the mystery of love is lost to the active life unless one directs his teaching, and his exhortation to action, toward contemplation. For, there is no action without contemplation, or contemplation without action. But we should rather say that Martha received the word more somatically, in her house – that is, in her soul – whereas Mary heard it spiritually, even if she sat “at his feet.” This means that she had already passed beyond what was handed down by way of introduction according to the plan of salvation, since she “had put aside the things of a child” but had not yet received what is perfect. [3]

The meditative embrace is able to appreciate the non-dualistic nature of the world; that is, as Meister Eckhart explained, the point of saying “one thing is necessary.” It is one thing – the unity which transcends the dualistic divide in the world – which is to be sought. Mary was able to find it because she emptied herself of all distraction, of all the worries which come from the dualistic form of experience of the world, so that she was able to experience unity between herself and Christ, unity which we should all seek to experience. Martha, therefore, had to be told what Mary experienced, as Eckhart preached:

This is how it was with dear Martha. Thus he said to her, “One thing is necessary,” not two. You and I, once embraced by the eternal light, are one; and this two that is one is a flaming spirit standing above all things (yet under God) on the rim of eternity. It is two because it does not see God without something mediating. Its knowing and its being, or its knowing and the image that it knows, will never be one. They do not see God, for there God is only seen spiritually, free from all images. One becomes two, two is one; light and spirit, these two are one in the embrace of eternal light.[4]

The better part is found in unity, found in the non-dualistic engagement with the world which understands the interdependent relationship between the people of the world. We are to be united together with each other in our personal relationships with each other; we are not to be absorbed in a unity which makes us lose our personal identity, even as we find we are not pure individuals divided from each other. Those who came to Anthony seeking his guidance and wisdom, like Martha, had yet to appreciate this non-dualistic mode of experience; only their fellow monk who silenced himself was capable of being with Anthony and finding it was enough because by being in Anthony’s presence, the monk could realize unity with Anthony, a unity which required no words.

We are not told what Anthony said in response. We do not need to be told. The silence is the response, the affirmation of his unity with the monk who came to him. Anthony’s silence bloomed forth into this saying, a rose which is lifted up for us to admire. If we seek wisdom, let us respond in kind. 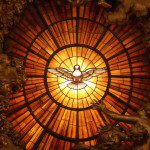 May 16, 2017
On The Sacrament Of Baptism: Conclusion
Next Post 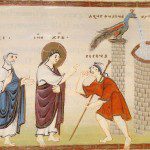 May 19, 2017 Sunday Of The Man Born Blind
Recent Comments
0 | Leave a Comment
Browse Our Archives
get the latest from
A Little Bit of Nothing
Sign up for our newsletter
POPULAR AT PATHEOS Catholic
1