This is the final year of my PhD and the pressure is rising. I live in The Netherlands, and am completing my PhD in medicine at a university hospital. The past few years with Ramadan I was able to adjust my schedule a little bit: I wasn’t working late (a 36-hour workweek would have to do) and I came in a bit later and left later. Elhamdulillah, this was possible thanks to the flexible hours of doing a PhD here. The time I had left was invested in strengthening my relationship with the Quran. Iftars for me mean family time. I hadn’t spent a single Iftar alone in my life, being fortunate enough to always been surrounded by loved ones. But this year, Ramadan was to have a different start.

With mountains of work still to do, I prepared for our biannual large congress, which took place in Toronto, Canada this year in exactly the first week of Ramadan. The prospect of being away from my husband – our first Ramadan as a married couple –, family and friends, and the fact that I would be spending it mostly alone, or with non-fasting or non-Muslim (and mostly atheist, which in my opinion are the hardest audience to explain Ramadan to) colleagues, wasn’t exactly reassuring. I had a heavy heart going into Ramadan. 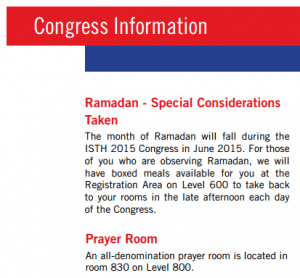 Because of the long flight and the time-difference, I was not able to fast during my travels. But once I arrived at the congress centre, I ran into a pleasant surprise. The lady at the registration desk told me that since the congress falls in the holy month for Muslims, special considerations were taken. We were able to pick up our cool boxed lunches in the late afternoons.

When I responded: ‘Wow, that’s very considerate, thank you’, she mentioned that it is common courtesy to take into account a large population of individuals that are fasting. ‘We would’ve done the same if it were a Christian or Jewish holy time.’ I smiled at her and nodded. I had been to Canada before, but I had forgotten how kind and thoughtful these people are.

‘Oh, and you do know that there’s a prayer room, right? Just here downstairs.’

Later that day I went to find the prayer room. An empty room with a prayer rug spread on the floor indicating the direction of the Kaaba. The rest of the week I was able to perform my prayers there. Elhamdulillah.

From my experience of breaking my fast alone in my hotel room, I pray nobody finds themselves in a situation like this. But every down comes with an up. In one of the final days of the congress, my colleagues and I went up the CN Tower to have dinner. As dinner was going to be at 9 pm, exactly at the time of Magrib, I was able to join. I witnessed, high up in that tower with a beautiful view over Toronto, the beauty of the sun going down at Magrib time. I didn’t need a watch or an iPhone to know when I could break my fast: seeing the sun disappear at the horizon was enough.

Alev is an MD/PhD candidate in the Netherlands, with love for many more things outside of medicine. Find her on Twitter @Alevvvelaa