“Jump in – I’ll catch you!” My swim teacher is patient. I am 7 years old. My new bathing suit is shiny. My hair is in a bun under the swim cap. This is my third false start. I take a deep breath, close my eyes. Finally, I jump.

Freckled shoulders, dark eyes, a supportive smile. “You did it! Now let’s learn how to float!”

She’s so enthusiastic because she loves swimming and wants me to love it, too. I’m a Polligwog, the starting level for swimmers my age at the YMCA. The other Polliwogs are Black, Latino, White, boys and girls. I don’t know their religion and they don’t know mine.

That summer, we all discard our fear of the water and learn how to float, kick, glide, and stroke. I develop a deep love of swimming that remains to this day. I’m no Katie Ledecky, but I will jump into any pool to which I have access.

The challenge arose as I grew older and started covering my body and hair in public. When I was a teenager, my mosque rented pools and hosted women & girls days. We wore spandex, knee-length, biking shorts and bathing suits, even in that single-gender environment. Pool days were fun, but only happened a few times every summer.

I wanted to swim all the time, not only on special occasions, but the the cotton t-shirts I started to wear over my swimsuit as I got older (for modesty’s sake) were not welcome at local pools because the lint could potentially clog the filters. I never felt oppressed by my clothing choices, but I wished I could find a way to swim anywhere and anytime.

Imagine my joy when I first heard about the burkini making waves in Australia. In the early 2000s I was hardly aware of a Muslim community in Oz, but the story made sense: Australian Muslim women want to enjoy the beach culture of their country just like everyone else, without compromising their faith convictions. I bought my burkini at an Islamic conference and when my job required traveling, my burkini came with me.

When I think of my burkini, I don’t ponder what it means for democracy, secularism, and religious diversity. I think of access. Because my burkini has allowed me to jump into any pool, anywhere in America. I swim with women, men, and children and I’m not segregated the way we were at the mosque’s Pool Days. I have never had a problem with authorities stopping me from swimming. If someone had a question, all they had to do was check the fabric of my suit to know that it was made for the pool. But this is America, where our understanding of secularism means that both freedom of and freedom from religion is protected under the Constitution.

I have never packed my burkini for my work trips to Europe. I really don’t want to create an international incident with potentially Islamophobic hotel workers who cannot fathom a Muslim guest going for a swim while fully covered. Secularism in Europe, and especially in France, often means outward conformity. Practically, it has led to religious minorities compromising their faith in public in order to be tolerated by society.

The key word here is tolerated. And that is my problem with the ban on burkinis in various French cities: while French citizens are supposed to be equal under the law, some French officials cannot even tolerate French Muslim women who wear the burkini, calling them unhygienic and disrespectful, while others say that the burkini is an example of the “enslavement of women.”

Objectively speaking, it is ridiculous to say that you are banning a type of clothing because you don’t want women to be told what to wear. That is not feminism; it is farce. It is so bizarre to hear the French Prime Minister support the burkini bans in the name of encouraging “social unity,” that I wonder if Monsieur Valls is just trolling us.

The application of French laïque law upholds their cultural norm that society’s freedom from religion trumps an individual citizen’s freedom of religion. It also upholds the idea that religious minorities who don’t compromise their faith values are a menace to society. That is why Muslim women are now getting fined for going to the beach in a burkini.

The French cities’ bans on burkinis is just the latest example of their hypersecularism run amok. I’m confident the French will continue to find ways of further alienating their own citizens because they are convinced this is the way to develop a harmonious society, even though the hijab and niqab bans of the 1990s and 2000s have indeed not ushered in Mr. Valls’s vision of social unity. Banning religious clothing as a way to promote social cohesion in a religiously diverse society is a non-starter.

It seems to me that Prime Minister Valls and the French mayors’ vision of social unity is that some French citizens are tolerated while they remain hidden away in working-class banlieus. That they cannot enjoy the same lifestyle as other French people. That Muslim women should not be seen nor heard. That French Muslims should know their place. And that place is apparently not at the beach. Quel dommage!

The irony of these burkini bans is this: if Muslim women had remained segregated, swimming during designated times at private pools – or not swimming at all – then French officials wouldn’t ban their swimwear in the name of social cohesion. It is in fact Muslim women, by swimming at public pools and beaches, who are integrating and refusing to segregate themselves. They are not telling others what to wear at the beach; they are not forcing others to cover up.

They are in fact being as French as can be; they are French women trying to enjoy the last days of summer at French beaches. By joining everyone at the beach while wearing the clothes that make them comfortable, French Muslim women are taking the lead in integration and developing social unity. As Professor Farid Hafez, an Austrian expert on Islamophobia in Europe, commented, “When Muslim women were cleaning windows with headscarves on, nobody cared, now they go to the beach and everyone is talking.”

July 22, 2016
Muslims and the #BlackLivesMatter Movement: A Roundup
Next Post 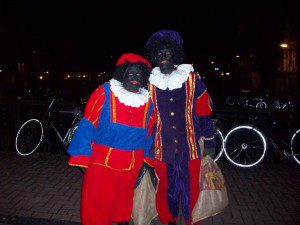 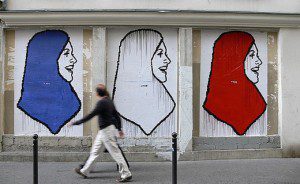 Muslim
Mawlid 2017: Muslim Praise-Songs from around the World
Hindtrospectives
TRENDING AT PATHEOS Muslim