On the Gender of God & Divine Pronouns

Historic Christian orthodoxy has always maintained—at least on a technical, theological level—that God is neither male nor female. As a spirit (John 4:24), God obviously does not have a biological sex. And since God created male and female (along with every other gender) in her own image (Genesis 1:27), she can be best understood as encompassing all genders.

Now, perhaps you bristled a bit at the use of female pronouns for God in the previous sentence? If you’re not used to seeing that, it can be a bit startling. And maybe it should be. But the thing is, it should really be equally startling to see male pronouns used for a gender-encompassing God.

Throughout the Bible, and for the majority of church history, people have tended to refer to God using male pronouns. God is represented by plenty of female imagery as well, including in scripture, but the pronouns themselves have almost always been male. This is due to no other reason than that human language has historically tended to use male pronouns as the default option when no specific gender was intended.

But that is changing. We’re learning today—thanks in no small part to feminist and womanist scholarship—just how harmful such androcentric (male-centered) language has been to all of us. In the realm of theology in particular, our use of exclusively male pronouns for God has allowed us to subconsciously fall into thinking of God as primarily, if not exclusively, male.

This makes it a vital theological challenge of our day to find new ways of referring to God that do not perpetuate this unbalanced image. And it is indeed a challenge. We cannot simply refer to God as “it,” for that would undermine God’s personhood. And while certain gender-neutral personal pronouns have been proposed, such as “ze” and “zir,” they have not yet received a broad enough reception to be recognizable by most readers. One better option might be the singular “they,” but this has the potential for unnecessary confusion regarding matters of the Trinity in particular.

In truth, this challenge deserves much more than a simple blog post, and I know I won’t solve anything here. Still, knowing what I currently know, I can no longer simply default to the harmful standard of referring to God with exclusively male pronouns. So, recognizing that I have not yet come to any kind of perfect solution, what follows is a humble suggestion for how to proceed. This is the standard that I plan to follow in my future writings, at least until I discover something better.

When referring specifically to Jesus, I will use male pronouns. This seems appropriate given that in Jesus, the Word of God actually became flesh with a presumably male body. At the very least, the human Jesus certainly presented as male and accepted male pronouns, so I will continue to honor the gender identity he seems to have adopted 2,000 years ago.

When referring specifically to the Holy Spirit, I will use female pronouns. As a spirit, she is of course not actually more female than male; however, while the Greek word for “spirit” is neuter, the Hebrew word is feminine, as is the Aramaic word which Jesus most likely spoke. She also has a much more extensive history of being referred to as feminine within church tradition.

While Jesus and the Holy Spirit make for fairly straightforward decisions, it is the first person of the Trinity who presents the greatest challenge. This person is generally referred to as Father by Jesus, by the Apostles, and by the church that followed, and for good reason—the concept of God as our parent is essential. However, the first person of the Trinity is every bit as much our Mother as our Father.

Again, the historic tradition of referring to God as Father (rather than Mother) relates only to the androcentric nature of human language. Neither Jesus nor the Apostles meant to imply that God is more Father than Mother. We thus might more accurately refer to the first person of the Trinity as Mother/Father or as simply Parent.

However, I have decided that, for the most part, I will continue referring to the Father with male pronouns for one simple reason. In my writings, I rely extensively on the words of Jesus, the Apostles, the ancient church, and more recent voices, all of whom use Father terminology. To continually switch between their use of Father and my use of female pronouns, or to continually clarify that their use of Father relates equally to Mother, would simply be confusing and unnecessarily wordy. I will therefore use male pronouns with the announced disclaimer that I recognize it as a distinctly imperfect option that remains problematic.

That leaves me with two persons of the Trinity for whom I use male pronouns, and only one person for whom I use female pronouns. This is a marginal improvement over the default option of all-male pronouns, but I could do better. To bring some greater balance, I have decided to use female pronouns whenever I refer to God as God—as the Trinity without specific reference to one of the persons. Again, God is not actually more female than male, but she has been referred to as exclusively male for long enough. It’s about time that if I err, I do so in the opposite direction.

If nothing else, I hope that these choices, along with this brief explanation of the reasoning behind them, will inspire others to give greater thought to these matters. 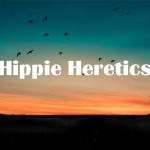 August 31, 2018 A Manifesto of Sorts for Hippie Heretics (and a New Facebook Group)
Recent Comments
0 | Leave a Comment
Browse Our Archives
Related posts from Hippie Heretic