Wednesday marked a significant point in American political history as President Trump formally announced recognition of Jerusalem as the capital of Israel and plans to move the U.S. embassy to Jerusalem from Tel Aviv. The decision is fraught with controversy as well, especially by Palestinian supporters who oppose Israeli occupation of the city.

What strikes me as a writer focused on Scripture is the enduring attention received by Jerusalem over the past 3,000 years. David first established Jerusalem as Israel’s capital during his reign, with the location becoming known as the City of David.

His son King Solomon expanded the city’s significance. Later kings lost control of Jerusalem to the Babylonians, with the city under Roman control at the time of Jesus. Yet Scripture speaks favorably of Jerusalem in three important ways.

First, Psalm 122:6 teaches God’s people to pray for the peace of Jerusalem. This advice rings true still today, as the temple mount remains the most controversial piece of real estate on the planet. Trump’s announcement regarding Jerusalem will further fuel the animosity of opponents, leading to a true need to pray for peace.

Second, Scripture predicts a glorious future for Jerusalem. In Revelation 20, the apostle John writes of a future millennial period during which Jesus will reign from his throne in Jerusalem. Prophecy scholars debate aspects of this account, yet it is clear Jesus will reign as future king in Jerusalem. The more literal understanding involves the physical return of Jesus to the literal city of Jerusalem where he will reign for 1,000 years.

Third, Scripture speaks of a new heavenly Jerusalem. The final two chapters of the Bible depict a glorious future for God’s people where the old is gone and all things are made new. There will be a new heaven, a new earth, and a new heavenly city where God’s people dwell called the new Jerusalem. Revelation 21:10-14 describes an angel with John. John writes,

Yes, this new Jerusalem will be a different city, yet the name endures. For some reason, God has chosen to bless this city in the past, present, and future.

As politicians wrestle with what this new announcement means for global markets or security, those who closely observe God’s Word recognize Jerusalem is important to God–and always will be. We live in a dynamic time when aspects of the Bible remain influential and alive in our time.

Like God’s people of old, we can pray for the peace of Jerusalem while showing God’s love to all people, seeking a future when the Messiah will reign with his people forever.

December 6, 2017
The Death (and Life) of Jesus Continues to Make Headlines
Next Post 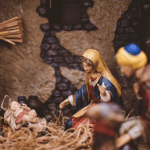 December 11, 2017 Christmas Mythbusters
Recent Comments
0 | Leave a Comment
"Congratulations!How important is the quality of your writing, e.g. neatness, and of the materials, e.g. ..."
Salvatore Anthony Luiso It’s Only Impossible Until It’s Done
"Thank you for this interesting article. I was saddened to read that King Gustavus Adolphus ..."
Salvatore Anthony Luiso The Great Bible of Mainz: The ..."
"Like the above writer I too have written out the psalms, some more often than ..."
Ivlia Vespasia Adventures in the Longest Book of ..."
"Find your second point in the New Testament for me."
toddh What Does the Bible Really Say ..."
Browse Our Archives
get the latest from
Evangelical
Sign up for our newsletter
POPULAR AT PATHEOS Evangelical
1