What Is It Like to Write Out the Bible by Hand? 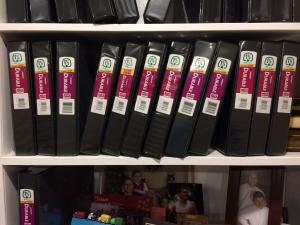 In 2013 I completed a handwritten copy of the Bible. The process took 899 days and filled  12 three-ring binders. When I finished, I wasn’t sure what would happen next. Here are some ways life has changed since.

First, I don’t look at the Bible the same. I long to read the original languages more often, including scans of early handwritten manuscripts. Since I’ve journeyed into a similar process of the scribes of old, I’ve found a deep appreciation for the works of those who have painstakingly provided our treasured copies of Old and New Testament manuscripts.

Second, I take the words of Scripture very seriously. I already had a ThM degree from Dallas Theological Seminary and even a PhD in Leadership. The last thing I ever planned was more education. However, I’m now studying toward a PhD in New Testament at the University of Aberdeen. And yes, my focus is on the study of the text of a portion of the New Testament.

The short version is that I’ve always been fascinated by the longer ending of the Gospel of Mark. It isn’t in the earliest copies we have, but it is in nearly all the copies we have. This leads to an interesting journey into how the longer ending (and actually, multiple longer endings) arose. While I’m still in the works of this project, it is clear the changes were not an attempt to mislead, but rather to reflect the fuller picture of the gospel accounts as the four Gospels began to be copied an circulate together.

Third, I live the words of the Bible differently. As a Christian I have long attempted to live what I believe. Yet writing out Scripture has forced me to focus hours of my life reflecting on each word, praying for wisdom, and meditating on the Word. This last aspect of meditating is perhaps the most difficult in my cultural context.

Life moves quickly and there is little time to reflect. Yet Psalm 1 teaches a person is blessed for meditating on the words of the Lord day and night. Writing out Scripture forces me to take this necessary time. I now meditate on God’s Word day and night and am blessed as a result.

And if you’re wondering, I am writing through the Bible again. This second time has involved many interruptions and is at a much slower pace, but I’ve completed the New Testament and am working through Job at the moment in the Old Testament.

This is not a race, at least not in the conventional sense. It it also no longer truly a “project.” It is a journey–with God and his words–as I seek to know him and live out his love among others.

This little blog, dormant for some, is my little place to reflect on what I’m writing as well as to share how Scripture interacts with issues of our time. I may also invite some friends to share thoughts as well. I encourage you to live deeply in God’s Word, live it out, and enjoy the journey with me.

September 3, 2013
It Is Finished: Thoughts on Writing Out Every Word of the Bible
Next Post

December 6, 2017 The Death (and Life) of Jesus Continues to Make Headlines
Recent Comments
0 | Leave a Comment
"Congratulations!How important is the quality of your writing, e.g. neatness, and of the materials, e.g. ..."
Salvatore Anthony Luiso It’s Only Impossible Until It’s Done
"Thank you for this interesting article. I was saddened to read that King Gustavus Adolphus ..."
Salvatore Anthony Luiso The Great Bible of Mainz: The ..."
"Like the above writer I too have written out the psalms, some more often than ..."
Ivlia Vespasia Adventures in the Longest Book of ..."
"Find your second point in the New Testament for me."
toddh What Does the Bible Really Say ..."
Browse Our Archives
Related posts from Holy Writ