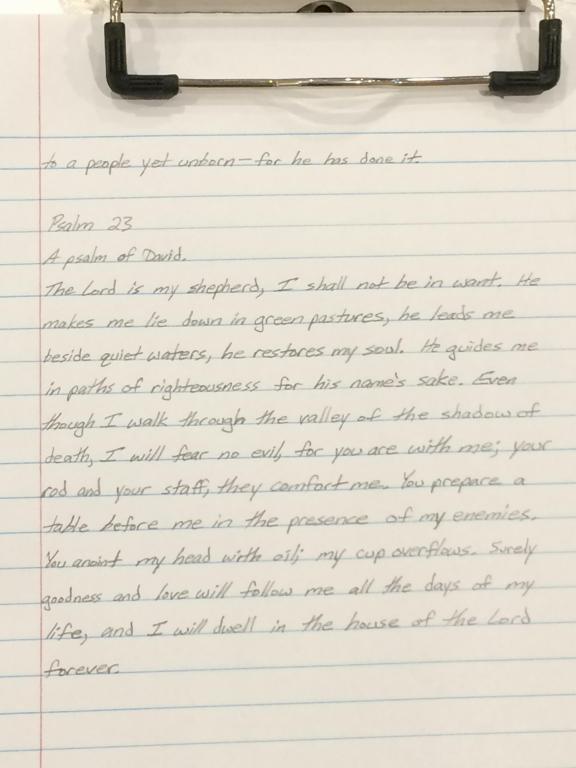 “Why?” That’s the first question I usually receive when someone discovers I handwrite Scripture. I have often given short answers about growing closer to God or knowing the Bible better, but I haven’t taken time to more seriously reflect on the reasons behind my little experiment.

As I’ve considered some of the motivations behind my handwriting of the Bible, five reasons have emerged. Now that I’m well into my second time of handwriting the entire Bible, maybe some of these words will encourage you in handwriting Scripture for yourself.

As humans, we are inherently selfish. I’ll admit, my first motivation for handwriting Scripture is to personally grow with God. After reading the Bible in a year for several years, it failed to have the same impact as when I first began.

When I considered others challenges I was also reading the classic devotional book The Imitation of Christ by Thomas a Kempis. He was one of the last European monks to handwrite the entire Bible in Latin before the dominance of the printing press.

As I read his book, I realize much of his material simply quoted or paraphrased Scripture. Why? His life was devoted to copying it.

If this practice shaped his life to the point that he penned one of the most popular devotional books of all time, what would happen if I took the time to do the same thing?

In addition to spiritual growth, I am one of those people who loves crazy goals. I’ve run 100 miles, finished a four year degree in three years, and pulled crazy stunts to finish writing projects that should not be humanly possible.

When it came to the idea of Scripture handwriting, the thought occurred to me that if it sounds absolutely ridiculous, it probably fits in my personal challenge category.

No one “needs” to handwrite Scripture, but the process can change your life. It certainly has in my case.

In South Korea, there has been a Scripture handwriting movement since the 1980s. Many older people handwrite the Bible, portions or it, or even multiple copies of it to give to their children and grandchildren.

I have three kids. My first copy will one day go to my oldest son Ben. I’m currently on my second time through that will go to my daughter Natalie. God willing, I will complete a third time for my daughter Audrey by the time she graduates in 2027.

Even if they never read it, they’ll know they had a dad who cared about them and God’s Word.

I can’t tell you the number of people who have told me my little project has encouraged them in their own spiritual life. Many older people have especially been discouraged at the direction of our culture and lack of godliness among the next generation.

I don’t claim to have it all figured out, but handwriting Scripture is at least one thing I can claim is on the right path to growing in my walk with God.

Reason 5: The Call of God

The most important reason for doing anything is the call of God. I really resisted handwriting the Bible at first. I’m the kind of guy who types everything except my signature on a receipt.

But some kind of overwhelming sense kept pushing me to try. And then to continue. And even when I’ve quit for periods of time, this same sense of presence continues to press upon me the importance of handwriting Scripture.

Just like some people know they are supposed to be an engineer or musician, I somehow know this is part of God’s plan for me. There is much I still do not know, but my goal is to remain faithful to God’s call each step of the journey.

If some of these reasons resonate with you, maybe God is leading you in a similar journey. The Bible is a big book, so don’t be overwhelmed by going from page one until the end.

Start with one verse. Then one chapter. Choose one small book of the Bible as a starting point, like 3 John or Jude. If you’re up for the challenge, you can take on the New Testament in one year like I originally did. There are 260 chapters in the New Testament, one for each weekday or five chapters per week.

If you do, please comment or message me here to join with me. The world could use more people focused on God’s Word in this ancient yet fresh way. 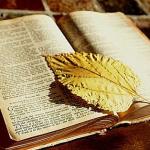 January 9, 2018
"Did God Really Say...?" Defending Against the Oldest Lie in the Book
Next Post 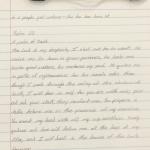 January 16, 2018 7 Benefits of Handwriting Scripture
Recent Comments
0 | Leave a Comment
"Congratulations!How important is the quality of your writing, e.g. neatness, and of the materials, e.g. ..."
Salvatore Anthony Luiso It’s Only Impossible Until It’s Done
"Thank you for this interesting article. I was saddened to read that King Gustavus Adolphus ..."
Salvatore Anthony Luiso The Great Bible of Mainz: The ..."
"Like the above writer I too have written out the psalms, some more often than ..."
Ivlia Vespasia Adventures in the Longest Book of ..."
"Find your second point in the New Testament for me."
toddh What Does the Bible Really Say ..."
Browse Our Archives
get the latest from
Evangelical
Sign up for our newsletter
POPULAR AT PATHEOS Evangelical
1