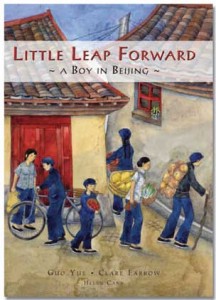 His persistent pleas reminded me of what special place those fries have in our hearts.  They were one of the few bright lights amongst the misery that marked our first year of homeschooling.  The following post, for Monday Memories, describes that early – and rare – success.

Last year, Barefoot Books came out with their first children’s novel, Little Leap Forward: A Boy in Beijing. I bought it in anticipation of our trip to China over the summer.  But as I read it to the boys, they couldn’t follow along.  There were too many cultural references that eluded them.  Frankly, I couldn’t follow it much better.

I took it out to try it again last week.

The first sentence read, When I was a little boy, I lived in an old courtyard in Beijing, China, between the Drum Tower, the Bell Tower and the river.

The boys’ eyes widened when I said Beijing and after the first sentence, they shouted, “We went to the Bell and Drum Towers!”

While we read, we got out the computer to look at our pictures of: The Drum and Bell Towers, silkworms, hutongs, Mao, courtyards, instruments with two strings, stone lions, and sloping roofs with tiles shaped like waves.

Today, in chapter 4, Little Leap Forward made fried potatoes with his sister.  When I suggested we follow the directions from the book, I got a lot of resistance.

“I hate potatoes!” and “We’re supposed to be doing schoolwork.”

But I persisted, we had a blast, and the potatoes were DELICIOUS!

Only one person cried today. (Should I just give up on handwriting?)

Here are the directions if you want to try it:

Cut up a few potatoes into “matchsticks,” and slice a few green onions (We used a leek.)

I stood back and watched my sister heating our wok on our coal stove and drizzling a little of our precious peanut oil inside… (stuff about rationing food)…When the oil was hot and beginning to smoke Swallow added some finely chopped spring onion which made a swooshing sound, followed by potato, which made a dramatic sound like a clash of cymbals.  Then came the magical bit: a tiny sprinkling of white sugar from one parcel, a few pinches of crushed rock salt from another, a drizzle of soy sauce from one bottle and dark rice vinegar from another, and finally, three drops of sesame seed oil, like liquid gold from another.  The air was filled with delicious perfume.

January 29, 2013 Mo' Money Please (And Accolades Too)
Recent Comments
0 | Leave a Comment
Browse Our Archives
get the latest from
Family
Sign up for our newsletter
POPULAR AT PATHEOS Family
1

3 Reasons a Husband Should Love...
Ashley Willis
Related posts from The Homeschool Chronicles