Everything I Need To Know About Raising Children I Could Have Learned In Obedience School October 23, 2013 Tara Edelschick 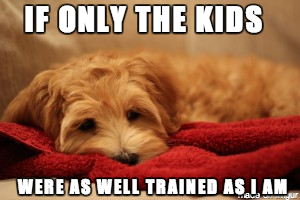 When I was having a hard time convincing my boys to quit jumping on the couches, it never occurred to me to pay a dog trainer two hundred dollars an hour to help me out.  Maybe I should have, because what I have learned from our trainer in the last year has been worth far more than the ridiculous sums of money we’ve paid her.

Don’t believe me?  Here, in no particular order, are thirteen things I wish I had known before I started training, I mean raising, our kids:

1.  You are always training.  There is no such thing as a thirty minute training session.  If you let your dog nap at your feet while you make dinner, you are teaching her that the kitchen is a fine place to nap.  It may in fact be a fine place to nap, but if you decide later that you wish she weren’t underfoot while you cook, you’re going to have undo all previous training.  Everything you allow, or don’t allow, or encourage, or discourage – whether you did it consciously or not – is a form of training.

2.  Your actions are more easily understood than your words.   If you do the hand signal for down and say sit, your dog will lie down.  In fact, when you are first teaching a skill, you should not even use words because they are meaningless until the dog has understood and responded effectively to your actions.

3.  Sometimes, no matter what you do, your darling will pee on the floor.  It’s best not to dwell on it.

4.  No one wants to be around your untrained dog.  Dogs do not naturally know how to live with human beings.  If you don’t train pup well, people will talk about you, give you dirty looks on the playground, and will stop coming over for dinner.

5.  Say it once.  After giving a command, wait a second and give your pup a chance to respond.  If he doesn’t, don’t repeat yourself a bunch of times.  That just teaches him that he doesn’t need to listen the first time.  If you don’t get a response after the first time, walk away, treat visible if possible, and ignore your trailing pup for a minute.  You’ll get a chance to try again later, and he’ll be more attentive next time.

6.  Identify high value treats.  Figure out what will motivate pup to quit chasing a squirrel; and in the early days of training, always have some of those high value treats on hand. Except on rare occasions (see #7), use those treats only for very difficult tasks.  If you can get cheese for Shake Hands why would you bother with Wait when your owner opens the door and you really want to sprint down the street?

7.  Don’t reward everything they do well, and don’t reward it the same way every time.  Treats are helpful in the beginning, and they are good reinforcers when used intermittently after a command or behavior has been learned.  But you don’t want a dog who will only obey you when she sees a treat in your hand.

8.  When there are other dogs around, it’s play time for dogs.  Stay out of the way, and let him learn how to play with other dogs.  You can show off how smart and talented he is when you are at home.  At the park, let him sniff other dogs’ butts.

9.  Consistency.  This is another way of saying #1, but it bears repeating.  You can’t allow them on the couch just this once. And you can’t expect them to always relieve themselves in the same place at the back of the yard if you occasionally stop to let them do their business in the front yard..

10.  Don’t move on to the next skill until you would bet money that they will do the foundational skill perfectly.  There is no rush.  Really.  Teach each skill well before moving on.  The last thing you want is a pup who knows how to do everything slightly wrong.  It’s much harder to correct the mistake after they have practiced doing it wrong ten times.

11.  Don’t over-reassure your pup.  A constant barrage of assurance makes your pup more anxious.  They don’t need to hear, “It’s okay, puppy.  That’s just a vacuum cleaner.  Come here and let me hold you.  That’s just a loud, scary noise, but everything is okay, puppy.”  All of that reassurance sends the signal that there really is something to fear.  Instead, it’s better to put some peanut butter closer and closer to the running vacuum and let them figure out on their own that the vacuum cleaner is not going to hurt them.

12.  Brush them every day.  No one likes a dirty dog with matted hair.  Plus, the act of holding her closely and grooming her helps build trust and intimacy.  Works for gorillas, cats, and babies.

13.  Your pup want to please you.  Use that.  No matter how badly you screw things up, your pup loves you.  And she’ll give you lots of chances to get it right.  So keep trying to get it right.  She – and your neighbors – deserve it.