The Year My Dad Died, Jeff’s Hair Fell Out, And We Stopped Having Sex

The Year My Dad Died, Jeff’s Hair Fell Out, And We Stopped Having Sex October 16, 2013 Tara Edelschick

Okay, that wasn’t the most accurate of titles.  Here’s what it should have said:

This was the year my dad died, my faith took a hit on the chin, I gained twenty pounds (or twenty more pounds, depending on how you think of it), Jeff’s hair fell out, his testosterone plummeted, and we stopped having sex as often as we have committed to (which is twice a week).

But if you are going for pithy little titles, that’s not gonna work is it?

Whatever you call it, as far as years go, this one has been a crapfest.

It’s not that there hasn’t been laughter and tenderness and growth.  There has been, of course, because unless you slip into a clinical depression or are unsure of your survival, misery rarely blocks out joy entirely.  Which is another way of saying that Goodness abounds.

My dad died last November, and I can’t stand it.  I relive the last awful moments of his life once or twice a day, hoping I can get him to hang on just a little longer so I can tell him again what a great daddy he was.  I want to call him several times a day to tell him something the kids did or to ask him what he thinks about the latest news.  I want him to put his arms around me or tell me a disgusting joke.  I just can’t stand that he’s not here anymore.  I’ve been through this before, when my first husband and baby died.  I know that death sucks. But I can’t seem to reconcile myself to a world without my beloved father.

And this happened: I stopped praying.  I mean, not entirely.  I still throw up little prayers, mostly along the lines of Please, please, please.  Perhaps it’s more accurate to say that I stopped expecting God to answer.  In the days after my dad died, I begged God to show me that he was real.  But I got nothing, and I’m still mad about it.

Now I’m not one of those people whose faith falls apart when they realize that bad stuff happens.  I came to faith in the middle of bad stuff, so I never had any illusions that God was like Santa Claus, handing out goodies to good girls and boys.  Whenever I hear people ask, “How could God have let this happen to me?” I want to respond, “The same way he ‘let it happen’ to the thousand kids who died from malnutrition yesterday.  The same way he is ‘letting it happen’ to the little girl being raped in a filthy brothel as we speak. Did you not know that the world is horribly, horribly broken before this?  Or did you just not care?”

So I’m not mad that God did not keep my dad alive.  I’m mad that when my dad died, I felt none of the comfort God promises the brokenhearted.  Even when I pleaded for it.

Three weeks after my dad died, all of Jeff’s hair fell out.  Perhaps it’s more accurate to say that he still has eyebrows, but it doesn’t feel more accurate.  It feels beside the point.

But it’s hard to have sex when you are crying because your dad died, and you are trying holding in your stomach because you think that maybe if you do your husband won’t notice how much weight you’ve gained (which of course he has), and you feel weird because you are hairless and you’re wondering if it creeps out your wife (which of course it does), and everyone is grumpy.  And God is seemingly absent.

See what I mean about a crapfest?

During years like this, it’s a good thing that I got up in front of all our family and friends and God and promised to stay married “in the sunlight and in the darkness.”  Because there were moments, and even days, when I wanted to tell Jeff to pack up and leave.  It’s not that I thought our problems were entirely his fault; I was being as miserable as he was.  It’s just that I really wanted to move at least some of the misery out of the house.

But I had promised to stay.  And I love him.  And he can still make me laugh.  And when he is sleeping – and not talking – I still find him irresistibly beautiful. And he gets up and makes oatmeal for the boys every day and drives Nafisa to school when she is tired.  And I had promised.

During a year like this, it’s good that I have immersed myself in the disciplines of the people of God.  We celebrated Advent, just like every year, but this year it reminded me that waiting for Jesus “exposes the ugliness of death in all it’s horror.  And then it fixes our eyes on the beauty that will one day defeat it.” I went to my prayer group every other Wednesday, and they prayed for me when I had no desire to pray.  And they reminded me to be kind and respectful to Jeff when I didn’t want to.  And we were part of our church’s marriage ministry team, which meant that I had to focus on the promise of marriage when I most needed that promise to be true.  And Jeff and I had developed a Rule of Life, which included having sex twice a week.  We didn’t follow the rule as well as we should have, but without it I think we could have gone months without sex.  And we read the Bible and prayed with our children, which were virtually the only times I read the Bible or prayed all year.  These disciplines kept me rooted in my marriage and in my faith when my desire to do so was weak.

During a year like this, it’s a good thing I troll the internet looking for solutions to all my problems.  I stumbled upon an article about grumpy old men.  “Maybe part of your problem is low testosterone,” I suggested to Jeff.

Sure enough, his testosterone was below the lower limit of normal, and his doctor told him it might be caused by a lack of sleep.   Jeff has never slept enough, but he slept even less this year. When life at home is tough, it’s easy to work late into the night.  So the doc told him to get three nights of sleep and come back for a retest.  Three days later, his levels were right where they were supposed to be and he wasn’t grumpy.

The year my dad died is coming to a close, and I wish I could say that everything is back to normal.  But it isn’t.  I’m still crushed about my dad, and mad at God, and overweight.  And Jeff still has no hair, and doesn’t alway get the sleep he needs even when he sees how much it helps.  And on a rare day, I still wish he would leave.  But everything is a little less miserable than it was six months ago.

And I can see, when I’m not too stubborn to admit it, that God has been speaking to me.  Like when Jeff doesn’t escalate things when I tell him that I fantasize about him not coming home.  He just smiles and says, “I’m sure you do,” and I am grateful for his steadfastness.  Like when the kids in Sunday School tell me about how God answered the prayer I had taught them.  For weeks, we prayed Maranatha (Come, Lord) in class, and all of the kids had used it when they were scared or nervous.  All of them, and he came to all of them. And I am grateful for their trust. Like two days ago, when I read this verse in I Timothy:

So I counsel younger widows to marry, to have children, to manage their homes and to give the enemy no opportunity for slander.

Which reminds me how grateful I am to have my family, with whom I can share this miserable year.  Which is another way of saying Goodness abounds.  Which may, in the end, be what this post is about after all. 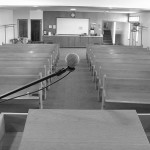 October 20, 2013 Giving Testimony To The Truth Of Our Lives
Recent Comments
0 | Leave a Comment
Browse Our Archives
get the latest from
Family
Sign up for our newsletter
POPULAR AT PATHEOS Family
1

Family
Boston Is A Small World
The Homeschool Chronicles

Family
A Season Of Longing
The Homeschool Chronicles