Jeff and I took Ezra out for dinner tonight to have a state-of-the-boy talk.  Pizza, gelato, and lots of focused on attention from your parents.  What’s not to love?

We talked about school, friendships, faith, family, and school.  When I asked him how he thought school was going this year, he said, “I’d say it’s the best year yet.”

That’s the number of kids who come over on Monday’s to take classes in our house.  Mondays are Zach’s and Ezra’s favorite homeschool days.  It probably wouldn’t matter what we did together.  They like the Humanities and Spanish classes, but they love the thirty minute break after class.  They really, really love the several hours after class where kids hang out, have lunch, play football, and make art and play Pokemon.

Many, but not all, of the kids in our class left in part because they were being bullied.  Others had teachers who made them feel stupid.  Not all schools or classrooms or teachers have negative effects on kids.  I taught public school of eight years, and I’d like to think we created nurturing classroom communities that made learning and growth possible. That wasn’t the case where my boys were in school, and so we left.

Both of my boys had fights today with boys over a football game.  But because we are small enough to address problems, and because we won’t tolerate rotten behavior toward one another, the problem was solved and the boys continued to play happily – without adult help in this case.  Kids who were afraid to show their work before, now receive encouragement and authentic praise from their peers.

I often say that I care more about the boys’ character than their academics.  We spent three hours in class today with teachers who work hard to create kind, supportive learning environments.  And then we spent four hours playing with kind, quirky kids.  I love that the boys’ characters are being shaped by this bunch of kids and their families.

So no, I’m not worried about their socialization.  Some days, in fact, I’m in awe of it. 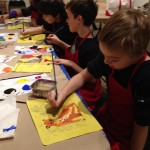 January 15, 2014 Day 9: Your Best Work
Recent Comments
0 | Leave a Comment
Browse Our Archives
get the latest from
Family
Sign up for our newsletter
POPULAR AT PATHEOS Family
1

8 Signs that SHE REALLY LOVES...
Ashley Willis
Related posts from The Homeschool Chronicles