My Debt to Lowell Bennion 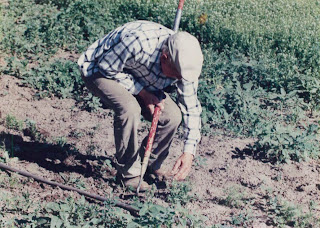 In the last few months I have had the privilege of meeting two sons of Lowell Bennion, a man who had a stronger influence on the way that I think (and hopefully someday act!) as a Mormon than anyone else. On the occasion of both of these encounters, I felt overwhelmed with feelings of tenderness and nostalgia for their father perhaps because they held such a close physical resemblance to him but also because they were living out their lives in ways consistent with who he was. I believe that Lowell Bennion was both the best humanitarian and the wisest intellectual the LDS church has ever produced. Sadly, he seems virtually unknown among the younger generations of the church and his many books are all, as far as I can tell, out of print.

Lowell Bennion was the founding director of the first LDS Institute in the LDS church, at the University of Utah, and was instrumental over the course several decades in shaping the educational culture for LDS youth, writing many books on his own as well as manuals for the church. Early on, he sensed that college-age youth in the church needed guidance in their search for understanding, especially in their quest to integrate faith and intellect. He was concerned too about the rise of selfishness in American culture and the tendency for young people to evolve into self-obsessed, narrowly focused adults who only concerned themselves about their own lives and well-being and not that of others, who pursued material well-being for its own sake and who luxuriated in idle pursuits at the expense of the health of the larger society. He was not afraid to ask tough questions of others and even of his church leaders, some of whom were close acquaintances, whenever he saw contradiction, as he did, for example, about the church’s priesthood ban of black members at the time, or when he heard people defending life at the same time that they defended capital punishment or the accumulation of nuclear weapons. He balanced religious commitment with intellectual honesty better than most anyone I have ever known.

He called himself a liberal but mostly in the sense that Christ was a liberal, that is, as a selfless, generous, and compassionate person. He believed that cultivating the capacity to be generous to the poor, to refrain from judging others, and to be merciful were paramount virtues of the Christian life. He worried about the tendency to place concerns for one’s salvation ahead of the higher purpose of the Christian life, which is to learn to love service and selfless giving for its own sake, as the deepest and most sincere desire of the heart. He cared not one whit about heavenly rewards and only imagined himself in the next life working hard, quietly serving, persistently relieving suffering, and gently teaching. This is because that is who he had become in this life. When he died in 1996 after wearing himself and all of his possessions out in a very long life of service, President Gordon B. Hinckley, the President of the LDS church at the time and his former neighbor, commented at his funeral that he had seen a lot of cars in the church parking lot that day that Lowell Bennion would have never driven. He never made a show of a kind of principled vow of poverty; it just wasn’t in him to own things that were unnecessarily expensive or luxurious. He believed that things were only of value to the degree that they were functional, beautiful, and well made. He was not afraid to suggest that people ought not to own homes and cars that were too big and too expensive because he knew how much these things distract us from our deeper purposes. He lived in a simple home, wore simple clothes, and was never above grabbing a garden tool or a hammer and rolling up his sleeves to do what needed to be done. He did his best teaching working side by side with others. 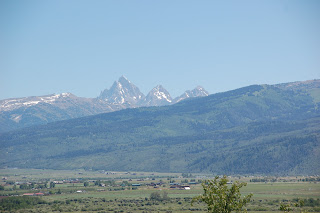 At considerable expense to himself, he started a Boys Ranch in Idaho to help provide boys a chance to learn to work hard. In the 1970s, I joined this camp as a boy for two summers, in the Teton Valley of southeastern Idaho, and then later in 1983 and 1984 I worked as a counselor for him in my late teens. I have never tried to write about those years, and perhaps someday I will, but they were among the most important experiences of my young life. He took me in as a counselor the summer after my oldest brother had committed suicide. He didn’t make a big deal of this, but he was always sure to find a moment alone with me to talk about it. He probably also knew that the experience itself of working with saws and hammers, working in the garden, painting widows’ houses in the valley, and hiking, fishing, and camping with boys to help them have a meaningful experience, were enough to heal my soul. It didn’t hurt that all of this took place in one of the most beautiful places in this country that I have ever seen and among some of the finest people my age I have ever had the privilege of knowing. We all loved him, called him “Doc,” and spent hours talking about his ideas. Indeed, I think I speak for all of us in saying we have spent the better part of the rest of our lives trying to come to terms with and to live up to his legacy.

I loved his many books. They were, like his life, simple, to the point, and wise. But it was because he was a model humanitarian, a man fully devoted to higher principles of living, that his gentle and committed intellect was most impressive to me. He taught more by example than by words, so when he did teach by words, they sunk deep into the heart. At the conclusion of the first summer, he sent me my modest pay check, and in the envelope, he left a small note that simply said: “Keep up your lusts for the fine things in life.” With one simple phrase, he was reminding me not to live for my body but for my mind and spirit and for others. He was perhaps also gently encouraging what he could see was a budding passion for things that mattered. The truth is I was barely emerging from the fog of a somewhat poorly spent youth, one spent largely without discipline or direction in pursuit of my own vanity and pleasure. And I was just beginning to discover the world of ideas, of great literature and theology, and to find what kind of mission I might give my life. He taught me to care more for doing what was right than for whatever blessings, consequences, or honors it might bring me. He taught me I had no right to believe that the good I might do in the world, in the end, had any more to do with me than with others. We are interdependent with each other and with God, and a principled life of integrity lived on behalf of others is the only possession we can obtain in life. Everything else, it seems, is dross.

Here, in his words, is a brief summary of what he taught and lived by:

Learn to like people, even though some of them may be different…different from you.

Learn to like to work and enjoy the satisfaction doing your job as well as it can be done.

Learn to like the song of birds, the companionship of dogs.

Learn to like gardening, puttering around the house, and fixing things.

Learn to like the sunrise and sunset, the beating of rain on the roof and windows, and the gentle fall of snow on a winter day.

Learn to keep your wants simple and refuse to be controlled by the likes and dislikes of others.

June 1, 2012
"You are everything you feel beside the river"
Next Post

June 7, 2012 Lessons from Doc: #1 “Learn to Like What Doesn’t Cost Much”
Recent Comments
0 | Leave a Comment
Browse Our Archives
Related posts from Home Waters