The Hope of Stewardship: A Review of Joseph Spencer’s For Zion: A Mormon Theology of Hope 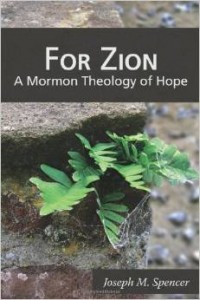 There are those who are infected by nostalgia and yearn for a nineteenth-century Mormonism because, I suppose, they imagine that the prophets then seemed more willing to condemn capitalism or to preach environmental stewardship and that Mormons were more communitarian, less materialistic, and more obligated under the law of consecration to work to eliminate poverty. And there are others who are disgusted with the wickedness of this world and pine for the world to come, a time when poverty, crime, wickedness, injustice and inequality will finally be done away with because our hearts will finally be knit as one. In either case, it seems that the assumption is that the gospel in its full force is not operable in the present. What Joseph Spencer’s book, For Zion: A Mormon Theology of Hope (Greg Kofford Books 2014) makes evidently clear is that neither assumption is entirely correct, or at least neither is very useful for us in the present. They may, in fact, be ways in which we train ourselves to avoid the obligations and hard work of building Zion here and now. As he writes, “We displace the force of the law of consecration into the irretrievable past or the indefinite future precisely so that we do not have to take up the difficult work the law prescribes for us right now” (145).* And what is that work?

Spencer makes it clear throughout the book and then summarizes in the concluding chapters that the work is essentially two-fold: we are to learn to give up our excess so as to allow a more equitable distribution of the earth’s resources so that the poor may improve their lives, and we are to remain stewards, not owners, of that which remains in our temporary possession and to determine God’s purposes for how we ought to use these resources. While not specific to our individual lives, these principles are certainly clear. We know, as we learn in D&C 42:20, that “it is not given that one man should possess that which is above another, wherefore the world lieth in sin.” Inequality, in other words, is a symptom of our sinfulness. This verse implies that we all bear responsibility for inequality, and righteousness is demonstrated not so much by exactness in obedience as it is by generous consecration.

But we tend to imagine this commitment as either historical or millennial but not for us now, in part because it inspires so much “fear and trembling” as Spencer notes to do the hard work of sifting through our wants and needs and facing up to the facts regarding the world’s poor (145). And what are some of those facts? For one, over a billion people in the world do not have access to clean drinking water. Twenty to twenty-five million people die a year of starvation. Our current rate of consumption of the earth’s resources per capita in the United States is currently about five times that of the average Mexican, ten times more than the average Chinese and thirty times than the average Indian. Although less than 5% of the world’s population, we consume close to 25% of the earth’s fossil fuels currently being used. If everyone on the planet consumed as wastefully as we do in the United States, we would need at least four earths to provide the resources needed.

Perhaps you have already heard these kinds of statistics. They stick in our craw. Some might want to argue over them, but the bottom line is that we don’t like this kind of news. We prefer a theology of the status quo, as Spencer implies, so that we can pine for the days of yesteryear or for the paradise of tomorrow. And we prefer to think of the earth and its resources as things to be used rather than as gifts to be distributed. The world, we think, is full of things and things are what we buy, sell, and possess, but as Spencer puts it, “[s]tewardly use is that which one puts things to when every compromising instrumentality has been replaced with an eye single to the glory of God” (153).

One symptom of our failure as stewards of the earth is our tendency to think of stewardship as merely a question of financial responsibility. We talk of stewardship in the church as if it only pertained to cash, as if cash were not merely a symbol of the earth’s flesh, which flesh we are strongly warned not to waste. If Marx was right to be concerned about how capitalism hides the history of labor in the buying and selling of products, the gospel teaches additional reasons for worry: buying and selling hides the biological story of bodies, the bodies of people, animals, plants, of the earth itself. In D&C 49:21, the Lord says “And wo be unto man that sheddeth blood or wasteth flesh and hath no need.” Sure, wasting cash is a folly, but it is the waste of flesh, of living matter, that really should concern us in our Sunday deliberations. It is what cash stands in for, in other words, that is our stewardship, and when it comes down to it, it stands in for the power of the sun and all of its marvelous and diverse fruits. As Spencer notes, “According to Paul, hope is called for because human beings have attempted to capture God’s overabundant creation within the limits of economy alone. Economizing God’s glory, they have reduced every grace of the earth to an image, a commodity that can be circulated on the market in order to turn a profit” (156).

Hope seems like a fragile thing, really, especially in light of the enormity of our tasks. While we hold tightly to our things in the hope that we can worry about fairness later, Spencer teaches a harder and truer doctrine of hope. Hope is what rises in the face of the seemingly impossible, not that which denies reality. The impossible, he goes so far to say, is the “bread and butter” of hope. It might be true that we cannot stop poverty or suffering or environmental waste, least of all individually, but our charge is to live in the hope of the world’s transformation and such hope must begin by facing up to the facts of our impact on others and on the earth and by assuming responsibility. If repentance is an honest acknowledgement of failure in the past, it is also a hopeful turn to live better in the present, what Spencer describes as “full trust in the word of promise (147). In other words, what Spencer’s book drives home (and is all the reason for reading this remarkable book) is the invaluable insight that our hope in the future transformation of the world is made most evident in our loving answerability for its present circumstances.

*It is certainly clear that much of what Spencer argues about stewardship is consistent with what the church’s new website about stewardship teaches, including especially Elder Marcus Nash’s marvelous talk which links environmental stewardship with concern for the poor. See https://www.lds.org/topics/environmental-stewardship-and-conservation?lang=eng