Theology, Ecology, and the Word: Notes from Halki Summit, Part I

I have arrived this week for the Halki Summit II, a meeting co-sponsored by the Patriarch Bartholomew and Southern New Hampshire University at the island of Halki off of the coast of Istanbul. The topic of the summit is “Theology, Ecology, and the Word: A Conversation on the Environment, Literature, and the Arts.” You can read more about the summit here. I intend to provide some observations about it as I attend. 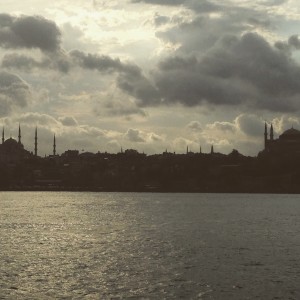 Much of my writing on this blog has been devoted to the intersection between religion, literature, and the environment, and I am currently working on a book that seeks to understand the ecotheological insights of a variety of authors from the 20th and 21st centuries. I have never thought of religion, science, and the humanities as separate spheres. I think it behooves any religious person to find ways to integrate, rather than to separate, different forms of knowledge. To put it in the simplest of terms, I would say that this work, and this summit, is about assessing the extent of the environmental crisis and then seeking to understand where our greatest sources of wisdom and inspiration might come from to assist us in meeting the demands of the crisis. To ignore religion in this quest or to ignore the ways in which the arts and religion can work together to move and shape us is to lose out on our most valuable sources of inspiration. Facts alone do not move us. The reality of environmental degradation and our relationship to it must be woven into the stories we tell and the arts we create in order to understand ourselves and our role in this world. The fact is, the story of the earth is already deeply woven into all religions and virtually all of the arts, but we have not had the eyes to see nor the ears to hear. As the Patriarch Bartholomew says on the conference website, “We fervently believe that any chance of reversing climate change and the depletion of the earth’s resources requires first and foremost a radical change in values and beliefs in order that people can include the ethical and spiritual dimension of environmental sustainability in their lives and practices.” It is deeply moving to me that he has the visionary understanding that the arts and religion must be seen as complimentary to one another to help in this transformation. Too much is at stake, so the time is ripe for finding common ground, rather than falling back into separate sectarian, partisan, or disciplinary camps.

Most environmentalists (and even many of environmentalism’s detractors) rather incorrectly assume that environmentalism is essentially a secular movement that has nothing to do with religion, or that if it does, it is a new embrace of older pagan and non-Western forms of religious practice. This is because it is believed, again against much evidence, that Christianity and environmental stewardship are somehow at odds with one another. I insist on this being a false perception of Christianity because of the history of environmentalism itself and its profound indebtedness to Christian thought (a relationship which is very well documented in David Stoll’s recent and fascinating history of the religious origins of environmentalism, Inherit the Holy Mountain—highly recommended reading). I also say this because of the decades-long work of many religious communities today, both within Christianity and in many of the other world religions, to act on behalf of shoring up the health of the planet. Certainly the Patriarch Bartholomew, the leader of over 300 million Orthodox Christians, has been at the forefront of this effort, making it clear that environmental degradation is a form of sin because it is a profound neglect and disregard for God’s creations. Such degradation is a symptom of our greed, indifference, and pride. You can read about his considerable efforts to preach a return to greater effort and stewardship of the Creation here. Later this month, Pope Francis will be releasing his encyclical about climate change and the environment. As I have noted earlier, the LDS Church has recently created a page in the online Gospel Library devoted to conservation and stewardship. Unfortunately this important work gets overshadowed in the news by our obsession with polarizing social issues. I wish more of my fellow Mormons understood stewardship as a natural extension of their belief rather than as some political agenda you either like or don’t like.

I grow tired of being considered an “environmentalist” or of being seen as someone with a pet theme that I am trying to impose on others. I certainly don’t relish such a role. I guess I have a hard time understanding why it is not more obvious to everyone that the environment is not some specialized interest or concern, either academically or religiously. It concerns every single one of us, and it pertains to our most deeply held beliefs, whatever they might be. It’s really quite simple: whatever passions, dreams, ambitions or hopes we might have for ourselves and for others cannot be realized in a world that is increasingly degraded, polluted, or otherwise compromised in its basic integrity and health. This would suggest simply that such dreams and ambitions should include, rather than ignore or be indifferent to, the well-being of the planet. Most of the world’s greatest artistic minds have certainly understood this, as has every single one of the world’s religions.

March 22, 2015
The Hope of Stewardship: A Review of Joseph Spencer's For Zion: A Mormon Theology of Hope
Next Post