I have a few things to report that deserve commentary from the Halki Summit II co-sponsored by the Ecumenical Patriarch Bartholomew of the Orthodox Church and Southern New Hampshire University. It is an extraordinary privilege to be a part of these conversations.

What kicked it off were two brief speeches, first by the Patriarch himself and then by his chief environmental advisor, Father John Chrissavgiss. In both cases, what they called for was a happier marriage between religion, science, and the arts. The goal is to find means of raising awareness and heightening motivation to address the environmental crisis and climate change most specifically. On this point the Patriarch called for assistance from artists and critics: “We feel quite comfortable with art; we are very much at home with color and music. Therefore, we believe that you, prominent speakers and precious participants, can assist the world to discern and relearn this vocabulary of art through poetry and literature, through film and sculpture, and through the culture and cuisine of food. We know this because we look to you as images of divine creativity and godly compassion, as reflections of divine imagination and holy innovation. How unfortunate that theology seldom includes poetry or that politics is often void of art. Our plea and prayer for the world is that people may learn to see with the eyes of the photographer, to hear with the ears of the composer, to touch with the hands of the sculptor, to taste with the palate of the hungry child, and to smell the way a bee is attracted to the flower.”

These are stirring words. I love the idea of “holy innovation,” that God is a motivator of creativity, that he is indeed expressed through imagination. We are more spiritually attuned when we are more responsive to the senses, when we strive, like the novelist that Henry James once described who is someone on whom nothing is lost. Father John connected the ambition of the arts to the ambition of religion, that is to act with what Paul calls charity. Father John said: “both [religion and art] express and both profess the deep-seeded nostalgia and at the same time yearning for ‘whatever is true and honorable, whatever is just and pure, whatever is beautiful and grace-filled’ (Philippians 4.8).” And this love of all that is good and beautiful, of course, makes us more sensitive and responsive to the fate of the physical world. 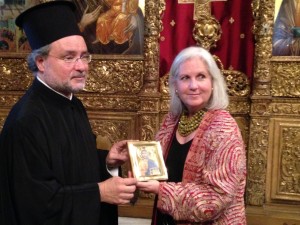 It is an unusual situation, to be sure, to watch an international religious leader spearhead such a conversation out of a profound moral concern for the reality and root causes of climate change. It may prove less unusual after June 18, when Pope Francis will release his encyclical about climate change. Climate change deserves moral attention, not partisan or ideological posturing. I say this because its root causes are based on greed, overconsumption, and stubbornness to innovate and change, and because its consequences are disproportionately suffered by the poor. So it makes perfect sense that believers of all kinds who care deeply about God’s creation would find inspiration from their respective religions to respond and that leaders such as the Ecumenical Patriarch Bartholomew and Pope Francis seek to use their authority to wake up their members to this new moral problem. The Patriarch noted, “For, if we are honest with ourselves, we must admit that far too little has been achieved in terms of people reviewing and reforming their ways, repenting for their destructive impact on the planet and transforming their lifestyle to tread more lightly on God’s creation.”

There are a great deal of issues of concern in the world today and a lot of energy has been spent in the Mormon community over issues of relevance to us and our families. These are not unimportant issues and people have strong and often different opinions on such issues as gay marriage and gay rights, religious freedom, the role of women, and Mormon history and theology. But I think we are too concerned about getting people to agree with our point of view, with arguing over ideas and not concerned enough about building and sustaining communities where all people and all life can flourish. There are over a billion people in extreme poverty. And species are going extinct at unprecedented rates and the climate is warming and heading to disaster. This is not to mention human trafficking and sex slavery that are happening on extraordinary scales all over the globe. So I hope that in all of the energy we expend on issues that matter to us, we save some of that energy for trying to solve the problems of our planet. Who knows, we might even find ourselves fighting with one another less often. I say this because this kind of work requires building coalitions and working across cultures. I do not say any of this to disparage my many good friends who have very strong feelings about these issues nor do I mean to suggest that these issues don’t matter, but I do wish the Mormon commitment to and passion for global problems was more evident.

Mormon belief, it turns out, was not irrelevant to the very first presentation of the day. Terry Tempest Williams, whose environmentalism both stems from and is a reaction to her contemporary Mormon context, spoke the first morning. I can’t quite explain how surreal it was to watch the audience listening to stories of the environmental problems in Utah about which Terry has been such an exceptionally important voice. What was especially interesting to me was that Terry insisted on sharing the stage with one of her students in the Environmental Humanities program at the University of Utah, Alisha Anderson. It said as much about Terry as it did about Alisha that she would have insisted on sharing the stage at such a venue with a student. Terry clearly feels that she has found something special in Alisha and Alisha proved worthy of that trust. Alisha spoke and then showed a film that she had made about her art that mourns the loss of the Oquirrh mountains in Salt Lake Valley. This is the mountain range that has all but disappeared due to Rio Tinto’s copper mine. It was deeply moving. You can watch it here. I can’t say enough good about this film. It is a literary and visual masterpiece and its tone and approach are also masterful. This is environmental art that can teach and inspire many. Many in the international audience were moved to tears, and what was particularly moving to me was knowing that it stems from the convictions of a devout Mormon woman and graduate of Brigham Young University. Terry, of course, knew that Alisha would inspire, and it signaled the possibility of the next generation coming on board with their energy, genius, and wisdom. I know that Alisha represents many young Mormons I know, many of them women as well, who are unusually capable and ready to rise to the occasion of making important contributions to solving the problems we face. I told Alisha, as I do my own students frequently, especially those who seemed touched by a special passion for the environment, that she should follow her passions, magnify her calling, as it were, by building on and expressing her talents, and that she should refuse to allow self-doubt or the occasional raised eyebrows she might get from her fellow members to discourage her.

This is no time to play small, to hide one’s gifts, or to apologize for one’s compassion for God’s creation.

June 8, 2015
Theology, Ecology, and the Word: Notes from Halki Summit, Part I
Next Post

June 16, 2015 Theology, Ecology, and the Word: Notes from Halki Summit, Part III
Recent Comments
0 | Leave a Comment
"Watch, the hour is nigh ( Mark 13). The disciples are commanded to watch, for ..."
Hunter Perreira Obedience as Gratitude
"sounds to me like agenda 21 mixed with mormon doctrine......so what is being taught here......philosophies ..."
Sean Shafer Environmental Stewardship and Mormon Belief
"Thank you for sharing this beautiful, thoughtful article! Understanding that I don't have to earn ..."
Teresa Jones Obedience as Gratitude
"George, this is your old friend, Gary from MP a long time ago.I like your ..."
outdoorsguy On Disagreements at Church
Browse Our Archives
Related posts from Home Waters