So, here’s a provocative thesis: what we typically call “the Sexual Revolution” isn’t a revolution at all, but instead a reaction, in the political sense, meaning an attempt to turn back the clock back to paganism.

Christianity effected a revolution in the Ancient world, particularly in the domain of sexuality.

I think the best way to get at this is to remember the Catholic Oscar Wilde’s quote: “Everything is about sex, except sex. Sex is about power.”

In the Ancient world, it was simply taken for granted that sex was about power. The social order was defined by a hierarchy of concentric circles. At the center, the free, male, citizen, and then in concentric circles, women, freedmen, foreigners, children, and so on. The main paradigm for sex was not heterosexual/homosexual, married/unmarried, even reproductive/non-reproductive, it was active/passive or dominant/submissive, and the main taboo was for someone who was supposed to be “active” to be “passive”.

This is why sexual slavery (particularly of children) was not frowned upon, and neither was homosexuality as long as it involved an older man and a younger man so that it was clear that the relationship had an “active” and a “passive” participant. Heterosexual marriage was also perfectly understood, since women were of a lower social status than men.

It’s worth dwelling for a second on the world that these beliefs created. The practice of expositio, the exposing of infants, was widespread and unproblematic, since children were of lower status than adults. And the extant sources we have concur: the typical fate of exposed infants was either death or ‘adoption’ into slavery, which was typically sexual slavery since that was the most profitable use for a child. Brothels specializing in child sex slaves were established, legal businesses; the majority, it seems, specializing in boy sex slaves. Sources describe sex with castrated slaves as particularly exciting, and sources report that babies were sometimes castrated so that they could work in brothels later on. Pagan apologists roundly mocked the early Christians for not only not practicing expositio (an echo of which can be found in anti-Catholic Protestant polemics against teeming mackerel-snapping families) but rescuing exposed infants and adopting them.

Sex is always about power, about domination. And that can be exciting. (Don’t lie.) But Christianity came on the scene proclaiming a very different ethic: Paul described marital relations as an allegory of the relationship between Christ and the Church, a relationship which was, of course, one of self-giving unto death. In a civilization that was all about power, Christianity proclaimed the end of power. Sex was endowed with a heightened sacred dimension, which meant that it could only be done under certain circumstances, precisely because it was not about power but about self-gift, just like Christ was the King who had won his victory through death on a Cross.

On the Christian reading, this facet of sexuality is very easily understandable: the urge to dominate and to “lord it over” is the sinful urge, the root of Adam’s sin, and it is not surprising that it would be such an important aspect of a central facet of our lives such as sexuality. In the classical Christian reading, sin does not exist as such, but is instead a lack or a corruption of the good. Sexuality is good, but because of sin must be disciplined and purified into a form of Christlike self-gift, whether through abstinence or through marital (reproductive) sex.

And it is not surprising that both the Old Testament and the Pauline epistles link paganism, idolatry and sexual perversion so closely. Not just because of extant historical practices of things like sacred prostitution, but because the pagan world is one where “everything is about sex, except sex which is about power.” The pagan order is the order of fractal domination: man over woman, freeborn over slave, citizen over foreigner, dominant sexual partner over submissive sexual partner. Pagan sexuality leads to a pagan worldview leads to a pagan culture and vice versa.

All of which is a long-winded way of saying: “Hey! Did you notice 50 Shades of Grey is a cultural phenomenon?”

Humans gonna human. Just like in the economic realm, if you get rid of all rules, what will happen is not a flowering of utopia; instead what will happen will be that the strong will lord it over the weak. And sexual domination is linked to social domination: notice how state school libertinism helps entrench social stratification.

This highlights the possibility that what we’re witnessing is not a sexual “revolution” at all but instead a sexual reaction: the return of the Bourbons who want to overturn the Christian sexual revolution and return to the good old days of paganism. (In this regard, social conservatives crowing that 50 Shades is “complementarian” are obviously and disastrously missing the boat.)

Now, most our current “revolutionaries” are actually repulsed by the abusive character of 50 Shades and other facets of current sexual mores. Then again, most of the takers of the Tennis Court Oath were horrified by the Committee of Public Safety, but some genies are very hard to bottle up again.

To be clear, I don’t want to take this analogy too far. I present it as a provocation.

For starters, reliable artificial contraception really has changed things–this does represent a real “revolution”. Secondly, while a lot of our practice may be pagan, that is not the only thing that is going on. The fact that Oscar Wilde, in the 19th century, could still talk about sex being about power shows how little “Christendom” really was baptized. A recovery of an authentic Christian sexual ethic will involve creativity (such as the “New Feminism” called for by John Paul II) and not a return to some prelapsarian state.

After all, we’re the true revolutionaries. 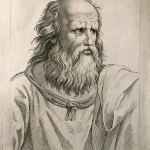 February 10, 2015
Iris Murdoch and the Death of Philosophy
Next Post

February 11, 2015 Housekeeping Note
Recent Comments
0 | Leave a Comment
"https://en.wikipedia.org/wi..."
pgtipsster The Best Defense Is A Good ..."
"The point that leapt out at me from this post is the complaint that atheists ..."
Bob Seidensticker The Amazing Incuriosity Of The New ..."
"I'm glad to see the atheist reaction against New Atheism becoming more widespread. Although it's ..."
Steven Bollinger David Hume Against The New Atheism
"Which may indicate you don't actually know the Gospel. Tell me: if you died and ..."
Andy Inoculated
Browse Our Archives
Related posts from Inebriate Me