3 chances to help me make muffins without sticking her hand in the bowl of flour and sugar. After the third, she was not allowed to help me anymore. Kicking screaming meltdown ensued. Morning—day OFF morning—disrupted.
Was it worth it?

Thing is, it was not about the muffin mess. I don’t mind cleaning a little flour off the counter. But after 3 times, she was testing. And the answer to that test is, if you do something mom or dad says not to do, bad stuff happens. Because next time, “no” might be about running out in traffic. Or getting in the car with a friend who’s been drinking. Or any number of things in between there that might just make her a really unpleasant person  when she grows up—someone who has no boundaries and does not play well with others.

Thing is, she is a 2, and she does not know the difference in the “NO” that means, hey, that stove is hot, and the “no” that means stop that, you’re going to make a mess. She is 2, and lacks the gift of discernment. All she needs to learn now is that no means no.

You  know who else lacks discernment? These folks, apparently:

If you don’t want to read the whole article, the gist is this: “Surry Baptist Association in North Carolina expelled Flat Rock Baptist Church in Mount Airy from membership July 26, two weeks after their new female pastor started at the church.”  The church
has been officially “disfellowshipped.” Now, I am an ecumenically-minded
person, and I know that the Baptists—all branches of them—have grown in many
ways these last 10 years or so. I also know that they are not categorically
racist, sexist, homophobics. That said… it takes a really special kind of
literalism to say that women can be ministers, just not SENIOR ministers… I
just don’t hardly know where to start.

Wait, yes I do. I will start with—discernment. Grown up people of faith are not toddlers with their hand in the flour jar. They are not small children prone to run out into traffic. And, increasingly, grown up people of faith are not accepting doctrine
that has been passed down, repressed and backward generation to generation,
boxed up and ready for consumption. Increasingly, people seeking the holy are
realizing that they have a right to think for themselves, a right to frame
their faith in the context of their own time, their own experience, their own
inborn sense of grace.

This is not sacrilege, blasphemy, or disbelief. It is the simple awareness that some scripture—especially some of the letters and law—were written for people who had not yet learned the power of their own will, their own gifts to distinguish right from wrong, and then from now. Some people who had not quite learned what it meant to all live together in faith and community.

Turns out, this pastor—who looks about 12 years old, but is actually not—has a powerfully prophetic voice in that little community of about 75,000 or so. Turns out, a lot of those 75,000 appreciate not being told who can and cannot bear the gospel to them. A lot of them are showing up at a little church that was dying, not too long ago. They want to see what God might be able to do in a place that is brave enough to cross the street without the Baptist convention crossing guard to carve out the path for them.

Again, not hating on the Baptists.  It is a specific worldview that hurts us so, and it is not relegated to any one denomination or organization. I live in the big city, and around here, it is the independent, evangelical mega-churches that pick and choose their literalisms… Of course women can serve the church! There’s the nursery, right over there. Of course God wants you to give to the poor! That passage about giving away EVERYTHING? Oh, ha ha, Jesus didn’t mean that… People flock to these churches by the tens of thousands. People who, in every other area of their lives, would be outraged if they–or their mothers/sisters/daughters/wives–were not given the same opportunities as men. But in the church, it is somehow still ok. In the church, for some reason, it is still ok to live with “because i said so…”

And on and on it goes. Are we 2 years old, or not? Are we small children who live and die by clear yes-es and no’s, or are we the living, breathing, active and present Body of Christ in a changing and hurting world? Rev. Bailey Edwards Nelson calls the grown-up faith “soul competency,” and I think that about says it. Her church—Flat Rock Baptist Church—crossed the street all by their big boy/girl self. They are a shining light to all of us who are trying to live the gospel beyond the boundaries we were given as children.

When my kids get older, I hope they will know that sticking your hand in the flour jar and making a mess is not altoghter a bad thing. But I hope they will also know that “no meaning no” when they were children, led them to be wiser and kinder adults, free to trust their own instincts and gifts, and empowered to use their own sense of direction when crossing the street. And my deeper, secret, mom hope–that even then, they will be crossing the street to get to church. A Church that has learned and grown and changed alongside them, all the days of their lives.

Also, “disfellowship” is not a word. Biblical or otherwise. 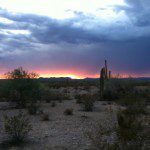 August 9, 2011 Stop Making Me Look So Hot!
Recent Comments
5 Comments | Leave a Comment
Browse Our Archives
get the latest from
Irreverin
Sign up for our newsletter
POPULAR AT PATHEOS Progressive Christian
1

Evangelicals, you have some denouncing to...
Grace-Colored Glasses
Related posts from Irreverin