Well. If I thought that telling people I was a minister could elicit a “does-not-compute” expression, imagine the gazes that accompany the latest addendum to the conversation:

“…and what does your husband do?”

“well, he recently quit his job to stay home with the kids.”

And you know, most people really, truly mean it. Once they get over the initial shock, that is. Most people get that him quitting a job he does not enjoy makes alot more sense than me leaving one that is a big part of who I am. Many people get that having multiple children and 2 working parents is a constant balancing act for which not all of us are equipped. Alot of folks truly appreciate a man who is willing to take on the full-time parenting role, embracing the counter-cultural, so that his wife may better function in both career and family.

Have you noticed that Tide has a commercial where the little girl is helping her dad fold the laundry? “Yes,” he says, “we’ll play ponies, as soon as we finish foldsies.”  IKEA shows a man in the kitchen baking cupcakes for the kids’ school function. Without a woman hovering over his inept, clueless shoulder. These are exciting times, people. It has only taken a few millenia, but popular culture is beginning to catch up with the real world a little bit. In fact, an increasing number of men have been embracing the vocational dad gig for awhile now. In some cases, this has to do with economic necessity. In others families, like my own, it is more about what makes good sense for your time, your resources, and your sanity.  And blessedly, even dads who function as primary wage-earners are alot more involved in the diaper-changing, teacher-meeting, and bow-tying than their grandfathers or even fathers were. Times are a-changing.

But really, the stay home dad is still alot like the woman minister. People look at you as if to say–well, and sometimes they even say aloud–I knew you existed, but i never actually SAW one before. As though you were a rare jungle bird come to visit the desert.

For the most part, people mean no harm. I say for the most part because, well, there will always be the Mark Driscolls, the James Dobsons, the Dr Lauras of the world who cling to rigid gender roles like drowning people to a life raft; who quote scripture all day long telling you what Jesus meant for “real women” and “real men” to do with their time; who blame the break-down of the nuclear family on women in the workplace (hello, 1970) and, you know, the gays.

Of course, the break down of the American family IS, in part, a result of women going to work. But, as a wise man once said, it isn’t the women’s fault. It’s on the men who don’t know how to deal with women working; that man who doesn’t know how to cope with the woman next to him in the boardroom unless she’s bringing him coffee; and that other man who can’t bring himself to bathe the children or do a load of dishes, even though his wife works the same 50-hour week as he does. You know who that guy listens do? James Dobson.

BUT…i digress. This is not a litany on the misogyny of the American workplace/church/culture. I’ll have that rant another day. This is a sign of life that, more and more, people are actually doing what works for their families, and not letting an invisible radio preacher, a commercial, or the Fortune 500 dictate what is “right” or “normal.”

The result? Healthier, happier families. Women who stay home with their children because they want to, not because they had no other choices. Men who parent full-time and empower their wives in the work place. Or men who work and still nurture and care for their children. Women who work and have better, more just family leave packages, because their male co-workers and bosses–guess what?–have kids at home to. Same-sex couples who raise children together and enjoy healthcare benefits and tax breaks, whether both partners are working or not…

OK, I’m getting ahead of myself in this utopian frame. But the blessed evolution is still taking place, little by little. And in its becoming, I think it fair to point out that men who stay at home with children are not simply substitute mothers.  Vocational or single dads are not sad proxys for the mother who is not around. Or “Mr Moms,” as they are called by some of those folks who mean no harm (and, some who do plenty of harm). Men as parents–whether they are home all day or coming in after work–have their own set of gifts to offer, their own brand of nurture, their own kinds of fun and wisdom to impart.

Case in point–when i am not home, my kids are getting drum lessons from their rock star dad. They get to bang on stuff all.day.long. And while i do love a joyful noise, mama’s patience for all that racket is thin. Especially after a day of work. So, rock on, drummer dad. Keep the beat. Less calamity for me when I get home.

Also, I find that my husband is a much better nurse than me when the kids are sick. It isn’t that I don’t care as much. He just seems to radiate a different level of empathy. He rocks a little longer, talks a little softer, hugs a little better. I mean, I do ok if he’s not around, but trust me… if i was sick, i’d rather have him than me.

There is more music when dad is home, more outside time, and more active play. And I will readily admit, the house is a heck of alot cleaner when he’s been home all day than after a day of me at the healm. I think it’s because his arms are so much longer than mine…makes him way better at multi-tasking.

Dads do not somehow have to transform into women just because mom left the building–whether for the day or for an hour.

Every family is different. Every family should know who has gifts for what, and feel empowered to order life accordingly. Here’s lifting up the hope that, slowly but surely, the world is coming to see that we don’t all fit so easily into little boxes of gender-specific talents and strengths.

Thanks, Tide. Thanks, Ikea. Thanks, Modern Family and Up All Night.  You make it a little easier–not to mention more hilarious– when people look at my family like we’re the rare birds that we are… 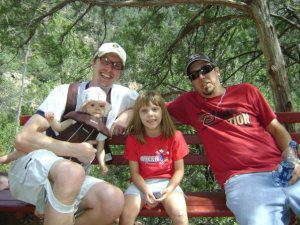 **A disclaimer: when I say “Stay-home mom or dad,” i know that those folks do not always, in fact, stay home, but have play groups, errands, appointments, and lives outside of that role. I also know that parents who work outside the home are still “full-time parents;” It’s not like you quit being a mom or dad the minute you step away from the kids. Language is a tricky thing. But you know what i mean. I hope it is clear from the rest of the post that i am all for everybody pretty much doing whatever the *%&$ they want and think is best for their family… 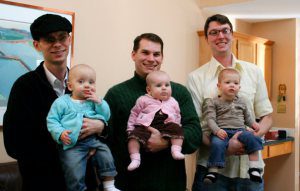 February 3, 2012 A Profound and Prophetic Response
Recent Comments
4 Comments | Leave a Comment
Browse Our Archives
get the latest from
Irreverin
Sign up for our newsletter
POPULAR AT PATHEOS Progressive Christian
1