“Good afternoon. My name is **Jane** and I’m with **Betterthanyou** ministries. I was wondering if you’d like to meet with one of our missionaries and learn more about how to share the gospel of Jesus with our Jewish brothers and sisters?”

Oh, girlfriend. You are barking up the wrong cactus… And THIS is why i usually don’t answer the office phones in the afternoon, unless it is a name i recognize on that caller i.d.

You know how you think of the right thing to say, about 4 seconds after you’ve hung up? This was one of those days.

What I actually said was “no, I don’t think so.”

What I should have said goes something like this:

“You know, as a matter of fact, I was sharing the gospel with a Jewish person, just this morning. We were talking about how utterly backward and hateful Christians can be when it comes to gay people. She shared that she has Christian friends who are gay and lesbians, and she is so glad they have found welcoming UCC congregations to be a part of. And how she was pleased to see that we are an Open and Affirming congregation, since her children go to preschool here, and she tries to teach her children about diversity, love, and acceptance. And then we went on discussing how Jesus pretty much said nothing about hating on people who are different than us, quite the opposite in fact; and that the Church tends to use scripture in ways that let people hold onto their own backward, toxic ways of looking at the world. Like saying that women can’t be preachers. Or that gay people are abomonations. Or that Jewish people need to be saved by the Christian right.”

Yeah, that’s pretty much what I should have said. Maybe I’ll call her back. While I’m at it, I can share with her my ever-growing list of S*^! Jesus Says, and doesn’t. And then I can thank her for her latest contribution to the list, which she inspired.

“Go and make disciples of all nations, and then nag the s*^! out of them, until everybody looks exactly like you.”

“Blessed are the megaphone wielders, the anti-semites, the gay bashers, and the affluent white people with a savior complex.”

“Blessed are the meek; they will inherit the earth, because they are not too busy trying to grab it.”

Don’t get me wrong. I’m all for sharing one’s faith in appropriate context. I’m all for making room at the table for people who are Jewish, Muslim, Buddhist, or some of those other fancy religions that I can’t spell. But come on, to target a broad, sweeping demographic of the world and go about trying to ‘save them’ with our super white, westernized Jesus?  It is lost on these folks that Jesus WAS Jewish. And that, without ancient Jewish law, they would not be able to uphold some of their ancient, Christian prejudices against women and gay people. (Jewish law which, by the way, most Jewish people have learned to discern and make meaningful for their modern context, without all the hateful and irrelevant extremes.)

Obviously, I am just beginning to unpack the layers of disturbing that were packed into a 30-second phone call. But since: 1) most people inquiring about the church stop by or send emails; 2) most sales folks call for the secretary, who only works mornings, and; 3) all my church folks have my cell phone number; I think, if nothing else, I’ve found a new rule by which to live through the late afternoon: 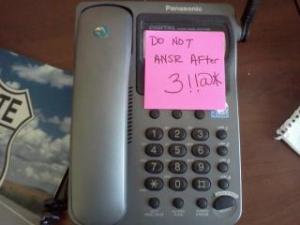 I’m pretty sure, if i looked hard enough, I could find scriptural evidence that Jesus had pretty much the same policy.

*A note: i know missionaries who are compassionate, loving, brave, and have a heart for transforming the world in its darkest, most painful corners. I am grateful for their ministry to feed, clothe, educate and comfort the suffering. True mission work can be done without proselytizing.