When it rains in Phoenix, people can talk of nothing else. Srsly. Facebook, yoga class, office, preschool, line at the grocery store…Not only is it the only topic worthy of conversation, but people in an otherwise standoffish metro sprawl area get downright chatty. A few drops from the sky and boom–instant community. Might as well be a small town in the south during football season.

Grown-up people run outisde, spending the rest of the day in soggy clothes (and with bad hair). Children think a national holiday should be declared immediately. Or at the very least, a day off school.  Whether with a sense of foreboding (the sky is falling! surely the end-times are near) or riotous celebration, even the youngest Phoenicians know that this is a day out of the ordinary, and not to be taken lightly.

My kids woke up early (EARLY!) this morning with first-week-of-preschool colds, so they were pretty fussy and clingy. And my little guy, on top of not feeling great, was terrified of the thunder. And believe me, there was plenty of it. Nearly two hours of roar and rumble before it went ahead and rained. With every great boom from the sky, he would run to me in a clambering, climbing panic. (why does this boy STILL not understand about mama’s coffee time, and the cup of hot liquid that is permanently fixed to my hand this time of day?) I’d pick him up, he’d holler a minute, then he’d be fine. Back to Dora for a minute. More thunder. More screaming. Repeat.

When finally, finally, it started to rain for real, i took him, not to hide in the closet, but outside in it. The thunder was no longer an unseen terror, but the source of this wonder falling from the sky. Like the rest of his city this morning, my little one stilled whatever impluse had sent him, scattered and hurried, through the morning; and witnessed instead the miracle of clouds, dust, water, and temperatures falling below 80-degrees. He took a deep enough breath, in the mystery of it all, to stop hollering and simply soak it in.

Rain is a gift of nature, in any time and place. But in a parched and dusty valley, it is a daggone gift from on high, and every single one of us knows enough to stop hollering for a minute and pay attention. Even on a weekday. Even in an election year… 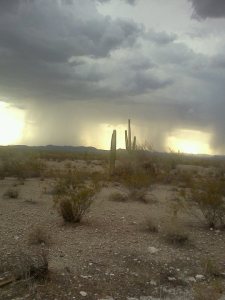 September 6, 2012
The One Where I'm the Grownup
Next Post

Prison, Solitary Confinement, Hermitage, and Social Distancing
People in religious traditions with major holidays in April this year are...
view all Progressive Christian blogs
What Are Your Thoughts?leave a comment
Copyright 2008-2020, Patheos. All rights reserved.