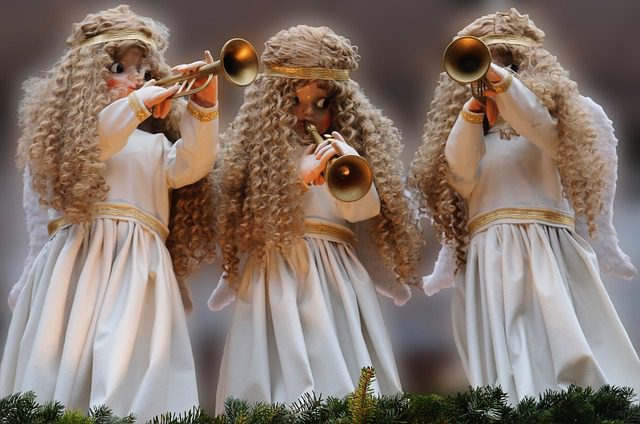 On the first day of Christmas my true love gave to me…Some grating, tedious songs that get stuck in your brain like a tiny piece of caramel corn in your teeth; like flecks of glitter that you’ll NEVER get out of the carpet; like a tiresome metaphor that some blogger just can’t let go…

Anyway. My grandmother hated “The 12 Days of Christmas.” She was a gentle soul. She loved most people and never wanted much excitement in her life and I rarely saw her fired up about anything. But man, she hated that song, A LOT. So of course we sang it to her always.

Sure, it’s a terrible song. But it is not THE worst thing out there in Christmas music. The thing is—there is bad music all the year round. Why is it that bad Christmas music is so especially, terribly, mind-meltingly BAD?

Maybe it’s because Christmas music, on the whole, is supposed to be so very GOOD.  When the angel appeared to Mary, she sang in response. We call it “The Magnificat,” and it contains some of the most powerful and prophetic words in scripture. And then, those angels showed up and sang to the shepherds on the hillside. Good news! Great joy! We can only assume that was a hella good concert.

So we can’t help it if our expectations are high when it comes to seasonal tunes. It’s biblical. We want good news! We want great joy!

Somewhere along the line, Hollywood and Dollywood got hold of our Christmas soundtrack, and it was all downhill from there. Granted, some of the results are deeply meaningful (good news). Others, just plain fun (Great joy!).  And what makes Christmas music good/bad is not as simple as sacred or secular designation. Because the Muppets and John Denver, y’all…that is great joy. And some of the worst are songs that are supposed to be sacred, but really just make you want to club an elf over the head with a giant candy cane.

Here are the Ten Songs that Ruin Christmas, every single time.

1. I Saw Mommy Kissing Santa Clause – Nobody cares, kid. Guess what, IT’S YOUR DAD in the Santa suit. I hate to ruin that for you, but you’re a little creeper who should go back to bed.

2. I Want a Hippopotamus For Christmas… Otherwise known as LeAnn Rimes and her bedazzled microphone make baby Jesus cry.

3. O Holy Night. Which is a lovely song when real people are singing it. Like, in church. But then Josh Groban, Celine Dion, or Clay Aiken got ahold of it and each, respectively, stretched every syllable into three and butchered the high notes like a Christmas ham.

4. Grandma Got Run Over By a Reindeer It’s one thing to torture your grandma with annoying Christmas tunes… it’s another thing entirely to celebrate her yuletide demise. Also, who let her drink so much? And then try to walk home in a blizzard? I’m starting to feel like the best grandkid ever.

5. Rocking Around the Christmas Tree/ Most Wonderful Time of the Year/Holly Jolly Christmas  I lumped these together because they are equally terrible in the same kind of way. Christmassy words set nonsensically to music does not a Christmas song make. Maybe it WAS the most wonderful time of year, until y’all started singing this awful mess. And also, who tells scary ghost stories at Christmas? WRONG HOLIDAY.

6. Baby It’s Cold Outside  When people first started calling this the date rape song, I called b.s and thought they were over-reacting. But as more and more attention has been called to rape culture, especially on college campuses, that whole “hey, what’s in this drink?” thing gets hard to ignore. Also, pssssst… Just because it says ‘cold’ or ‘snow’ or ‘winter’ does not mean it’s a Christmas song. (Somebody tell that to the people who put “My Favorite Things” in the holiday rotation.)

7. Last Christmas So you’re having a lovely December day of shopping and sipping cocoa and visiting the elderly and then WHAM! This business comes on your radio and you are suddenly in elf-clubbing mode again. I’ll give it to someone special, alright… With my fist.

9. Do They Know It’s Christmastime… (sigh). Yes, we are ever so mindful of the poor. But to thank God it’s “Them instead of you” is sort of missing the whole Baby Jesus POINT of things.

And, by popular demand…

10. Christmas Shoes  Listen, it’s great that you want to buy those gold shoes for the kid with the dying mom. I’m all for generosity, Christmas time or elsewise. But… a) it’s cheesy, and manipulative. This song tries to make me feel feelings that I don’t have for pretend people, maybe because my heart is 3 sizes too small.  And B) it embodies some hard Advent-y realities… Like the truth that we’d rather serve the dying than the living. Or to put it another way: we too often place our faith in ‘meeting Jesus someday,’ rather than living in the impossible paradox of his coming incarnation. We look to a far-off heaven, rather than trying to prepare a place in our midst for the poor, the stranger, or the vulnerable child.

And maybe that’s why so much of our holiday music is so straight up terrible… Because it’s been used to create a deceptively comfortable, cozy environment. In which to shop.  When in fact, all is neither calm nor bright. For all its tinsel and shine, the world is not as it should be.  And we are partly to blame.

What? I told you my heart was 3 sizes too small… you wanted something uplifting?

How about this: Love is on the way. Hope still sings to us in the night, and joy comes in the morning. There are songs for that, too. GOOD songs. With Muppets. Maybe that’s next week’s list.

Until then… sing on, y’all.

Postcards from the class & culture...
slacktivist
Related posts from Irreverin