Writing, Rushdie, and My 12 Year-old Self: Thoughts on the Charlie Hebdo Shootings

Writing, Rushdie, and My 12 Year-old Self: Thoughts on the Charlie Hebdo Shootings January 12, 2015 Erin Wathen

When I woke up this morning, I expected to write about writing. I’d just completed a three month experiment with my own blog—committing to write a story (fiction, memoir, poem, or something) every day over that time period. I expected to reflect a little bit about the discipline of writing daily, the power of storytelling in our lives, and how creating (a story, a painting, a meal) is a spiritual practice.

But then I checked the news.

And this had happened. And so I’m writing about writing—but not in the way I expected to.

As a writer and minister, there are few things I value more than freedom of speech and inter-religious respect/dialogue/tolerance. So a band of fundamentalist gunmen walking into a staff meeting of an edgy, provocative satire rag and murdering cartoonists and journalists felt strangely personal. Though Islam is not my religion, France is not my country, and cartoons are not my genre of choice, I’ve felt on edge all day.

I’ve been thinking about how, in middle school, I first heard about Salman Rushdie and The Satanic Verses. Even though it would be years before I actually picked up Rushdie’s book (which is awesome, funny, and heartbreaking, by the way…), he became a hero for a kid who dreamed of someday becoming a writer. A fatwa against a writer? For twelve year old me, that was fatwa against all of us who imagine, write, and dare to dream. I probably shook my fist at the Ayatollah from my childhood bedroom.

But I’ve been thinking about other things. The things that make this so complicated—Race, Nationalism, Islamaphobia. I’ve been thinking about the fundamentalist criticism of Charlie Hebdo’s brand of satire, the violent attacks sustained by the publication over the last few years, and the very complex dynamics that emerge from how Islam and a “Secular”France with its Roman Catholic heritage, immigration and nationalism, multiple cultures within a society and harsh economic realities all interplay.

And I can’t help but think about how Muslims across Europe and North America must feel right now. The questions on their minds—Are their communities again under suspicion? Is a glance from a stranger a veiled threat? Does walking into a mosque in Joplin, MO put a middle class Muslim doctor at the same risk as a journalist walking into a magazine on an Al-Qaeda hit list?

And so I find myself in a place of ambiguity, not anger, though I think the murder of writers, artists, poets, and jokesters for being truth-tellers, provocateurs, and visionaries is repugnant. And while that would certainly be a disappointment to my hero Rushdie, whose criticism of religion has become rather one-dimensional over the years, especially compared to the nuanced storytelling in his novels (though, honestly, given his experience, I can hardly blame him), I just can’t join him in using words like “Medieval”to describe this violence.

And I blame that on my love of stories. Of writing. Of words. Of scriptures of many traditions.

And writing stories—that’s about digging into the dirt out of which we are created and like all of the storytellers before us, re-creating the world we see, or hope for, or laugh with, or—yes—laugh at. It is about being daring, being vulnerable, and being brave. And trying. Even when you know what you’re looking on the page is ridiculous. Or awful. Or even offensive.

Because those things need to be told, whether they’re beautiful, funny, horrific, or all of those things at once.

Brandon Gilvin is a writer, ordained minister in the Christian Church (Disciples of Christ), development worker, and consultant. He and his wife Lisa live in the Kansas City Metro area. Brandon blogs at everydayheresy.wordpress.com 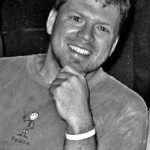 January 14, 2015 Family Value(s) Meal
Recent Comments
0 | Leave a Comment
"When the United States began, most patriots considered their patriotism in relationship to their home ..."
Caliban Whose Flag Do You Carry?
"All peace and joy on your journey!"
Patrick Along For The Ride
"I'm sorry to hear about your daughter. It's heartbreaking to hear of a parent burying ..."
Cynthia 10 Ways to Care for Someone ..."
""I'm so very sorry/I'm so sorry for your loss," sincerely meant, is actually enough...no religious ..."
J.D. 10 Ways to Care for Someone ..."
Browse Our Archives
get the latest from
Progressive Christian
Sign up for our newsletter
POPULAR AT PATHEOS Progressive Christian
1

The IMDB "Goofs" page for the...
slacktivist
Related posts from Irreverin