She was a voice in the wilderness.

Many say that Rachel Held Evans was the first person who ever told them it was OK to question their faith. Or the first to open a more critical and discerning look at scripture than their rigid doctrines had previously allowed. She told many women, for the first time, that they were worthy of leadership, and that the Church needed their voices. She told LGBTQ brothers and sisters that God loved them, and that if the Church could not accept them as whole and beloved, then it was the Church’s loss. For many, this voice in the wilderness was the first point of light in a new and awakening faith. In her take-no-prisoners approach to challenging long-held assumptions of Christianity, countless people found God again, and stepped into new life.

Unlike many of her readers, I was raised in a tradition that valued women’s gifts and invited questions. While Rachel Held Evans was not the first voice I heard in affirmation of my beliefs, her work opened my eyes to how rare and extraordinary a gift I was given by the community that raised me. It made me want to do more with the freedom I’d been given; and made me all the more grateful that someone like her had a platform to share that brand of good news with the world.

That platform—which started as a blog and grew to several best-selling books, and speaking gigs to sold-out venues—was her pulpit. Through it, her voice reached more people than most of us actual preachers will ever speak to in a lifetime.

Her life and work were, of themselves, a wonder. But what is downright miraculous is that she changed so many lives through such unlikely connections. With just a keyboard, she entirely transformed public conversations about faith. Many of those most powerfully impacted by her work never heard her speak, never met her in person. How can words on a screen—a series of letters typed on a keyboard, possibly several timezones away—take on such a life of their own?

Her digital platform emerged as an unlikely pulpit for reclaiming women’s voices in that conversation; but the threads of conversation that followed her blog posts were preaching moments of their own. Like most progressive Christian writers, I learned much from her writing and her presence. But more than anything, she taught me how to take on a blog troll.

If you are a woman who has a public presence, you are going to face these guys. (OK, sometimes girls. But mostly they are guys). They are the embodiment of toxic masculinity; they run clinics in sanctimonious mansplaining; they delight in citing scripture to silence women; and they often travel in packs, amplifying each other’s toxic rhetoric and taking the initial conversation down endless rabbit holes in pursuit of “truth.” For these guys, “truth” seems to always uphold their own prejudices.

In any case, Rachel Held Evans was having none of it. Whether in the literal comments section of her online platform, or in a public space with a live audience, she is known as one who could face down these angry guardians of the patriarchy with strength, wisdom and a fierce grace. “Fierce grace” sounds like a paradox, but it was her. In engaging those who loudly disagreed with her and challenged any authority she had earned, she stood strong in who she was, and in who she knew God to be.

In those moments, she modeled the biblical principal of “turn the other cheek” as well as any living example I can think of.

When Jesus said to “turn the other cheek,” he did not mean (as many literalists claim) to turn away and let your enemy hit you again. He meant turn and go in another way. Transform the situation. And that is what Rachel Held Evans did, time and again. She refused to let the haters control the narrative. Nor would she get down in the dirt with them. Somehow, by engaging with love, she shifted their position and threw them off balance. She challenged assumptions, she rejected the premise of the question, or (also very Jesus-like) she answered a question with another, better question.

The way in which she navigated conflict was every bit as much an art form as her writing itself. We often refer to the “comments section” as the outer darkness of the digital world, that place where people who love their lives will never step of their own accord. And yet, in her spaces, even the comments section was sacred space. Every thread was a pulpit. Every question, an invitation to witness to the light.

While I was learning from her how to engage the uglier parts of the “Christian” internet world, countless others were finding words that literally saved their lives. She would not be deterred from speaking love to hate, and speaking affirmation where others wanted only to close doors. In her response to angry challengers, her readers overheard the same sermon again and again: “You are loved; you are worthy; you are whole.” And as with scripture itself … the overhearing is often more powerful than the direct word.

Like the rest of the Christian writing world, I’m feeling the weight of this loss, the void left by her death that no other voice will ever quite fill. And maybe we shouldn’t try to fill it. Maybe the best way to honor this good and faithful servant is to let there be a silence there for a time. Let the silence speak its own truth to the breach.

I add my prayers for peace and comfort for her grieving family. I cannot fathom the depth of the loss they are feeling, nor what it takes to absorb such a shock. But my hope for them is that, in remembering her—now, and in years to come—they will not just read the words she wrote, or even just the wonderful and glowing testimonies of those whose lives she changed for the better. I hope her children will also someday wander into the digital spaces where their mother faced adversaries. Places where she was not welcome and where her voice was not wanted. And they will find that, even there, she had no fear. Even in a place of death, she embodied a good news that had to be heard, that refused to go unspoken.

And that speaks still. 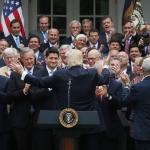 April 25, 2019
It's Time For a Woman President, And It's Not About Identity Politics
Next Post 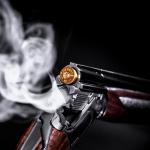 May 8, 2019 At the Altar of the Gun: High School Shootings and the Sin of Blood Atonement
Recent Comments
0 | Leave a Comment
Browse Our Archives
Follow Us!

Trump Has Dropped the Ball about...
Kermit Zarley Blog
Related posts from Irreverin