Sacred Dissent: The Legacy of RBG, and What Comes Next

Dissent is the beginning of progress.

Every time we push against something that is holding back the fullness of life for someone–whether an individual or an entire demographic of people– transformation is possible. In that moment, something shifts. A door opens, and change, though not inevitable, becomes a visible thing on the horizon.

Few people in the world have used their voice of dissent as effectively as Ruth Bader Ginsburg.

Last week I posted on my social media page that I hadn’t been able to write lately because I’m too angry. Sure, a bit of righteous anger can be a catalyst for other, more productive things; but the heaviness of all that’s happening in the world right now– and the shear volume of people and systems bent on perpetuating evil these days– was just more than I could articulate a word against. It goes like that sometimes. I run out of words every now and then. And (believe it or not) even I have a filter. I try to never just rant and rage without having a good word or a way forward.

The death of RBG, on top of everything, seems an ill-timed cruelty we can’t bear. And I’m not going to try and talk anyone out of the deep grief that is the loss of her; or the anger, when all she worked for is now at risk. There’s no denying the blow, that she died the very same week we found out women in ICE custody are enduring systemic hysterectomies for no medical reason; that she left us when there is a shameless misogynist in the White House; or that the past few decades of LGBT rights could be rolled back in just a few short months.

Part of my personal struggle lately has been feeling like the Church, or really, the whole Christian narrative as we know it, does not hold space well for complex emotions like grief and outrage. As a faith leader, I can fall short in giving space for those things myself. It’s no wonder my own anger has had nowhere to go. So before I try to give anyone a snappy pep talk about what comes next and how to honor the legacy of such an icon for justice and equality– we get to be sad first. 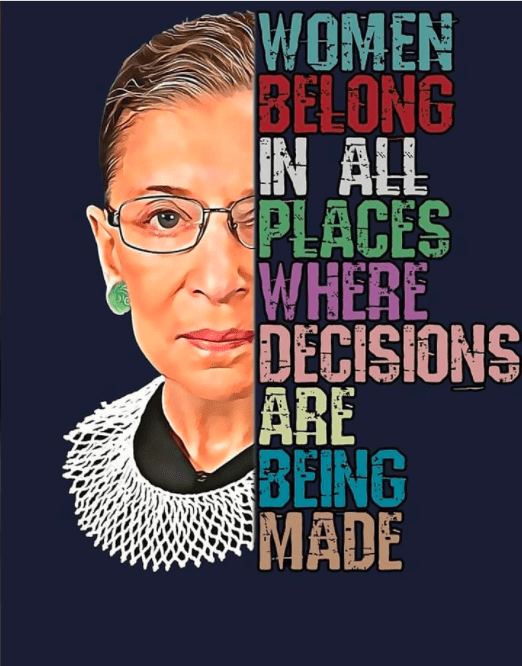 First, we mourn the loss of HER, the person–not the legend, the icon, the protector and defender of our democracy (we’ll get there). She was a beloved wife and mother, someone’s daughter, a friend to many, and a child of God. She was so much more, but in all the widespread veneration, let’s not forget this basic truth- she was a human being.

Let’s also grieve, for a moment, that so many women whose lives are better because of her, who’ve had opportunities that their own mothers and grandmothers could never have dreamed of, will not recognize this passing with any kind of sadness; that many who’ve benefitted from her incredible leadership will see this, not as a loss, but as an opportunity to roll that progress back by decades. And I grieve that my own daughter may grow up in a reality that is vastly different; or, that her generation will grow up taking for granted the rights she championed, without ever really knowing what it cost her.

And yes, let’s also acknowledge what it cost her- she never got to retire. The stakes were too high, and she knew that everything she’d worked for would be vulnerable if she left an empty seat in the current climate. She soldiered on because she knew what she was protecting.

On that note, we also grieve because we know what comes next. It’s going to get ugly. A certain base of single-issue voters are going to get fired up and mobilized. There will be misinformation; toxic partisan squabbling; and a stunning display of hypocrisy on the part of those who once said you can’t appoint a judge in an election year. That is going to be a different story now. Meanwhile, the conversation about women’s equality will be reduced to a fight about our bodies– and not just our bodies, but a single part of our anatomy. Discussions about what is sacred, what is meant by ‘life,’ will be reduced to this single matter as well. There will be no deeper dive into the more complex issues affecting the health of women and children in this country; no meaningful discourse about how to truly value life. It’s going to be gross, and there’s no way around it.

And a particularly heavy truth that’s lurking in the background: the Supreme Court is probably going to have to decide this Presidential election. There will be no clear outcome right away, and that is by design. There will be fear and mistrust around the process. Conspiracy theories layered over the complications of a pandemic will amount to chaos. The current administration is drafting this mayhem as we speak; they’ve laid the foundations to contest any number of outcomes. And, as we’ve witnessed over the past six months, most of our systems are too fragile to weather this particular storm. The determination of who our next leader will be is going to end up in the hands of the highest courts. And yes– it is utterly terrifying to envision how this goes down without the pillar of strength and measured wisdom, wrapped in an iconic lace collar, placed securely in the center of this moment. More terrifying still to think of who might be in her place by then, and what voice he (yes) will bring to the chaos.

It’s dark. There’s no denying it. Democracy hangs in the balance. Not to mention women’s autonomy.

Today is a new day. And in the Jewish tradition– it’s a new year.

Ruth Bader Ginsburg died on Rosh Hashana, and as NPR’s Nina Totenberg tweeted: “A Jewish teaching says those who die just before the Jewish new year are the ones God has held back until the last moment because they were needed most & were the most righteous.” A Jewish rabbi also shared with USA Today that “If one dies on any Shabbat they are considered a Tzadik [a righteous person] …  more so when it’s on the new year.”

I find this little tidbit of Midrash (Jewish wisdom) incredibly life-giving today. Maybe it’s purely symbolic, but it’s still meaningful. Because that kind of righteousness does not fade out of existence just because the one who embodies it has died. Righteousness is a path for the living – and it is still available to us, even when someone who has walked it well is no longer there to lead us.

Really, isn’t that very belief the heart of our own tradition?

Anyone who has ever lost someone they loved knows this: the best way to honor someone’s memory is to embody what you most loved about them. To keep going in the way they would go.

The way of Justice Ginsberg was the way of justice; the way of wisdom; and the way of righteous dissent. Her’s was a voice that carried, and will continue to carry through history. But not without us.

Few people in the world have used their voice of dissent as effectively as she did. Granted, her ‘I dissent’ carried a heft that few of us possess. But never think for a moment that our own voices, combined with the weight of a few others–or a few hundred, or a few thousand others– does not hold the same transformation potential: to bring about progress, and the fullness of life for many.

Sit with this darkness, the weight of all we hold right now, for as long as you need to. But then, get to work. Because, as the woman said: “”Real change, enduring change, happens one step at a time.” And we are still here. Get to stepping.

September 23, 2020 Racism Is The Emergency: News From Louisville
Recent Comments
0 | Leave a Comment
Browse Our Archives
Related posts from Irreverin