R2P: The Insanity of the White Man’s Burden

In a question about whether there was any situation in which a bombing campaign would be effective on the Syrian regime, Juan Cole, Professor of Middle East History, didn’t hesitate, “No.” Cole, an informed and levelheaded critic of Middle East policy, describes in bleak terms the complexity of the situation in Syria. Look at the map below, and the story about it, and one can easily see the complex and multifaceted nature of the country. It is an utterly manufactured state by the colonial powers of the early twentieth century. It is now led by the Alawite Assad regime, a group that accounts for only 12 percent of the country—a  Shiite sect, which has ruled this Sunni majority country with an iron fist. In a stunning turn of events, the Syrian regime now receives 70 percent of its war funding from Iraq (a U.S. ally). The Iraq Shia government doesn’t want Sunni leadership in Syria, which could further encourage the Sunni minority in Iraq. 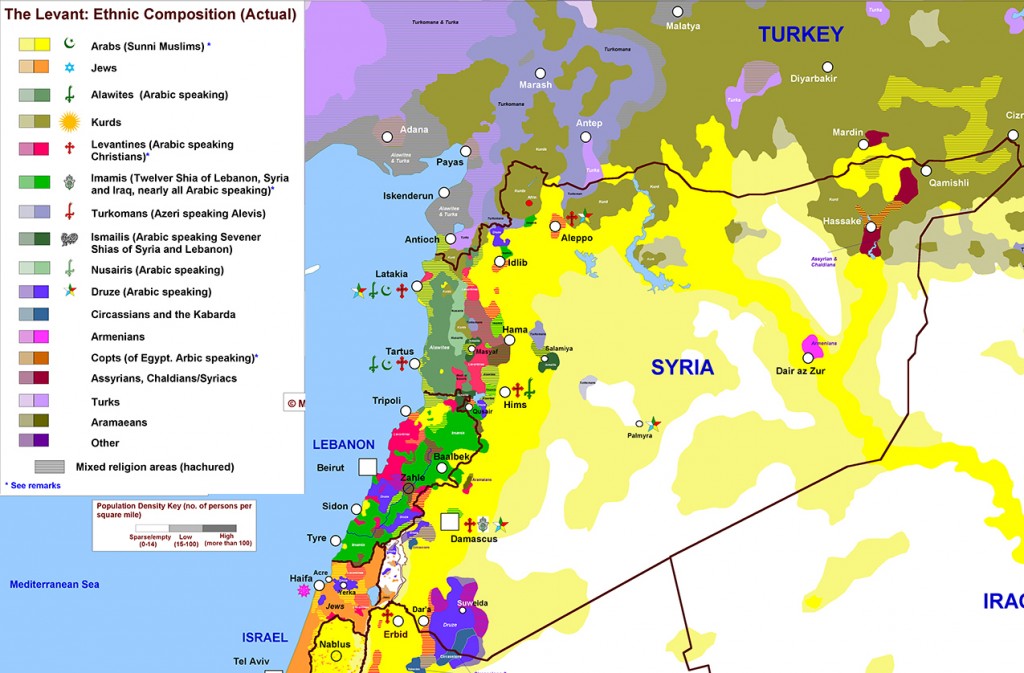 Adding to this complexity is that there is no international community consensus on any of these issues. Russia supports and arms Assad in Syria, and China rejects the U.S. attempts to stop Assad. As Cole described it, this is a “quagmire.” Syria’s future is bleak no matter who rules it and a bombing campaign by the U.S. is not a solution, but only a further provocation. U.S. bluster about the use of chemical weapons is nothing short of hypocritical–we looked the other way when Iraq used them extensively against Iran in 1983, when the U.S. was then “friends” with Saddam Hussein.

The R2P (Responsibility to Protect) is a 2005 doctrine developed by the United Nations, based in part on the “successful” bombing campaign in the 1999 Kosovo War. An event that NATO deemed a “humanitarian war,” arguing that the deaths of thousands was avoided. Of course, the legality of the intervention has been disputed and it real effects debated. In the Independent International Commission on Kosovo, entitled “The Kosovo Report,” it was found that, “the NATO military intervention was illegal but legitimate.”

Needless to say, the effects of Western intervention on the Middle East have been mixed at best. The legacy of Western Colonialism shadows the whole Middle East from Turkey to Yemen and that’s the point.

All of this is the legacy of Rudyard Kipling’s unintentionally ironic poem, “The White Man’s Burden: The United State and the Philippine Islands.” The poem was published in 1899 by the novelist and poet to urge the U.S. to take up the burden of empire. Needless to say, it worked. Our record of intervention has done nothing but escalate over the last century. We are now the arms dealer for the world, and our knee jerk reaction to almost every international “hot spot” is to bomb it, invade it or to sale arms.

One can see this “burden” in the face of John Kerry, the U.S. Secretary of State, as he argues that the use of chemical weapons is a “moral obscenity.” And, to be sure, “anyone” would think this is true. But let’s step back, who are we to call this a moral obscenity? The U.S. now has admitted to torture in the 21st century; we kill people in states that we have not declared war on, with drones; our “interventions” in Iraq and Afghanistan have led to the deaths of more than 100,000 of their citizens. How is any of this not a moral obscenity?

Now, the objection, of course, is that Saddam Hussein and Osama bin Laden are both dead and isn’t that a good thing?  But let’s review our record of interventions, starting with the Philippine War of Independence from 1899-1902 (a title chosen by Filipino’s), and moving through Vietnam, multiple incursions into Central America and the Middle East—how has the “white man’s burden” really worked?

We still seem to find a moral “boost” from beating our chest and arguing, “something must be done!” But what must be done? Bomb the Assad regime in Syria? Invade Iraq? Destroy Libya in order to save it? Support regime change in Egypt? Send more weapons into the Middle East? Support Israel with weapons as they build more housing on the West Bank?

I don’t have the answer but I certainly don’t believe doing what we are doing now is the answer. Perhaps the ultimate irony is that our black president now seems deeply ensconced in this “white man’s burden,” or in more palatable terms, R2P. As I’ve written before this is the “social gospel” converted into international policy, and liberals Protestants as much as Christian conservatives now support this more than ever.

It just seems to me it’s time to rethink all of this. Otherwise, the old cliché is more true now than ever: Insanity is doing the same thing over and over again and expecting different results. Isn’t time to stop this madness? Or, at least, should we not question it? I thought I voted for Barack Obama because he would do exactly that—and I am now certain that this is not true. It’s time for Americans to speak up before it really is too late.

September 7, 2013 "America has no business in the Middle East"
Recent Comments
0 | Leave a Comment
"I recommend this as reading for those who are really in grief. I've relied on ..."
Don Davies Job, Grief and Being Sticky-A Sermon
"Do you mean that we should not have a separation of church and state? If ..."
Judgeforyourself37 Time for a New Confessing Church
"James, I'm new to your work and who you are. Hey, I appreciate what you ..."
Peter E. Watts Driscoll on Patheos: My Request for ..."
"I think the designation "Mainline" had more to do with mainstream theology than with being ..."
jekylldoc Bullish Times for Religious Progressives?
Browse Our Archives
Related posts from James Wellman on American Religion