So you know that whole argument about whether the Catholic church must preserve its ancient teachings or conform its moral teachings to the times we live in, to get more customers in the door?  OK, fine, they wouldn’t say “customers,” but it sure seems like those making the pitch for the latter approach think that way.

That debate is apparently happening within the Boy Scouts, too, and I’m a bit peeved that it’s happening at the top levels without local scouting families being notified in any way, and I’m worried that we’ll just read the outcome in the paper.  But here’s the latest report, already a week old, from NBC,

Leaders of the Boy Scouts of America will take the first tentative steps Thursday toward considering whether to add more opportunities for girls in an organization that has been primarily for boys since it was founded 107 years ago, according to scouting officials.

The subject will be discussed at a meeting of chapter representatives and other leaders at the organization’s headquarters in Irving, Texas, the officials said. . . .

At Thursday’s meeting, scouting leaders will discuss whether to open up more programs to girls and even whether to create some girls-only programs within the Boy Scouts, according to one scouting official. Some local scouting leaders said they thought admitting girls to most other scouting programs might also be discussed, including whether to allow girls to earn the highest rank of Eagle Scout.

A scouting official, however, said that Thursday’s meeting is not intended to consider making the entire program coeducational. . . .

After decades of refusing to adjust its membership rules, change has been in the air for the Boy Scouts. The current president of the organization, AT&T CEO Randall Stephenson, told its annual meeting last year that it must adapt in order to grow.

“We have one purpose — develop leaders by teaching them the scout law. That’s the end game. And I believe very strongly that we’re going to have to change if we’re going to succeed in that purpose,” he said, in a 12-minute address that offered no specifics about how scouting should change.

Now, I think Stephenson has missed the point of Boy Scouts entirely — it’s about citizenship and character development, not this obsession with “leadership” that permeates everything, to the point that my son had to write an essay on how he “showed leadership” in order to get into the National Honor Society, with incidental comments in the directions that you could be a “good leader” by being involved in community activities, even without actually being a leader.  It’s why the number of high school clubs multiply, so that everyone can have a chance to have a “leadership role” rather than just being a participant.

And he’s just as vague on who the target of leadership development is.  I’ve said before that a co-ed Boy Scouts might be great for girls, but in those middle school years when boys aren’t as mature, they’ll be at risk of being left behind.  If Stephenson and others think that they can boost membership numbers by bringing girls into the main Cub Scout and Boy Scout programs, and even gain more high-achieving scouts because of the girls, and if the end result is two great programs for girls but nothing that meets boys’ specific needs, then they’re pursuing the superficial “customer growth” over staying true to the Boy Scout mission of helping boys.

(There is also a real difference between average boys and girls in terms of interest level in camping, especially when it comes to rustic “kybo” camping; in the long term, no matter what the intentions are, a co-ed troop could easily be watered down, if you bring in girls, then find that too many of them don’t stay with the program if your camping venues don’t offer flush toilets.)

And, incidentally, the NBC article was from May 4th.  Nothing since then, except that I found out about it from a stray comment in the Tribune’s article on the Mormons leaving Boy Scouts, with respect to their high school boys.  I’ll link the non-paywalled New York Post here (it’s actually an AP article), which has the same comment:

In Thursday’s announcement, the church said that it learned recently that the Boy Scouts are considering admitting girls, but that its decision was made independently of that.

Also, incidentally, the Mormon departure doesn’t surprise or trouble me too much; they basically used Boy Scouts as a part of their Sunday School/youth group program, but had an entirely Mormon-specific program for girls (the Young Women program) which is more focused on faith, and is international.  So the Mormon rationale of wanting a similar program for boys that they could implement internationally makes sense, given how centralized everything is in the LDS church, and doesn’t just seem like an excuse to leave the Boy Scouts in the wake of their recent changes.

Update:  well, turns out I found the 12 minute speech; it was from a year ago when Stephenson first became president, and it’s pretty bad.  He seems to think of Scouting as just like a corporation, all about growing revenues (participants and donations in the former case, customers and purchase in the latter), and spoke at length on the need to change with the times:

“Do we really want to grow this movement?” Stephenson asked the crowd at the BSA’s annual meeting last month in a 12-minute speech you can watch below.

Yes, of course, the crowd responded.

“Then the changes that we’ve experienced over the last three or four years are the first steps of what’s going to be required to truly grow this movement,” he said.

Again, no explanation on what kind of “change” he had in mind, if indeed, he had any specific changes in mind, but a mindset of “to boost our numbers, we need to change, to produce what customers want.”

Image:  Boy Scouts.  eh, for the time being.  I suppose I might have to find a different generic picture if the Scout leadership continues on its current “accommodation” path.   By David Fine (This image is from the FEMA Photo Library.) [Public domain], via Wikimedia Commons

May 11, 2017
From the library: The New Koreans, The Story of a Nation, by Michael Breen
Next Post 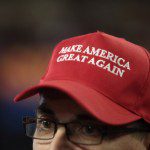 May 15, 2017 So, President Pence, eh?
Recent Comments
0 | Leave a Comment
Browse Our Archives
Related posts from Jane the Actuary